FC Antrim are on the ball! 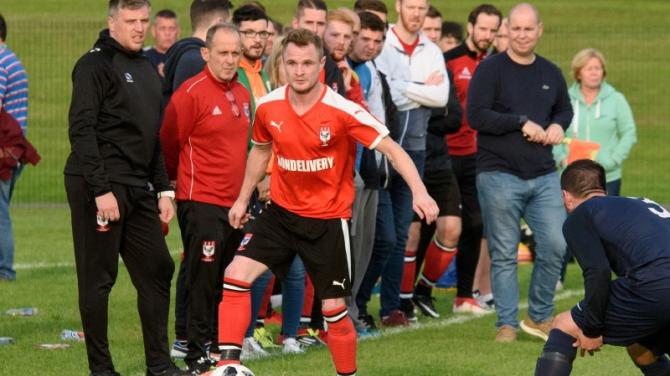 AN early season encounter with another newly promoted team saw Antrim take on Galgorm Blues, with Antrim coming out on top to show they will be amongst the promotion chasers this season.

Galgorm tried to take control of the game from the get go but were restricted to playing a long ball game as the first half was pretty scrappy with little in the way of goal mouth action at either end.

The second half saw Galgorm push for the opener, but Antrim stayed strong and got the opening goal themselves when they won the ball back and broke quickly up the pitch.

The ball was played out wide left to Conor McAuley who took his man on and crossed a low ball across the six yard box to the in running Eoghan Gribbin who made no mistake and tapped it in, giving his side the lead.

Galgorm pushed for an equaliser but the Antrim defence were doing their job brilliantly, with centre halves Colin McKeever and Sean McCashin both having fantastic games in keeping Galgorm at bay and restricting them to long range shots.

The second Antrim goal came on another counter attack when McCashin won the ball back.

Clearing to Conor McAuley, he played a quick one-two with Miles Devine which set him clear and he curled the ball home from 14 yards out.

Galgorm were then reduced to 10 men, but got a lifeline in the game soon after when, despite the best efforts of Ihan Westerhuis, Aaron Wilkinson scored from the spot after a hand ball in the box.

Galgorm almost found the equaliser but for a brilliant save from Ihan Westerhuis who dived low to keep out a shot from George Young.

Antrim dug in and in the 90+ minutes Miles Devine was played through one on one with the keeper who he rounded and finished off a great performance and win for Antrim.