Newpark come from behind to win... 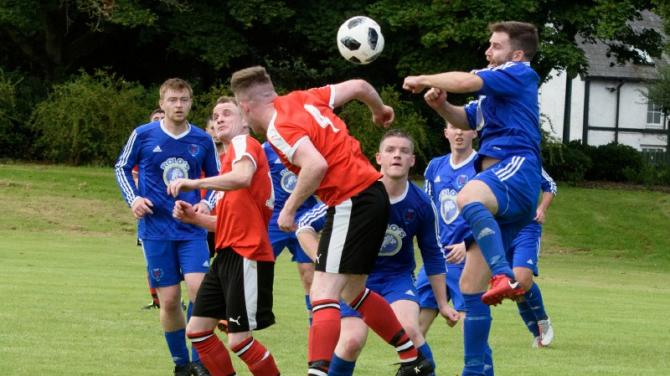 THIS firmus energy BSML Division 2 Antrim derby pitted two sides against each other who will be hoping to fight it out for promotion, and it was Newpark who edged this encounter to move to the top of Division Two.

The first half was a cagey affair with both sides fighting for supremacy and it was FC who got to grip of the game best in the first half taking the lead on 25 minutes.

Miles Devine, who had caused Newpark early problems, was fouled in the box and from the resulting spot kick Conor McAuley made no mistake to give his side the lead.

Newpark almost drew level before the break but Jamie Nutter was denied by Ihan Westerhuis.

Newpark came out of the traps quickly in the second half and drew level five minutes in when a good move involving Steven Brown and Henry Nutter sent Jamie Nutter clear. His shot was pushed out but Johnny Hunter followed up to level the game.

Ten minutes later Newpark took the lead when a long clearance from Stuart Burrows evaded the FC defenders and Jamie Nutter raced on to the ball and smashed it into the net.

It was Newpark in control now and they opened up a two-goal cushion with 14 minutes to play. David Killen and Johnny Hunter combined down the right with a slick one-two to set the former clear and he crossed for Jamie Nutter, whose shot was saved but Henry Nutter followed up to score from close range.

Stuart Burrows was a colossus for Newpark after this as he cleared almost every FC attack as Newpark kept them at bay and almost added a fourth goal late on when Jamie Nutter hit the bar with a header, but they had done enough to claim all three points.