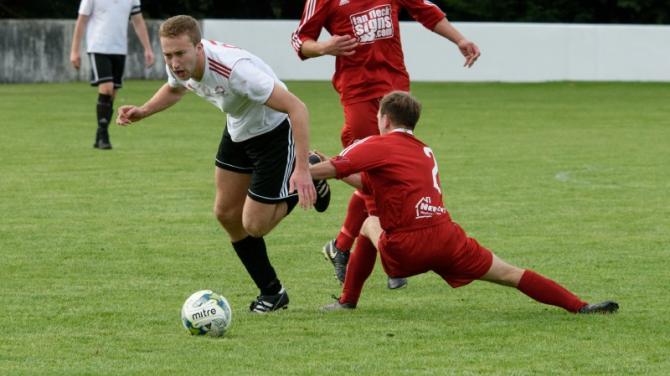 WITH both sides still on ‘nil points’ something was bound to change after Saturday’s derby at Allen Park, and it was Chimney Corner who were celebrating afterwards, with a three goal victory over Ballynure Old Boys.

Oddly enough, both sides thought they had already broken this season’s duck, as Chimney and then Nure both enjoyed victories over Sofia Farm, who then pulled out of the league and thus their matches were ruled null and void.

Corner manager Kingsley Burrows said: “I thought we controlled the game, we were in possession most of the time, apart from the first 25 minutes.

“After that, we looked the fitter side.

“We have a young team; our average age was just 21!

“We took a lot of confidence from the Bangor game, for, even though we lost, they showed they were highly capable of playing and doing well at this level.

“The vibes were good in training during the week.

“We could have made it more comfortable; 5-0 probably would have been a better reflection, but we’re more than happy with the points – and our first clean sheet!”

Meanwhile, Ballynure official Michael Graham lamented: “We gifted them all three goals, it was hard for us, having so many players missing, we were down to the bare bones!

“And most of those would have been starters!”

Corner, meanwhile, were once again without a recognised keeper, though it mattered little in the opening quarter, for while Nure had a slight edge, all too often the final ball was poor, when Gareth Agnew, Josh McIlroy and Bobby Crowe were all in favourable positions.

The only thing Nure could muster up was a McIlroy shot, high over the bar.

Corner, meanwhile, rode that early storm and twice had the ball in the net, but Reece Gilmour’s celebrations were cut short by somewhat debatable offside whistles.

Gilmour once more ran through only for Old Boys keeper Dean Adams to handle outside the box.

The referee probably got this one spot on, by preferring yellow to red.

It was a fitter looking Corner who forced the pace on the turnaround, taking a deserved lead, with Robinson whipping the ball over for Ross Clarke to give keeper Adams no chance.

The Antrim side doubled their lead when Johnny Robinson and Adams got themselves into a tangle, just after the keeper had done well to paw out Scott Cummings’ initial effort; Gilmour pouncing onto the loose ball.

Corner fluffed another opportunity when, for once, they went ‘route one’; Kyle Robinson missing the target after fastening onto keeper Ewan McGrath’s long punt.

Nure did their best to respond, with Agnew going close and substitute Ryan Stewart seeing a header blocked on the line.

However, the game was beyond them once Michael Duff upended Joel Haggan inside the box; Haggan doing the needful himself from the spot.

Cummings had another offering just before the close, forcing a fine save from Adams, while McGrath was also in action in depriving Agnew.

Next Saturday, it’s back to Allen Park for the visit of Dunloy.