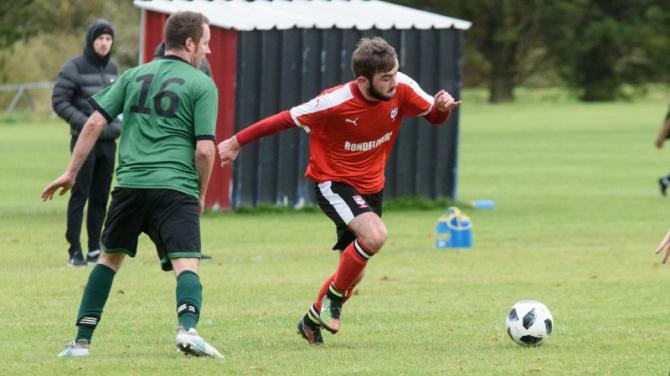 FC Antrim took the derby honours, with a five-goal victory over neighbours Moylena at Allen Park.

It was Moylena, however, who had the opening opportunity on 10 minutes; the home keeper Ihan Westerhuis reacting well, after Conor Johnston had got his head to a Cameron Moag corner.

Instead, it was Antrim who showed the way five minutes later; Kevin Coogan threading the ball through for Shane Donnelly to beat the offside trap.

On 25 minutes, it was two – the ball falling to the unforgiving feet of Colin McKeever from a corner.

Just before the break, Moylena almost pulled one back, but Westerhuis once more excelled himself, this time keeping out James Morgan’s long range effort.

The tie, though, was as good as over once Antrim notched a third around the hour mark; a deft dummy from recent recruit from Moyola Park, Oran McAuley opening the door for cousin Conor to slip the ball beyond the helpless keeper.

Oran turned executioner three minutes later, after getting on to the end of a Miles Devine corner.

*This Saturday, FC Antrim travel to Carnlough, while for FC Moylena, it’s another derby, against Newpark Olympic at the Forum.