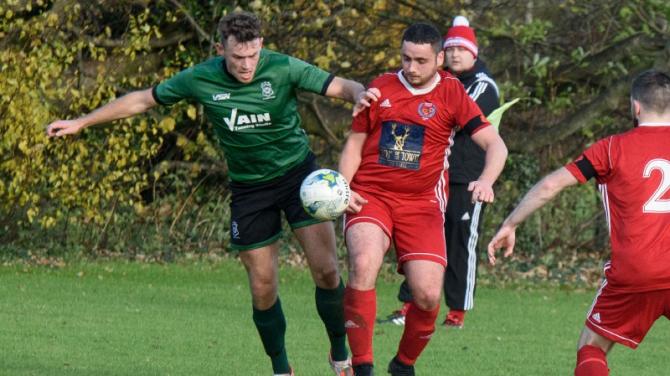 THIS Antrim ‘derby’ was still in the melting-pot going into injury time when Jonny Hunter struck the winner for Newpark to break Moylena’s hearts and keep Olympic on top of Division Two.

The league leaders started brightly against a Moylena team set up to play on the break and they came close in the opening stages with Henry and Jamie Nutter both going close before Craig Larkin spurned the best chance of the opening stages.

Moylena looked happy to let Newpark have the bulk of possession, but on the break, the pace of Craig Moag and Caolan McKeown was a constant threat to the Newpark defence.

The opening goal came nine minutes before the break from the penalty spot.

Jamie Nutter fired high into the top corner of the net after Ross Brown had been fouled.

Moylena raced out of the traps in the second half and got themselves level after only three minutes.

A long ball forward caused a mix-up between three Newpark defenders whose hesitation let in Adam Murdock and he made no mistake slotting home the equaliser.

Newpark went back on the offensive after this set-back but were finding Moylena difficult to break down and it was actually the homeside who looked more likely to score with Newpark making several last-ditch tackles to prevent Moylena taking the lead on the counter-attack.

There was to be drama in injury time though as Newpark snatched victory on 93 minutes.

Dee Killen clipped a free-kick deep into the Moylena box which they failed to deal with and the ball fell to Hunter who, from an acute angle, smashed it into the roof of the net.

There was still time for Moylena to have another chance though and Newpark had Stuart Burrows to thank for making a goal line clearance to ensure his side claimed all three points.