Chimney Corner crash out of Cup 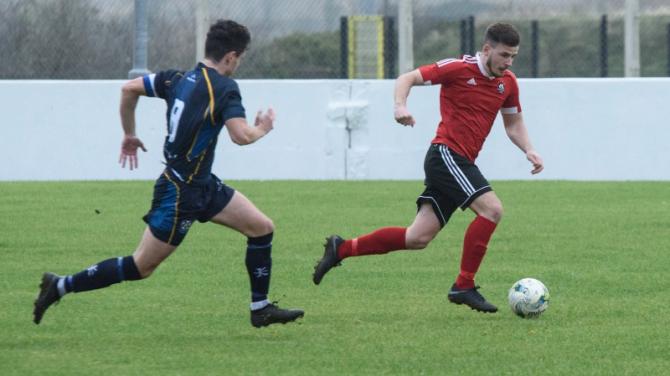 CHIMNEY Corner squandered what should have been a crucial two-goal lead, to tumble out of the Intermediate Cup at the hands of Ballymena Provincial League stablemates, Cookstown Youth.

As expected, there wasn’t much between the sides, with Cookstown Youth having an identical record to Corner in the league this term, even the same number of goals scored and conceded!

Corner had an early offering when Cookstown were caught out trying to play the ball out from the back, but Reece Gilmour went it alone when he may have been better slipping the ball over to Scott Cummings.

Gilmour did engineer an opening for Ross Clarke soon afterwards, but the midfielder swerved the ball wide of the target.

Corner squandered another opportunity when Kyle Robinson nodded a Cummings cross past the post.

Granted, the bumpy surface was hardly helping Chimney’s passing game, but had they taken their chances in the opening five minutes, they surely would have had one foot in the next round of the cup.

After that, the game largely evened out, with Corner all too often sloppy in possession.

Yet they did make the breakthrough just before half time; Clarke and Gilmour releasing Robinson whose deep right wing cross was finished off from close range by Joel Haggan.

Chimney hadn’t been at their best, but were good enough value for that slender one goal interval advantage.

The Antrim side tightened their grip on 57 minutes; Robinson teeing up Gilmour’s cross for Clarke to dispatch into the bottom corner of the net.

Corner, too, could have been out of sight had Robinson made better use of Cummings’ back post cross.

The impressive Johnny Coulter, too, ran practically half the length of the pitch but Gilmour couldn’t make contact with the teasing cross.

Instead, it was Cookstown who were back in the tie, after Jack Chalmers tried to shield the ball away, instead of just hoofing it out for a corner.

A visiting forward whipped it off his toe, slipping it to Steven Arrell to give keeper Niall Murphy no chance.

That goal offered Cookstown fresh belief and minutes later they were back on terms; Corner once more guilty of failing to clear their defensive lines, with Arrell again the beneficiary.

Cookstown now had the bit between their teeth and they secured their place in the next round, inching ahead for the first time when Ryan O’Neill fired in from the edge of the box.

As Corner boss Kingsley Burrows sighed afterwards: “I encourage the players to get the ball down and play football, but not on their own goal line.

“Sometimes you just need to hoof it into Row Z.

“We’re giving away goals every week, and we’ll have to deal with it.

“It’s just down to individual mistakes.”

Next Saturday, Corner have no fixture.