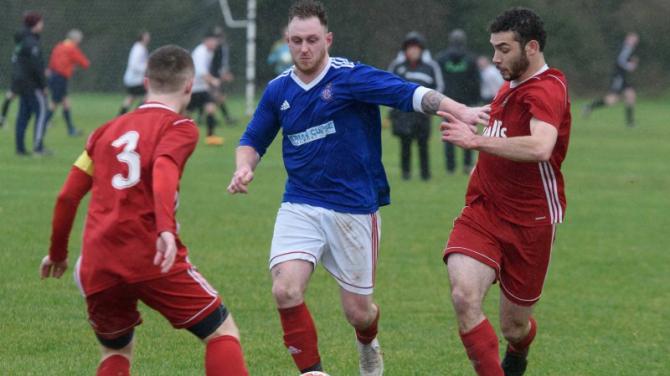 A WELL-organised Carniny side took all three points in this game at the Forum with the Ballymena men scoring three first half goals that were enough to see them take the points.

Carniny opened the scoring on 16 minutes after Chris Wilgaus crossed into the Abbeyview box with Matthew McComb on hand to fire home from close range.

Eight minutes later Carniny were awarded a free kick just outside the Abbeyview box and McComb stepped up to curl a super strike up into the top left corner and make it two nil for the visitors.

This forced Abbeyview into life as they tried to get back on even par.

They forced a few corners which were dealt with by the Carniny back four and broke through on a few occasions with Niall Shannon reacting well to deny the Abbeyview forwards and they had to watch a few shots going wide of the Carniny goal.

Carniny still looked dangerous on the break with Aaron Johnston on the right flank causing problems and Keith Miskella proving a handful, leading the line for Carniny.

Ten minutes from the break good work from Aaron Johnston saw him cut in from the right flank and cross low and hard into the box forcing an own goal.

Minutes later Miskella found himself through on goal but Darren Harbison in the Abbeyview goal came out well and did enough to make him force his shot wide.

The second half was a fairly even affair with both teams cancelling each other out.

Abbeyview started to take the game to Carniny half way through the half and put the visitors under pressure from a number of corners which were dealt with by the visitors defence.

An Abbeyview free kick saw Alan Cochrane land the ball on the crossbar but it bounced away to safety.

The Antrim men also had a few long range shots but none managed to find the target.

Into the last 15 minutes and Carniny forced a few corners themselves as they began to attack more, but there were to be no more  goals in the game with the Ballymena men taking a 3-0 win at the final whistle.