Former teacher's love affair with Antrim is still going strong, after all these years 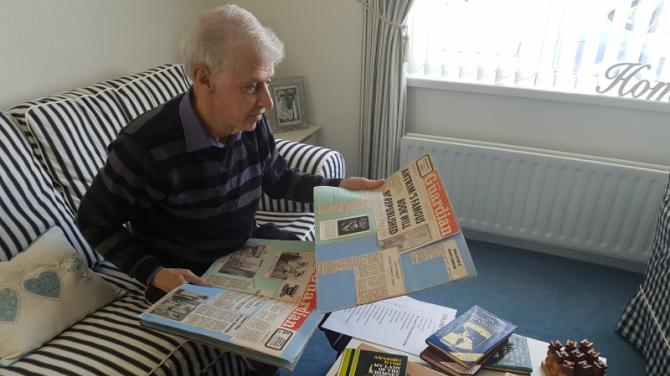 ON June 7, at 10am, I travel up the Moylena Road to meet Alastair Smyth, well known in Antrim as a teacher, writer and local historian.

I have barely sat down, before he tells me that exactly 220 years ago, on June 7, 1798, thousands of insurgent rebels were preparing to march down Moylena Road, aiming to capture Antrim.

As we know now, they were ultimately unsuccessful.

Such is the encyclopedic knowledge of a man who will surely join the likes of Alexander Irvine and Maurice Leitch in the pantheon of local literary legends.

Alastair has strong links to both men.

Mr Smyth had been writing a series of historical articles for the Antrim Guardian for some time and the council at the time asked him to pull them together to write ‘The Story of Antrim’.

Every council in the UK was supposed to have a book written to mark the occasion.

Some did, some didn’t, but it is hard to imagine that any other town or city in these islands could have received such a dedicated immortalisation as ‘The Story of Antrim’.

Alastair is also author of ‘Antrim, Town and Country’, which he describes as ‘a coffee table book’.

His endeavours to immortalise the history of the town have led to meetings and TV appearances alongside the likes of Brian Keenan, one of the Beirut hostages, and Harry Secombe, the former Goon Show star and singer who went on to present the popular Sunday series ‘Highway’.

“I lived on the Toome Road [in Ballymena] and I knew nothing about Antrim,” he said.

“I went out one day on my bicycle, this would have been the late 1950s, and I discovered the castle grounds, there was no publicity back in those days, I just went in.

“The castle was still there, and in the long ponds, there were these amazing gigantic ornamental goldfish, some of them two foot in length, huge lilypads and everywhere amazing flowers.

“One day I was sitting in a summer seat and this old fellow sat down and we started chatting.

“I discovered that he was the retired head gardener and he told me a lot of stories.

“He began working there in 1909 and he said that one day, he was tending the verges and Lord Massereene galloped up on his horse with a sapling in his hand, as he would do very often.

“He said ‘plant that there’ and pointed to a spot.

“The gardener said it would be too close to the other trees and when they were mature, they would get in each other’s way, but Lord Massereene always got his way and it was planted.

“When the gardens were being refurbished, a lot of the trees had to be thinned out, because they were too close together, and I know why, because of speaking to that gardener!”

Alastair also recounts the tale of how Lord Rostrevor gave Lord Massereene a Mexican Pine sapling, which to this day drops huge pine cones, often collected and used as ornaments by locals ‘in the know, each October.

Back in those days, Hall’s Hotel and the Lough Neagh Hotel were still in operation, and a favourite chippy was the Bluebird Cafe.

Mr Smyth also recalls the first time he set his sights on the Round Tower, and how it led to a ‘lightbulb moment’ in the classroom.

His interest in history, heritage and literature meant that he would go on to become an inspiring teacher - and an advocate for one of Antrim’s best-loved authors.

“I remember finding the Round Tower, you have to remember that there were no houses around the area back then, it was all fields, very rural.

“The industrial revolution came to the Six Mile Water Valley in the form of the flax and paper industries, to be replaced by the likes of Enkalon and the workers needed to live somewhere.

“Many years later, I was a teacher at Antrim Grammar. In the mid 70s, before the building was complete, I was teaching four forms in four different schools around Antrim!

“On one occasion I was trying to teach descriptive writing.

“I was looking out the window and I could see the Round Tower.

“I recalled that Alexander Irvine had written about how he and his mother had taken a walk out to the Round Tower one day in his famous book ‘My Lady of the Chimney Corner’ and the writing was so evocative.

“I thought I should track down the book and that it would help to teach the class, I could read it out to them.

“I contacted the library and they said that it had gone out of print in the late 1930s and there was a waiting list of over 100 people wanting to read it.”

The book was first published in 1913. In 1935, it remained in third place in a top 20 list of Collins’ best sellers, beaten only by Lorna Doone, David Copperfield and Pickwick Papers and beating titles like Treasure Island, Jane Eyre, Alice In Wonderland, The Man in the Iron Mask and Pride and Prejudice.

So keen was Alastair to make sure that his pupils could enjoy Irvine as he had, he began to make contact with the writer’s family members in America and struck up a correspondence.

After a series of legal rulings, Mr Smyth and his supporters were able to have My Lady of the Chimney Corner republished - but it did not stop there.

“There was a lot of detective work and legal situations to tackle.

“Through Appletree Press we were able to get the book republished and yet again it entered the top ten best sellers in 1980,” he said.

“It was only Prince Charles, who had brought out ‘The Old Man of Loughnagar’ and a very popular book about the history of Ireland that sold more.

“We were also able to get it republished in Great Britain and we managed to republish the sequel ‘The Souls of Poor Folk’ and a third book, called ‘Anna’s Wishing Chair’, which was re-printed as ‘The Chimney Corner Revisited’.

But former teacher Mr Smyth’s fascination with Irvine does not end there and he is now looking for a publisher for his autobiography of the writer - which contains an added twist.

“For all these years, people have read My Lady of the Chimney Corner as a son’s tribute to his mother, from a very sincere, loving perspective.

“My research has indicated that the way the book has been read was not the way Irvine intended it to be read.

“All the details will be in my biography, how the book should be understood, and hopefully it will give it a new lease of life.”

Renewed interest in Antrim authors inspires Mr Smyth and he is delighted that a younger generation is reading the works of local writers with fresh eyes.

“Maurice Leitch (the award-winning writer of Silver’s City and Poor Lazarus) was a teacher at Antrim Primary School,” he said.

“And he employed the help of my father, who was an expert typist.

“One night I heard him clattering away on the typewriter, very busy, and I asked what he was doing so late at night, and he said it was a book by Maurice Leitch, and I said that I knew him.

“It is fantastic that his books are also being re-printed.”

One of Alastair’s other passions is research into local families, particularly if he can help people overseas searching for long-lost Antrim relatives.

He has done extensive research on the Shannon family, who emigrated to New Zealand.

Another family from Antrim who survived despite the odds was the Redfords.

In 1823, Joseph Redford, an Exeter Bleacher, was invited to Ballycraigy House for a game of cards.

Its owner William Chaine planted a professional card player in the game and the result was that Chaine won an empire consisting of bleach works and greens, beetling mills, workers’ homes, farms at Moylinny and Spring Farm - forcing Redford to flee the country penniless.

Ironically Alexander Irvine was at one time a stable lad at Ballycraigy.

But as Mr Smyth points out, the Redfords had the last laugh, going on to become one of Canada’s most successful industrial families, while Ballycraigy House and the mill buildings around Muckamore have crumbled to dust.

“There are a lot of old families from Antrim who have gone off to make their way in the world,” he said.

“The Shannons could trace their family back eight generations.

“It is great to help people reconnect with history and I will help anyone who asks.”

With the castle grounds having sparked his love of Antrim, Mr Smith is full of praise for the local council’s refurbishment of both the grounds and Clotworthy House.

But, like any historian, he has an interesting fact or two up his sleeve.

“If you look at the motto over the gate at the riverside entrance, it should say 'PER ANGUSTA AD AUGUSTA’, which means ‘through adversity to honour’.

“However it was miss-spelled and it actually says ‘through adversity to adversity - which is also quite apt!”

Another historic typo can be found at Market Square on the side of the Old Courthouse.

“The stonemason left the letter ‘i’ out of the word ‘built’,” Alastair explained.

“We always used to joke that he must have been spelling it as it is pronounced around here - ‘bult’!

“But then he has gone back and stuck the ‘i’ over the word. It remains to this day, so I would encourage local people to see if they can spot it!”