Almost 60 years on, Betty and Billy are still madly in love! 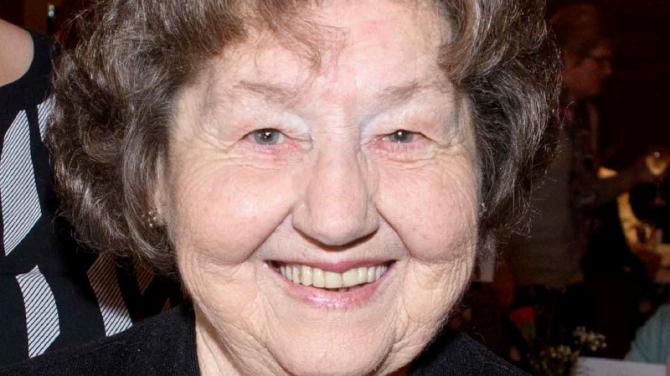 AT almost 80 years of age, Betty Campbell is synonymous in the Antrim area for charity fundraising - and she has no intention of stopping any time soon!

Whether rattling a collection tin or organising her hugely popular Ladies’ Lunch at the Templeton Hotel, Betty has raised hundreds of thousands of pounds for the likes of Macmillan and Riverside School over many decades.

Betty was born in Scotland, near Glasgow, her mother a pastry chef in one of the ‘big houses’, but was sent to Antrim to live with her grandparents at 33 Fountain Street.

“The Hargroves ran the shop with the petrol pumps and they had a telephone.

“A call came though that I had been born, so my granny and granda said ‘send her here’.

“We had no money, we had very little, but I think people were happier back then,” said Betty.

“I do recall the war gun being at the ‘top of the town’.

“People say it wasn’t there but I can remember playing on it.

“If there hadn’t been the gun to play on, all there would have been was our skipping ropes!

“I went to Sunday school, and ended up teaching Sunday school and singing in the choir at the Church of Ireland and I had a summer job at the Antrim factory in Riverside, where they spun the linen.”

A medical blunder meant that Betty’s granny could no longer walk, and the young girl took to carrying her grandmother up the stairs with her arms around the older woman’s waist.

“I used to tell my own grandchildren that and they couldn’t believe it.

“You wouldn’t be able to do it now, there’s too much health and safety!

“A few years later we were told that one of the houses between Swann’s shop and Hargroves’ petrol pumps had become free and there was a room off the kitchen, so we moved there instead.

“My granda always said to me, ‘live your life the best you can and treat others as you wish to be treated’.

Schooldays were spent at Bruce’s School, a short walk away.

Benevolent even as a youngster, Betty remembers leaving her exercise book in strategic spots to help her classmates.

“I was never good at spelling but I enjoyed arithmetic.

“But I got caught on eventually, as if I had a sum wrong, the whole class got it wrong!

“The Master called me in and asked why I had left my book down on another boy’s desk, I told him that it must have fallen out of my schoolbag.

“My favourite teacher was Sadie Laverty.

“There is a church where the school used to be. Part of it is underground, out the back, where we had the Fourth Class.

Antrim was a different place back then, with places like Donaldson’s, Wright’s Shop and John Lawlor’s - ‘where you bought your knickers and socks!’

Betty was doted on by her Antrim relatives and her Uncle Davy would often give her ninepence to go to the picture house.

“One day I was there to see a cowboy film,” she said.

“I don’t remember which one it was, it was just something to do to get us out of the house.

“There was Billy Campbell from Ballyrobin in the back row with his friend Geordie Brown, so I said to my buddies, let’s go and sit there beside those two!”

Betty and Billy courted from when she was barely 15.

He rode a motorbike, and at first she was worried about what her grandparents would think.

“Once they met him and found out that he didn’t smoke, they were happy enough with that and never said another word about it!” she laughed.

Although, being the apple of her family’s eye did not come without some embarrassment.

“Billy called for me one day,” said Betty.

“Everyone in the family used to call me ‘the wean’.

“My Auntie Queenie had taken me out to Belfast for the day and we had gone to see a pantomime.

“So the boy I am courting comes to the door on his motorbike and is told ‘the wean is away to the pantomime’.

“He thought they were joking. He still keeps me going about it.

“When I got home and heard, my granny and granda said ‘well, you are the wean, aren’t you?’”

Billy suggested a wedding in a registry office - but Betty had other ideas.

“I wanted a white wedding, I had my heart set on it.

“I wanted it done my way.

“Billy wasn’t a church-goer but I said if he was going to marry me we would get married in the church.

“By that time, I was working in Gallahers and did all the overtime I could get.

“I had my white wedding, there were 89 guests, the choir sang, I had a cake, we had the do in Hall’s Hotel and ten days in the Isle of Man for a honeymoon.

“My bridesmaid was Madeleine Fleming.

“I was determined to do everything properly and it was all paid off before the day.

“Billy still wouldn’t be a regular church-goer, but I don’t let him forget about it.”

The couple, who have two children and four grandchildren, will be married 60 years next year.

After the deaths of her beloved grandparents, the Kennedys, who died within six months of one another, Betty lived with various relatives and digs on Castle Street, Dublin Road and with Billy, who worked as a labourer at Aldergrove, on Seven Mile Straight.

One day he took her on a spin on the bike to Paradise Walk between Antrim and Templepatrick.

“There was this old house, there was no roof and no windows.

“I said, nobody could live in that! He went off to speak to the man that owned it, across the fields, and said he could get it into shape.

“I never thought anyone could make it into a home, I thought his head was cut.

“A few months later he brought me out again on the bike, and he and a few of his mates from work and his brother had totally transformed it.

“And we have been here ever since.

“I used to keep it like a palace but over the years, we have collected so much stuff!

“I think when you come from a background, like I did, we had nothing, so I don’t like to throw anything out!

“My grand-daughter sometimes takes me out to Ballymena and buys me chips - that was something I could never have done for my own grandparents.”

It is one of Betty’s big regrets that her grandparents did not live to see her collect her MBE for charitable works from the Queen at Buckingham Palace around eight years ago.

Ever the trouper, she had not long been released from hospital following a gruelling heart bypass.

“She was such a lovely lady and she knew all about me,” Betty said.

“She was asking all about my operation and making sure I felt okay.

“It was a very proud moment for me and I am sure my granny and granda would have been delighted.”

Asked how she started out in her charitable endeavours, Betty replied: “Someone heard me speaking at the church one day and asked me to come out to speak to their group.

“It just all went from there. I think that the reason I am so good at raising money is because I am big in the mouth!

“I just figured that I was very lucky to have a good life and that I should use my time to help others.

“I am very fortunate that my family has not been affected by cancer, a few years ago, you were told you had cancer and that was it, you were told how many years you had left.

“Now there are so many more things they can do for you.

“I had a part-time job in Stewart’s and I asked the boss if I could stand outside with a collection box.

“I was always seeing what I could do to help. Back then, everyone knew everyone else, or if you didn’t, you could just start chatting to them, I could always wangle a couple of pounds out of people.

“Things seem different these days, I don’t know if the young ones can be bothered with things like that any more.

“I always thought, we had enough. I have no debts, we don’t owe anyone anything, we could afford a holiday every year. Why do we need anything else?

“The Isle of Man was always a favourite destination. Billy said it was nothing to do with the motorcycle racing!

“When I was at home with my granny and granda, Thursday was the day the rent man came and that was the most important day of the week.

“When I remember the way we used to live, it was hard but I think we were more carefree.

“I was on my own after my grandparents died and I earned all my own money and took all the overtime I could to pay for my white wedding.

“I suppose I just always knew that there was always someone less fortunate than myself.

“I never drank or smoked.

“I thought I was living well if I was fed and got to the pictures three times a week and got to a dance at the Protestant Hall!”