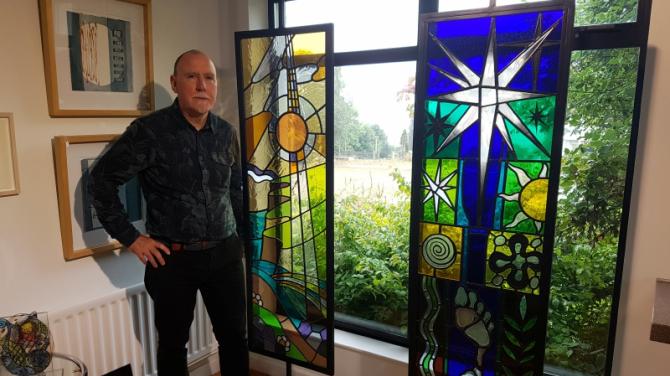 AT the height of the Troubles, David Esler was working on the Springfield Road in Belfast.

During this time, the Ballyclare man, who for many years has run his own studio in the historic Antrim townland of Donegore, worked alongside people of all faiths and creeds.

A creator at heart, his days were often spent painstakingly piecing back together church windows - and those of hotels and pubs - which had been shattered by bombs, bullets or bricks.

Therefore he found it more than fitting when he was chosen to make a window for the Office of the First Minister and Deputy First Minister, to be installed at the main stairwell of Stormont Castle.

As with much of his work, the window was influenced by a poem - 'Man, Fish and Bird' by John Hewitt.

“It is one that really sticks out,” said David.

“I was given a completely blank canvas.

“I had observed the death and destruction of the 70s and 80s and had worked in a very diverse environment in a location which was always at the centre of things; the Springfield Road seemed to be where everything was happening.

“I observed a huge change with the advent of the peace process and I am proud that I was able to play my part and contribute something to that process.”

The child in the window celebrates new life, while the fish jumps towards the sky, bringing hope and joy, with the red bird representing ‘the heart of the people’.

The Holestone in Doagh also makes an appearance.

David confesses that one of the most interesting moments of his career was standing as an anonymous spectator and listening to visitors’ interpretations of his work during an open day.

“A lot of people wonder what the empty chair is about!” he grinned.

As he reflects on 50 years in the industry, David, who is also a poet and a musician, wants the next part of his creative process to include more work on conflict resolution and using art as therapy.

“I’d love to do more work with communities, more workshops and more therapeutic work,” he said.

“50 years is a big landmark for me and I don’t want to retire - I want the art and the creation to evolve.”

The window, which had been in Lisburn and Castlereagh City Council headquarters for 18 years, was moved to new council offices at Lagan Valley Island earlier this year.

Through his work with the Institute of Conflict Studies, David has run a number of workshops in which those bereaved or impacted by the Troubles were brought together to work on a piece of stained glass.

The Sendler window was created for the UK commemorative ceremony for Holocaust Memorial Day 2016 and has been exhibited all over the UK and Ireland.

Former members of the British forces, along with ex- police officers and nurses created a tribute to Irena Sendlerowa who rescued 2,000 children from the Warsaw Ghetto.

The Dalaradia window was created by men who were formerly connected to a loyalist paramilitary group.

Over several weeks they looked at the poetry and local history they were connected to and invited Irish President Michael D Higgins to view the window on its completion, welcoming him in Irish.

He then travelled a short distance up Donegore Hill to David’s studio, where he was shown the Dalaradia window.

“Meeting the President of Ireland was fantastic,” David said.

“He is a poet himself and like myself has a real passion for poetry.

“It was great to have him in the studio and to speak about our shared love of art.”

David’s work has brought him into contact with the likes of Prince Andrew and Laurence Llewelyn-Bowen, as well as the families of those killed in the Troubles.

“I met the La Mon families when I first created the window and when it was re-dedicated, I met them again, and we had all changed in that time. We were going through a process,” he said.

David Esler’s work can be found all around, from private homes to public buildings.

At Antrim Civic Centre, look up and see the Round Tower through a dome of light.

At Antrim Area Hospital and the adjoining Macmillan Cancer Care Centre, the healing powers of art are again present, as David’s work continues to offer comfort and calm during turbulent times for many families.

Other works of which he is very proud include large windows at St Mary’s Parish Church in Comber and Belleek Parish Church, which takes the theme of ‘The Potter’s Wheel’ based on the text from Jeremiah 18:6 - ‘like clay in the hand of the potter, so are you in my hand’ - all inverwoven with the famous Belleek pottery pattern.

At Ballyclare High School, David confesses he was ‘all about the art’ - obsessed with colours, light and the works of the impressionists.

“I was very interested in the works of Chagall and Matisse - sometimes the sky isn’t necessarily blue and the grass isn’t green - it’s all about how the light hits something.”

It was his first introduction to a stained glass studio by a friend, Reverend Harold Allen, which inspired David to get involved in the medium.

He underwent an apprenticeship at 16 and was enrolled at the art college in Belfast, where he studied fine art.

“A lot of what I was doing was fixing and repairing things that other people had made and that had been damaged - but I am a creator at heart.

“This was at a time when a lot of small studios were being taken over by big companies and I wanted to have more free rein over what I was doing.”

David happened upon his current location by happy accident - he had been aware of the building, but it wasn’t until a band parade in Templepatrick forced a road closure that he decided to venture up Donegore Hill to view the space.

The first step of the process is when the client tells their story.

“People do get emotional,” he said.

“And that’s okay. I want people to be able to come here and express themselves and I help them find a way to put their words, thoughts and feelings into a piece.”

David then makes a 1:10 scale drawing, which he develops into a sketch or watercolour before making a full size ‘cartoon’.

The glass is then laid over the cartoon and cut, coloured, fired and assembled.

Even small decorative pieces can take weeks to make.

David said that his own Christian faith had certainly inspired his work.

“When it comes to work in Churches, it definitely makes it easier,” he said.

“Bible stories have definitely inspired me and I love to be able to tell the stories of the scriptures through the glass.

“I do feel that my faith and spirituality helps me create work with a deeper meaning.

“As a poet and a musician, I include those inspirations in my work as well.”

A piece for the Cancer Centre at Belfast City Hospital is based on Miroslav Holub’s The Door, while ‘A Beautiful Dream’ at the Macmillan unit in Antrim was inspired by the poem ‘A Kite for Aibhin’ by Seamus Heaney.

The kite is a metaphor for life, with the string a lifeline, connecting the living and the dead.

Local landmarks such as the Round Tower, Six Mile Water and Lough Neagh also feature.

David’s work has travelled widely - to Antrim and Newtownabbey’s ‘sister cities’ in Arizona, Poland and Germany, and to Pennsylvania.

He was commissioned to commemorate the opening of the North American headquarters of one of Northern Ireland’s most successful companies, the Almac Group in 2011, and memorialise its late founder, Sir Allen McClay.

The artist combined scientific references and symbols associated with Northern Ireland, with Sir Allen’s favourite sayings from his aunt, who encouraged him to go into business.

The window even features the farmer who sold Sir Allen the land on which to build the factory, cutting the first sod with his antique plough.

Stained glass has been a family affair for the Eslers, with his wife and two daughters both working in the family firm at its height - thanks to the wonders of modern technology, one daughter still does David’s accounting from her home in the USA!

And does David have any work in his own house?

“I live in a 1930s house so I have something appropriate to the style,” he said.

“I wouldn’t want to have anything that didn’t suit the house.

“One day I may have something huge, colourful and abstract, but I’ll have to wait until I get a house that is more suitable for that!”