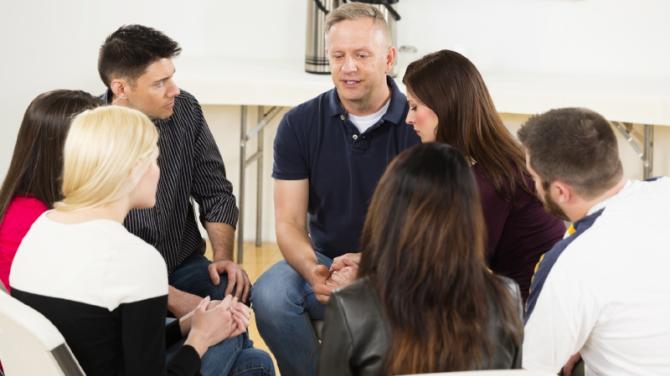 AS we approach ‘Sober October’, Alcoholics Anonymous in Antrim is looking forward to an important anniversary.

The Antrim Greystone Group is 25 years old and is celebrating with an Open Public Information Meeting next Monday (September 17) at 8pm in the Old Courthouse in Market Square,

The panel will include speakers from AA, the Al-Anon Family Group and Dr Gregg, a senior consultant in addiction and psychiatry at Holywell Hospital.

Professional workers and any members of the public interested in the problems of the alcoholic are also welcome to attend.

The organisation, founded in 1935 in the USA, has been present in Northern Ireland for 70 years and was set up in Antrim in the early 1960s.

The first meetings were held in Wilderness Lodge, a ramshackle old building close to St Comgall’s Church, before they moved, ironically, to a room above Sloane’s pub in High Street.

There was another move to Clotworthy and then to a room at St Comgall’s community centre.

The Greystone group was established in 1993 in the community centre on the Ballycraigy Road.

“It’s for people who need it, not people who want it,” a veteran volunteer told the Antrim Guardian this week.

“It started off with four people two nights a week and there is still a demand for it.”

Other groups meet in Templepatrick, Crumlin and Randalstown.

“It takes an alcoholic to understand another alcoholic. Families and the medical profession can try their best, but the best support can come from people who truly understand what you are going through and have been where you are now.”

According to Alcoholics Anonymous, people turning up for their first meeting  are not sleeping on park benches, are not homeless, are usually employed.

Outwardly they appear to have normal lives.

Many of them appear to be very successful with good jobs and a family and a mortgage.

They get up, they go to work, they come home and they drink.

Sometimes they drink at work, at lunchtimes perhaps, or maybe they have begun to hide their drinking from their colleagues and their families.

They may have become aware themselves that it might be a problem.   But mostly they don't think it's a problem at all.

They dismiss criticism of their behaviour, they may not be  truthful about their levels of alcohol consumption.

A lot of them feel unwell a lot of the time, a constant low hum of a hangover that gets louder now and again when they have really hit the bottle.

They don't know what will happen when they pick up a drink.

For some, it has already passed way beyond any form of control.

AA meetings are free and available to anyone who has a desire to stop drinking.

Their meetings are everywhere, in every city and nearly every town across the UK and Ireland, every night of the week.

Daytime meetings are available too, meetings stay open on Bank Holidays and at Christmas and New Year.

Far from the pre-conceived idea of a problem drinker these AA meetings include men and women of all backgrounds for whom the nightly drink became a nightmare.

Using a 12-step programme and the support of others who have stayed sober, they help the drinker stop and stay stopped.

Then they offer help and support to live a happy and contented life free from a dependence on alcohol.

“We have people of all ages, from all walks of life,” said the volunteer.

“For myself, it was just a way of life.

“I held down a job, outwardly things were normal - what was wrong with going to the pub after work for a few pints?”

“But my relationships were starting to suffer and I had no money.

“People have this idea in their head about how the meetings will be like, based on what they have maybe seen on the TV or a film.

“People will listen without judgement.

“You can share your experiences and talk to people who understand what you are going through.

“But it has to be you that wants to take the first step.”

The AA attributes its success to the fact that an alcoholic who no longer drinks has the added ability to help an uncontrolled drinker.

The recovered alcoholic passes along the story of his or her own problem drinking, describes the sobriety he or she has found in AA, and invites the newcomer to join the informal Fellowship.

AA members will usually emphasise to newcomers that only problem drinkers themselves, individually, can determine whether or not they are in fact alcoholics.

“People can be daunted about stepping through the door for the first time,” said the volunteer.

“Especially in this modern world, people worry about being recognised or how it might impact on their family life or their jobs.

“But there are so many meetings all over Northern Ireland, you don’t have to go to the one in your home town and even if you do, people will understand what you are going through.

“In some cases a suitably qualified volunteer can call to your home if you feel you need extra assistance and the Al- Anon group is a sister organisation that supports the families of alcoholics.

“We invite the people of Antrim along to our information event next week, all are welcome.”

There is also help by email at csoofaa@btinternet.com (Monday to Friday) and more information on meetings can be found at www.alcoholicsanonymous.ie