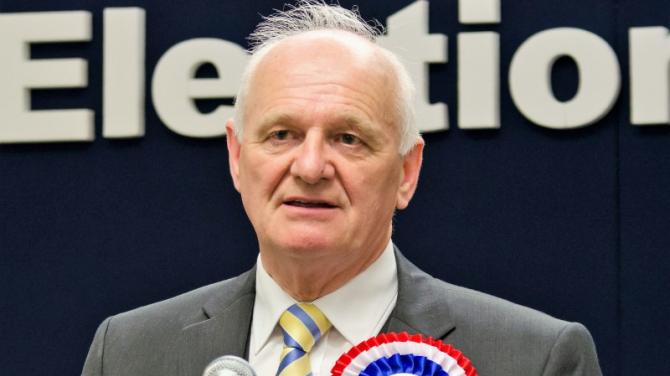 FORMER South Antrim MP William McCrea has revealed that it was ‘God’s will’ that he retire from his ministry after almost half a century in the pulpit.

The fiery Free Presbyterian preacher will give his final service as minister at Calvary Church on October 14.

Rev McCrea’s ministry first brought him to Magherafelt in 1968 but soon he was feeling the call to politics too - winning seats in Mid-Ulster before making the leap to South Antrim where he faced his last stand in 2015 after a decade as MP.

A colourful and often controversial character, he also had a third string to his bow - recording dozens of gospel albums that won him a legion of fans at home and abroad.

He turned 70 at the beginning of August, however, and it seems that he has taken the decision to lighten the load - just months after he was gifted a seat in the Lords.

Speaking this week, the unlikely star from Stewartstown said the decision to go was not taken lightly. Indeed, in many ways he feels he is walking away from a role that had been a ‘labour of love’.

“From the army reject tent, the congregation moved into the little wooden hall, then to the tin tabernacle with its two extensions and then in 1978 into this building,” he recalled.

“Our journey together has had its highs and lows. We have laughed together and we have cried together as all families do, but we have grown stronger together but only God knows how much I have loved this place and its people.

“I have never looked upon my charge here as a burden but have counted these years as a labour of love for my Saviour.

“I have made my mistakes, and for these I am sorry, but I have earnestly sought to preach the word of God faithfully in season and out of season, always remembering the seriousness of the preacher’s calling which is written above the pulpit - ‘Woe is unto me if I preach not the gospel’.”

The former South Antrim MP revealed that he had ‘earnestly sought the face of the Lord for guidance’ when considering his next step.

“God’s will is not necessarily easy but it is always best,” he said.

“It is vital that when God reveals His will to us that we do it, no matter how hard or hurtful it may personally be to us.

“I have therefore decided that the time has come for me to retire as minister of Calvary Free Presbyterian Church.

“This has been a heart-breaking decision for me as most of my life’s work has been centred around the congregation and people of Magherafelt, but I genuinely believe this is the right decision in the interest of the furtherance of the Lord’s work in this area.”

While it will undoubtedly be an emotional wrench for Mr McCrea, it will be a financial blow too.

Back in 2015 he was listed third in a league table of MPs who spent ‘a significant amount of time doing other jobs’.

He told the Commons that he did 30 hours per week at Calvary - over and above his full-time job to his other flock in South Antrim.

On top of that he was picking up his Westminster wage which at that time stood at £67,000.

Then there were expenses, though back in 2009 he was one of 10 Northern Ireland MPs who were asked to pay some back after claims were scrutinised.

His bill was the highest of the Ulster reps, weighing in at a hefty £5,329. The bulk of that, it later emerged, involved the purchase of ‘an item of furniture’.

Tributes have been paid to Mr McCrea following his announcement - though few believe they have heard the last of him.

Lord McCrea of Magherafelt and Cookstown is not the type to quietly disappear.