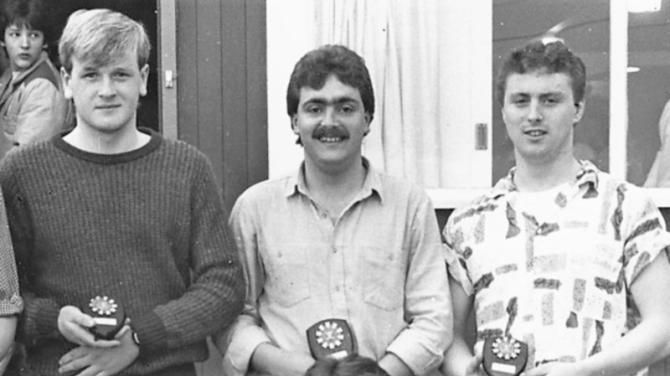 MEMBERS of Antrim Hockey Club have bowed their heads in quiet reflection to remember the tragic day they lost three of their brightest lights in what was the darkest day in their 124-year history.

Three of their teams took to the field on Saturday, but all paused for a minute’s silence in memory of Jimmy Orr, Colin Rainey and Harold Young. The three friends perished in a devastating road accident on the Randalstown Road 32 years ago this week.

All had played in the First team which had come tantalisingly close to winning the old Section One title, the precursor to the Premier League.

After leading the pack well into the New Year, the pressure finally told on the young side and in the end they had to make do with third.

But as the new season got under way the Antrim side regrouped and were determined to prove once and for all that they were a force to be reckoned with.

The tragic events of September 27 would shatter that dream forever.

The team had just arrived at Allen Park after an away game and spirits were high - and it had all the hallmarks of a Saturday to remember when a car pulled up outside to whisk the friends to a surprise birthday party in the Skeffington Bar.

They never arrived. The car was involved in a horrific smash close to the clubhouse - and it was clear from the outset that lives had been lost.

News of the loss of three promising young lives soon reverberated around town. By the time the DJ played his final record at the Deerpark Hotel that night everyone knew what had happened to Jimmy, Colin and Harry so when ‘You’ll Never Walk Alone’ rang out, the room stood in tearful silence.

Antrim did not win the title that year. Instead they were relegated.

Some things can not be put back together once they are broken.