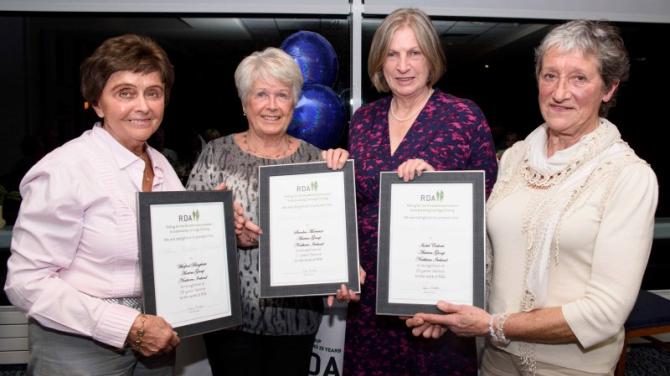 MEMBERS of the Antrim Riding for the Disabled Group celebrated its 25th anniversary with a dinner event at Massereene Golf Club last week.

The group has come a long way over the last quarter of a century but what hasn’t changed are the incredible benefits that it brings to local children.

When the group was established by the then Chair, Marie Morrow, she believed there was a real need in the area.

Gillian Bingham, who is now High Sheriff for County Antrim, was appointed as a physio to offer advice regarding children with physical disabilities and the group began its life in a shed at Greenmount.

Horses were provided by the late Wilson Knipe with help from his groom Miriam Stevenson who the group describe as an ‘incredible support’.

“It was a working shed which was part of the college farm and there was give and take on both sides but we were provided with it free of charge.”

It quickly became clear that the Antrim group, just like groups right across the UK was offering something very special to local children with physical or mental disabilities.

Retired physiotherapist and original member, Sandra Morrison has seen the impact of the group first hand over the last two decades.

And, with more than 600 children having availed of the group’s therapy over the years, she is in no doubt of just what an incredible and important service it is.

“We use horseriding as a therapy for children with a physical or mental disability,” she explained.

“They could be blind or deaf, have behavioural issues or autism, we work with a full range and we have seen just what it brings to them.

“Children with a physical disability could have low muscle tone and poor head control. Some can’t even tolerate wearing the riding hat at the start.

“After a term, we have them sitting up on the horse, managing their balance with the movement and it’s like physio for them but through a different medium.

“The children engage with the animals and it’s in a way which is fun yet educational and they get to socialise.

“They can learn how to vocalise and it really boosts their confidence.

“The changes we have seen in children in a term or a year are unbelievable and we have had parents ring us because they can’t believe it either.”

The group runs every Tuesday during term time with eight children every week.

There are numerous volunteers to each child to ensure their safety and comfort at all times and original member and experienced horsewoman, Winifred Bingham also teaches the youngsters aged from five up to about 15 some basics of horse care.

“We would have four children riding at any one time and there would be volunteer leading and one on either side,” she said.

“We do some games and they can work towards certificates which they seem to enjoy.

“Teachers or parents will always be on site too.”

The group receives referrals from specialist schools, physios or paediatricians and must have a statement to meet the criteria.

While the group works mostly with such referrals, they can sometimes accommodate children from the community.

Around 10 years ago, the group made the move from its original home at Greenmount to Laurel View Equestrian Centre in Templepatrick.

“We’re very lucky to be based there,” Sandra said.

“Linda and Robert Davison, the owners, couldn’t be more accommodating.

“They even pop in with lambs for the children to feed or other animals for them to see while they’re waiting for their turn to ride.

“We are so very grateful for their support.

“We’ve had great support from other people too.

“Local businessman, Terry Robb has supported us for years, keeping a collection bucket in the salon for tips which he donates.

“Down Royal also bequeathed us a collection on May Day which helps too.

“There are so many people who have supported us over the years and we really want to say a heartfelt thank you to them all.”

With the 22 current volunteers keen to celebrate the wonderful efforts over the years, the group held their special anniversary dinner at Massereene Golf Club last week where they welcomed some old faces back.

After the speeches, the original ladies were celebrated for their 25 years of service, with certificates being presented to Sandra, Winifred and Isobel.

They were also given bouquets of flowers and offered a lunch by the general manager of the Dunadry Hotel.

Volunteer, Patricia McKay said: “These ladies had given so many years but we had never had the chance to thank them for that.”

Surprised but delighted with the recognition, the three stalwarts were modest in their thanks.

“There are times I think ‘I’m getting too old for this’ but then you get there on a Tuesday and it’s just so worth it.

“We always need more volunteers though. Without them, this group just couldn’t run.

“You don’t need to have any experience with horses at all - I didn’t!

“We have lots of different people too from nurses to teachers to bank managers.

“There’s a really good feel and that rubs off on the children too.”

With so much achieved over the last 25 years, the only way is up for the Antrim group and plans are already in place for a special event to mark the end of their silver year.

“We’re hoping to hold a fun day at Laurel View in June where we can bring together all the children from Riverside School and Mount St Michael’s who we also work with,” Patricia said.

“The parents will be invited, we’ll have a cowboy supper and there will be carriage riding too.

“It will be a lovely way to mark the end of a very special year.”