Excellence across the board at Parkhall 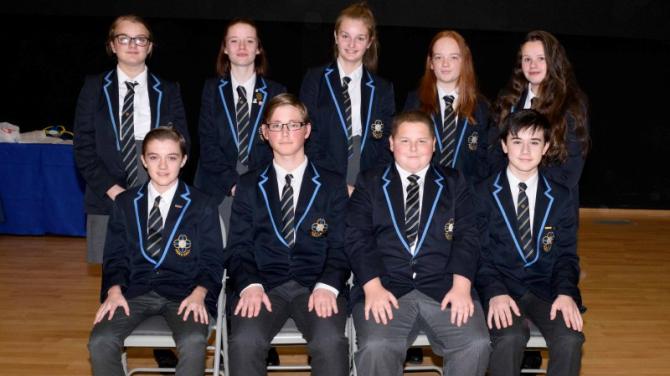 ACADEMIC success and extra-curricular achievements were celebrated as Parkhall Integrated College held its first prize distribution in the salubrious surrounds of its new school building.

With a new campus and new uniform, school pride has never been higher and this was reflected in a stellar list of achievements as the schools welcomed back its first ever group of sixth form pupils.

Before addressing the successes, Principal George Beattie paid tribute to staff, local clergy and neighbouring staff from Nursery and Antrim Grammar School for their help and support in the move.

Despite the upheaval, the students continued their excellent run of results, with 82 pupils gained at least 5 A*-C grades at GCSE level - 79 per cent of the year group which is higher than the Northern Ireland average for non-selective schools.

Mr Beattie noted that maths and English results were steadily improving and recognised the efforts of staff across the board for their dedication.

He also added that the successes build on work which begins in local primary schools and welcomed three principals to the event.

Mr Beattie commended the ongoing Shared Education work with Antrim Grammar and St Benedicts and recognised pupils who had received special awards for leadership, sport, arts and community, as well as academics.

He mentioned some sporting highlights from the last year, including the U13 girls winning the NEBBSA hockey league and the international attainment of Emily Wilson, Zoe Kirkpatrick, Aimee Johnston, Morgan Hanna, Katie Woods, Hannah Adams, and Ross McCausland.

Other highs from the year included the Amazing the Space programme, attendded by Prince Harry and Meghan Markle and the ongoing success of the Rewards Programe.

Choir and orchestra were also praised for their achievements, as were youth club members who obtained qualifications and awards.

The school also enjoyed another extensive programme of travel and trips

Mr Beattie drew attention to the support of the Board of Governors, the Vice Principals, the senior management team and all staff who had embraced the change.

He also commended the work and support of prefects, mentors and School Council reps before wishing them the best for the coming year.

He said: “George Bernard Shaw is quoted as saying ‘progress is impossible without change’ and in embracing this year of significant change we certainly have made progress, particularly in ensuring that our young people can succeed at GCSE level, remain with us throughout seven years of education and can be taught in first class facilities.

“The progress of our young people can often be measured in terms of academic results but also in terms of the other achievements, experiences and opportunities that they receive here at Parkhall that will allow then to make a useful contribution to society.

“It is always about striving to improve – Walt Disney said that ‘times and conditions change so rapidly that we must keep our aim constantly fixed on the future’ and that of course is true but tonight is one of those rare opportunities when we want to just stop, reflect, acknowledge and congratulate each and every one of our young people on everything that they have achieved this year.”