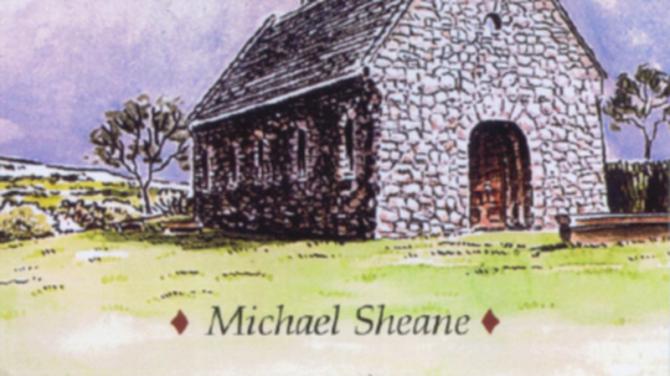 AT 71 years old, author and historian Michael Sheane has just published his 28th book - and he has no intention of hanging up his pen any time soon.

Michael moved to Antrim in 1999 after the death of his mother, aged 87.

He lived at Ballygally on the Antrim coast, after having lived in the Finaghy area of Belfast, where he went to primary school.

He grew up in England, born to Irish parents - Eric Livingstone Sheane, a dentist who travelled across the UK for work, and Annie Elizabeth Kerr, a farmer’s daughter.

He has one brother, Derek, who comes to visit annually to Michael’s adopted home in Newpark.

Like his dad, Michael made many trips back and forth across the UK between 1967 and 1984, before he moved to the Larne area.

In Cheshire, he published six books and a further two in Ballygally, using the old art of lithography, with the remaining 20 books being published by a Devon company.

As well as his books, he has written many articles for and letters to the Antrim Guardian, Ireland’s Eye and Ireland’s Own, mainly on Irish history.

He has also appeared as a commentator on Ulster matters on English radio.

On his motorbike, he toured radio stations in England and also UK bookshops, going from city to city to promote his tomes, which have received coverage in all the daily newspapers in Northern Ireland over the years.

He has also travelled extensively in Ireland and still enjoys trips to lesser known towns and villages.

And during his working years, Mr Sheane was a self-employed printer, using his machine to produce items for all manner of businesses.

Michael’s latest book is ‘The Story of Holywell Hospital’ and ‘Patrick, A Saint for All Seasons’ is to be published shortly.

As well as his passion for history and literature, Michael’s hobbies have also included cine-photography and sailing, with his father owning a number of boats.

“I first started to have an interest in writing at Larne Grammar, where I was published in the school magazine,” he said.

“I later attended Orange’s Academy in Belfast, a mixed college.

“My father was a dentist, who went on to become the County Dental Officer for Antrim, earning the vast sum of £5000 a year!

“My first book was ‘Ulster and its’ future after the Troubles’, published in 1977.

“I predicted the end of the Troubles in Northern Ireland.

“In Cheshire I was the village printer, making mainly personal stationery and calling cards, with a little commercial work.

“I enjoy visiting Greystone and Antrim Libraries, which have a large collection of books on Irish history - I myself have collected about 300 books on Ireland’s story.

“I think St Patrick is my favourite subject to write about, I have now written three or four books about him.”

And there is plenty of material for Michael - the patron saint of Ireland was born in Scotland around 385 and was carried off by pirates to seven years of slavery in Antrim.

He escaped, trained as a missionary and returned, devoting the rest of his life to the work of bringing Christianity to Ireland.

Michael Sheane has examined the Saint’s Confession and a letter addressed to Coroticus (a British Chieftain), as well as biographical material was in the seventh century by the historians Muirchu and Tirechanthese, retracing the footsteps of a saint whose impact is still felt in Ireland more than 1,500 years after his death.

Michael has a set routine every day, trying to write for around one and a half hours a day.

“I try to go out for a walk in the morning, for fitness and to clear my head.

“I have done a number of walks in the Antrim region in the past, from Newpark into the town is one of my favourites.

“It usually takes me around three months to write each book, they are all around 60-70,000 words and I try to be able to write a book a year.

“My publisher will do a run of 4000 copies and I can order more as required.

“For me it is not about making income, it is a hobby and a passion and I hope people, especially young people, learn something about local history.

“My books are now in shops, libraries and schools, which is something I could not have imagined when I was at school!

“In my younger years I was much more sporty than I was academic, I won prizes for athletics and cricket.

“Then when I was around 17 I began to read voraciously and developed my passion for history English literature.

“I started to read about the history of Ireland, of Ulster and of Scotland and how interconnected they were.

“I also read Daphne du Maurier, Hemingway, Huxley and Steinbeck, among others.

“I especially admired the writing style of Hemingway and the works of Edgar Mittelholzer, who wrote about the plantations in Guyana.”

Michael’s books are produced by Arthur H Stockwell Ltd, which was established by Arthur Henry Stockwell in 1898 and has remained a flourishing concern run by the Stockwell family.

As a family business the aim of the company has always been to help and guide new authors.

In Michael’s latest book, he details how, since Holywell Hospital was opened as an asylum in 1898, there have been great changes in the treatment of mental illness and the way it is viewed in society.

In the past Holywell was often overcrowded and under-funded.

There were epidemics of infectious diseases and, in 1930, a devastating fire.

Then, particularly under Dr Boyd's leadership, great efforts were made to inject energy into the social life of patients and staff, and to make the hospital an increasingly pleasant place to be.

Instead of being restrained and forgotten, clients are given hope and are rightly able to feel they are a valued part of society.

And it’s not just Irish history - a keen scholar of Latin, Michael has also written about the Roman empire and Greece.

“I have no plans to give up writing and publishing into old age, it really is a vocation,” he said.

“I am always coming across new things to write about and I hope people enjoy reading my books as much as I enjoy writing them!.”