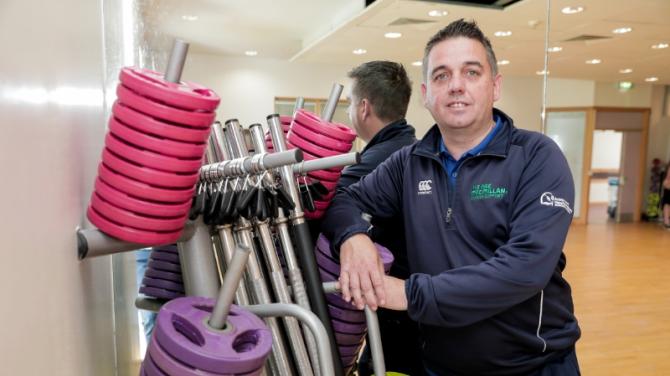 “IF this was a pill, you would pay a fortune for it.”

Those were the words of Dr Fiona Stewart, a participant on a project run by Macmillan in conjunction with Antrim and Newtownabbey Borough Council which aims to improve fitness for people living with cancer.

A pilot partnership scheme with Macmillan Cancer was approved in 2016 which aimed to establish a physical activity pathway for cancer patients in the Borough.

Based on evidence that being physically active can help prevent and manage some of the side effects of cancer treatment, such as fatigue, depression, muscle wasting and risks to heart health, a full-time Macmillan Physical Activity co-ordinator post was funded by Macmillan Cancer.

A total of £119,000 was awarded to Council to fully fund the post for the Borough over a three-year period.

As the programme moves into its final year, Macmillan Cancer has indicated that it remains committed to the programme with a reduced funding formula.

Following completion of the three-year pilot, funding will be on a sliding scale.

Funding for the Co-ordinator, post will reduce from 75% in year one to 25% in year three.

It was also noted at the Operations Committee of Antrim and Newtownabbey Borough Council last week that there is a current programme underspend of £10,000.

Council is awaiting written confirmation that this can carry forward to the new three-year programme.

The current three-year pilot runs until June 30 next year.

Macmillan Cancer’s contribution of £59,882 includes £12,000 for the final quarter of the current three-year pilot.

Upon confirmation of £10,000 underspend, there will be no cost to Council in year one of the new three -year programme, which means that Council’s contribution starts in year two of £20,084 and £30,698 in year three.

Should Council approve the funding the Physical Activity co-ordinator post and programme costs will be provided in partnership with Macmillan Cancer for the three years 2019 - 2022.

The contribution will not result in an increase in the overall net cost of service to ratepayers.

During a presentation to councillors last week, Diarmaid McAuley, Macmillan Services Programme Manager, said that half of people would receive a cancer diagnosis in their lifetime, but added that the prognosis was much improved compared to previous years.

He said that it had been proven that exercise is safe for people after cancer treatment and that in years past, people were urged to put their feet up and rest - advice which has now been contradicted by science and research.

Alan McCausland, Move More Co-Ordinator for the Borough, said that 438 clients had been taken on since July 2016.

He reported that classes were operating in Antrim, Ballyclare and Crumlin and that walking groups had been set up at Antrim Castle Gardens, Ballyclare and at Mossley Mill.

Classes include Yoga, Pilates and Mindfulness.

Mr McCausland said that he was ‘very proud’ to have helped deliver the programme.

Next to speak was Dr Fiona Stewart, a participant on the programme.

She told how she travelled home from a massive international conference on rare diseases in San Diego and was diagnosed with a very aggressive form of breast cancer just nine days later.

Her husband Sam was also later diagnosed with prostate cancer.

She went to an event at the Ross Park Hotel and listened to a representative from Macmillan speak about the benefits of exercise.

“If this was a pill, you would pay a fortune for it. All you have to do is move a bit more,” she said.

“It’s not just an exercise class, you meet people just like you, who ‘get it’,” she added.

Dr Stewart also walked to the station before catching her train to Belfast City Hospital for work every day and said her consultant was impressed by the improvement in her condition.

It has also been concluded that exercising five times a week after breast cancer may reduce mortality by 44 per cent.

“The programme gave me the strength to do the Couch to 5k challenge - before this, I was the world’s greatest couch potato.

“I would not have done that without the Move More programme.

“I can’t imagine what sort of a black hole I would have ended up in without the programme.”

“People think I am grumpy because I am grumpy; they don’t realise I am a cancer sufferer.

“They don’t know what you go through at the time.

“I thank Macmillan for all that they do in the dark days and dark nights, when it feels like there is nothing there, it feels like God has gone, everyone has gone.

“But they build you up again. I am really grateful for all the work they do.”

Neil Kelly of Alliance thanked Dr Stewart for telling her story and praised the council for its commitment to improving health and wellbeing, while the SDLP’s Noreen McClelland also hailed the Move More team for a job ‘well done’.

Her party colleague Thomas Burns said that council was ‘lucky’ to have Mr McCausland working with them, while Mandy Girvan of the DUP said there was a concrete link between physical activity and mood and welcomed the chance to work with Move More for another three years.

Councillors proposed the recommendation to extend the programme.