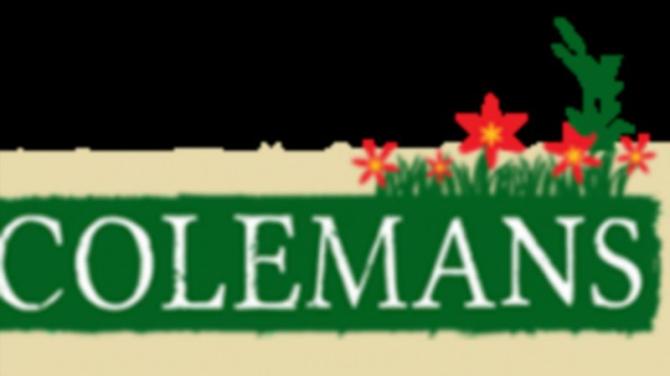 THE management and staff at Colemans Garden Centre and Café Restaurant in Templepatrick have launched their Christmas Appeal to help those who are less well-off have a better Christmas.

Colemans have chosen to support local charity, Manna 4 Many which provides street aid for the homeless in the Centre of Belfast and also a Giving Tree to support the Society of St Vincent de Paul (SVP) by donating Christmas presents for local children who would most likely receive none.

“Margaret, who worked as an auxiliary nurse in the Ulster Hospital for 30 years and who was awarded the MBE in 2003 for her fundraising services for the hospital, is currently working tirelessly with her team to create beautiful products to be sold at her stand on December 1.

“She has already prepared a cornucopia of fabulous items and as an avid knitter has also created a range of children’s clothing and soft toys which would be ideal Christmas presents.

“But she is not alone! Her friends have been crocheting baby blankets, knee rugs, white crochet angels and dish cloths to add to the stall.”

All proceeds from Margaret’s Christmas stall will go to help the homeless and provide Christmas presents for underprivileged children who otherwise would receive nothing on Christmas Day.

Alan said that Colemans had been ‘left stunned by some facts regarding poverty and were staggered to hear that one in 18 adults in NI said they have experienced homelessness of some kind’.

According to a report by homeless charity Crisis, the most common cause for homelessness is relationship breakdown or family dispute where a person has to leave the accommodation.

“The Rowntree Foundation found that the root of many people’s experience of homelessness in adulthood lay within traumatic childhood experiences, for example physical, mental and/or sexual abuse, bullying, neglect, witnessing alcohol or substance misuse and domestic violence in the home.

“New data also shows that one in six people in the country are at risk of poverty.

“The child poverty rate in NI is reaching 30 per cent and the group with the highest poverty throughout the last decade is lone parents.

“Nearly one in five 10-15 year olds are reported as having severe or moderate mental health conditions while one in four children in NI are living in a family which struggles to provide for their basic needs, providing a warm adequate home, nutritious food, appropriate clothing and pay for childcare costs.

“Poverty affects children’s health throughout their lives and through the Christmas Appeal, it is hoped that some small difference can be made to the lives of those in need.”