First it was a plan. Then it was a building. Now it's a school 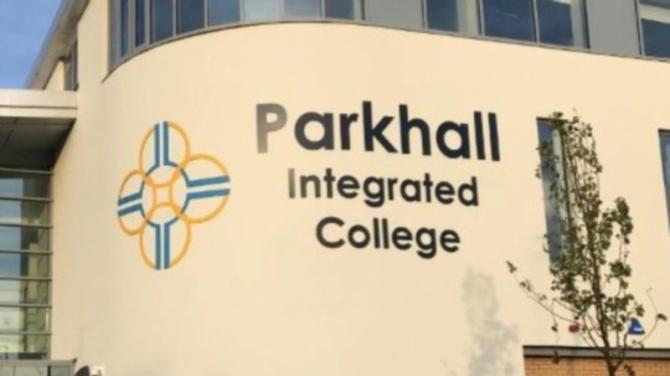 GIVEN that it is almost a year since the students flooded into the gleaming new Parkhall Integrated College, it could be seen as a curious decision to hold the official opening only this week - but when you are forced to wait more than 12 years, a mere 12 months is a flash in the pan!

And in many ways it was entirely appropriate. When the Antrim Guardian last visited it was still very much a work in progress. It was still an empty shell, albeit a hugely impressive one.

But what a difference a year makes! It is the same building, but the addition of that vital ingredient - the young people themselves - has transformed it totally.

Now the walls are lined with their work. At last Parkhall has leapt from the drawing board to become a living and breathing school.

Most of the students were not present for the grand opening, instead leaving early to allow the VIPs to see it for themselves - and many of these tours were led by pupils.

And their passion for their school was there for all to see. This was clearly not a chore. Oh no, they were proud and appeared to take great delight showing it off.

But perhaps inevitably, no-one was more proud than principal George Beattie. He has been hands on from the early days, patiently guiding the project even when it looked like the long journey was doomed to failure as irritating months of delays turned into frustrating years of uncertainty.

When the cheque was finally written, he remained a constant presence on the site. How many principals do you know with their own hard hat?

He looked a happy man on Friday afternoon as he addressed a large crowd in the cavernous assembly hall. There were fellow principals from several local schools, along with many familiar faces who had worked at Parkhall down the years.

Local politicians were also out in force. South Antrim MP Paul Girvan was there, along with MLAs Pam Cameron and Trevor Clarke. And it was not just the DUP toasting the success of Northern Ireland's newest integrated school. SDLP councillor Roisin Lynch was present too, as were Ulster Unionist Drew Ritchie - who sat on the Board of Governors for a quarter of a century - and Alliance rep Neil Kelly.

Mr Beattie welcomed them all to the building ‘many thought would never happen’.

And he personally thanked all the political reps who helped make sure it did.

“The cross-community support this project enjoyed was quite unique,” he said.

“I must offer special thanks to Dr McCrea who is here today. His standard line throughout was ‘we need to get this over the line’. And eventually we did.”

There was also ‘huge thanks’ for the staff who had endured a split campus for over a decade.

“Closing two old schools and moving into a new one in the middle of the school year was a monumental task!” the principal said.

But they certainly made the grade, ensuring a smooth transition and delivering on their promise to launch an A Level syllabus for the first time. That’s dedication for you.

Mervyn Alexander, the chair of the Board of Governors, addressed the room when the applause finally died down.

“It’s my pleasure to be here today for this historic milestone in the life of Parkhall Integrated College,” he said.

“This day was a long time coming, and there were some who thought it would never come at all. Yet here we are in this beautiful new building.”

It all began, he added, when former principal Roy Dickson, who was in the audience, began lobbying for a new sports hall. And from that small seed a new college has grown.

He also paid tribute to the political leaders who had played their role, including the three MPs who had been involved during the lengthy gestation, as well as the team of MLAs and councillors. The results, he said, speak for themselves.

“For 47 years this college has been a major part of the community. With this magnificent new building we believe it will continue for the next 50 years and beyond.

“This building combined with the dedication of the staff will lead to young people in this area being provided with an excellent education - and continue to raise the educational standards in the Antrim area.”

That was echoed by Alderman John Smyth, the Deputy Mayor of Antrim.

He said the new building was ‘fantastic’, and praised Parkhall for continuing to run a youth club three nights a week, as well as hosting several clubs and community groups.

The DUP man paid warm tribute to the people who had pursued the vision for the school and helped ‘make the dream a reality’.

Next on stage was the former Chief Executive of Derry City Council Sharon O'Connor, who is now chair of the Education Authority. The last time she visited the Parkhall site a good pair of Wellington boots were a necessity - and she was clearly impressed by what had been achieved in the intervening months.

It had been a long journey, but ultimately a worthwhile one.

“It is not easy to get a school delivered and it’s wonderful to see it here today. It really is a joyful experience,” Ms O’Connor said.

“It gives me great hope for the future of education.”

She paid tribute to some who had played an integral role, adding that it was a reflection of how long it had taken that many of them had since retired.

But the focus now, she said, was very much on the future.

“I’m sure this will be a place of dreams. A place of ambition,” she added to thunderous applause before unveiling a plaque commemorating the day.

Speaking afterwards, Drew Ritchie said he was ‘immensely proud’ of what the team at Parkhall had achieved for future generations.

“There’s no doubt that the building is very impressive and I’m delighted this day has finally arrived. I’ve no doubt that it will continue to serve Antrim for many years to come,” he said.

Councillor Neil Kelly welcomed the multi-million pound investment in integrated education and urged local families to take advantage of the cutting edge facility on their doorsteps.

As the crowd began to clear one man held back, examining the building in a quiet moment of contemplation. It was William McCrea, who had been credited by multiple speakers as one of the key drivers behind the project.

“This is the result of a lot of work carried out by a lot of people over a long period of time,” he told the Guardian.

“I brought all the elected representatives together with the Board of Governors and the Education Board to make a joint presentation to the Department.

“We were finally able to get it over the line, even though it seemed to have fallen on a number of occasions!

“This is a wonderful day after years of lobbying, it really is.

“I must pay tribute to George Beattie himself. He was the real driving force. His perseverance has created a centre of excellence for this community.”

It is certainly a very different school than before, and no-one knows that better than Mr Beattie’s three predecessors.

Roy Dickson was at Parkhall for 32 years, including 22 in the top job.

“What they have achieved is simply magnificent. Parkhall was always a great school, and now it has been given the building it deserves.”

Mr Dickson was followed by Tom Skelton, and he said the new school was ‘remarkable’ and a testament to ‘years of team work’.

Mavis Knox took early retirement a decade ago, but she admitted that she has many fond memories of her time at Parkhall.

“The new school is terrific and you can tell that the pupils and staff are very proud of it. I would like to congratulate everyone involved,” she said.

And so a new chapter begins at Parkhall Integrated College. They have been patient, but then they can afford to be as they confidently look forward to the long journey ahead.