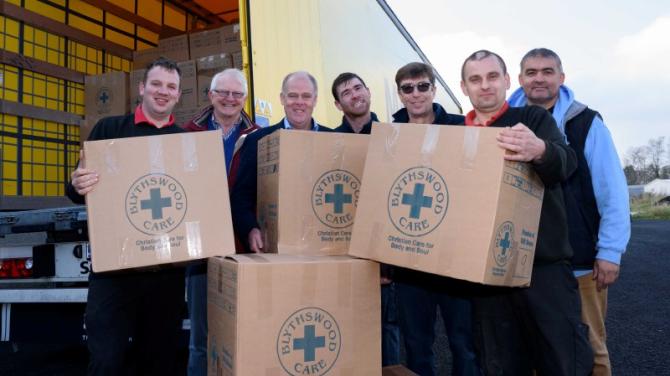 A CHRISTIAN charity fighting to keep its premises on Greystone Road in Antrim is making its first delivery of festive gifts to impoverished children this week.

Blythswood has been operating from a former car showroom on the Greystone Road since March 2017.

They opened in a blaze of publicity and with a Royal seal of approval when Miranda Tisdale, the High Sheriff for County Antrim, formally cut the ribbon.

Driven by its Christian ethos, Blythswood care for, feed, clothe and educate orphans, train widows and give educational opportunities for disadvantaged people.

It is valuable work they have been carrying out for 50 years, and CEO Harry Latimer was proud to bring their unique brand of care to Antrim.

But six months ago, the charity unsuccessfully lodged a retrospective planning application to officially change the use of the showroom to a charity shop and distribution warehouse.

According to the council’s Planners ‘there is no Certificate of Lawful Development to establish the lawfulness of that previous use’.

They maintain that the land was never zoned for ‘economic development use’ so the charity would not simply be swapping the sale of cars to the trade in second hand goods - it would be setting a precedent that is contrary to the Planning Order.

Planners were also concerned that the Greystone site will damage trade in Antrim town centre.

These Christmas gifts are destined to be distributed to needy children, teenagers and adults in Hungary by Blythswood partner groups based there.

Every year thousands of brightly wrapped shoe boxes filled with essentials, such as soap, toothpaste, a hat, scarf and gloves are donated by people in Northern Ireland.

To many, these simple gifts might seem mundane, but to the recipient they can be a source of great delight, providing them with practical items they couldn’t normally afford to buy.

For 25 years Blythswood Care have been sending filled Christmas shoe boxes to impoverished communities in Eastern Europe and beyond.

Mr Latimer said: “So far over two million boxes have helped bring joy to individuals and families who might not receive any other gift this year.

“Blythswood are dependent on the help and support of individuals, schools, churches and businesses who support this annual appeal.

“From the filling of boxes, collecting them, sorting, checking and packing them, this project is totally reliant on fantastic support we get from local communities.

“We are very grateful for the assistance from W S Dennison in the loading of our first lorry at the Blythswood shop in Antrim.

“If you or your business would like to be part of this work then please contact us to see how you could help in this work.”

Mr Latimer said that the shop had received an order from council to quit the premises, which was rescinded when the charity offered to meet with planning officers to discuss the matter in January.

He said that Blythswood is now having to pay for a town centre retail assessment as part of supporting documentation for a new planning application to be lodged in the New Year.