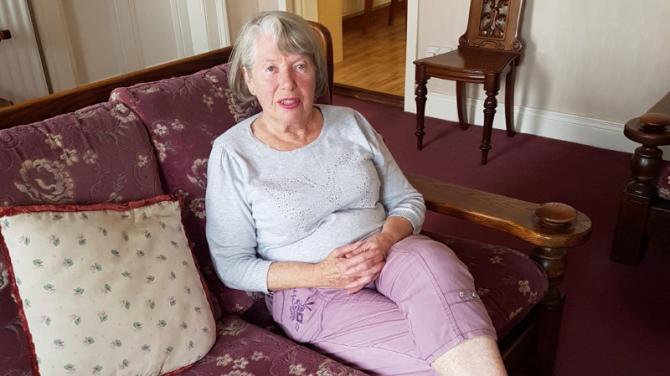 ONE of the best-known faces in Antrim town, Margaret Kelly came from humble beginnings.

Born Margaret McNeilly, she grew up one of a family of nine on the shores of Lough Neagh, with her mother cycling into Antrim every day.

Water was collected from a pump or well and milk was also collected and carried for miles.

In the 1950s, the McNeilly family was one of the first to move into Firfields.

Margaret’s father was a fitter at Aldergrove and her mother was from Templepatrick.

Her mother and grandmother would often be seen lifting the gates at the level crossing in the village.

“My mother was a book of knowledge. If I had any questions, she always had the answer,” said Margaret.

“She worked so hard to bring the nine of us up.”

As a teenager, Margaret went to ‘do her time’ in Belfast at Anton’s hair salon in Donegall Place.

She would ride her bike into Antrim and then catch the bus or train.

She served under the ferocious Miss Mayhew, who was ‘four foot nothing’ and took a size two-and-a-half shoe.

“She had a cat that used to come and greet her every morning and the girls would say that it would keep an eye on us and tell her what we were up to!

Later, Margaret moved to Scotland and worked there for three years before returning home to Antrim to marry and give birth to the oldest of her two sons.

She worked for a year with Mrs McIlwaine on High Street - whose son was a barber, close to where Boots now stands.

After a year, Margaret took the plunge and decided to go out on her own.

In the early 1960s, she bought and opened her own salon in High Street.

Now retired, Margaret handed over the reins to Christine McGarry a few years ago, but has a wealth of fond memories.

“I remember Antrim in the good times,” she said.

“I knew Mrs Schierbeek (wife of the factory managing director Dr Roelof Schierbeek) very well, she was a peach.

“She had a marvellous garden and an impressive indoor garden as well.

“She used to be driven from the factory in a big car and have her hair done before jetting away somewhere.

“When the traffic wardens first came into the town, she came in with another friend, Mrs Dixon, wife of the doctor at Enkalon.

“When they went back out there was a sticker on the window of the car.

“Mrs Schierbeek went after the warden, saying: ‘You naughty boy!’

“She was outraged, she said ‘you can’t do that to the local people’.

“Enkalon brought a great boom to the town.”

Margaret’s original premises were at the front of number 49 High Street, where the Antrim Guardian offices are now situated.

Back then it shared the street with Hall’s Hotel and the Massereene Arms, now both long gone.

“I wanted an open plan salon but I was told no one would want to be seen in their rollers or caps through the front windows!”

Eventually the shop moved to the rear of the building.

Having a shop in the town’s High Street during the Troubles presented its own challenges.

“I was sitting in Hall’s Hotel playing bridge and a policeman came in and said ‘Out!’ - I’ve never seen people scatter like it.”

After one particularly devastating blast, Margaret and her staff had to do without windows for three months.

Taking on such an historic building may have seemed like a strange thing to do for a young mother in those days.

“I suppose I felt very capable,” she said.

“I came from a big family and they all helped me out when I needed it.

“Some people thought I was mad when I took it on and especially with the bombs going off, but I stuck it out.

“I remember going into Progressive in Belfast and asking them for a loan to help repair the bomb damage and they told me I was one of the first women they had ever given a loan to.

“The building is listed and it is a big part of Antrim’s heritage, it dates back to the 1860s.

“I love it. The decorative leaves over the windows at the front of the building were blown off a few times.

“I had them put back on and painted green to make them stand out.”

Fiercely private herself, as a hairdresser, Margaret found herself in the position of sharing the life stories of many of her clients.

“Some of the customers have been so loyal over the years, they still go in to Christina. One of my favourites was Mrs Burns, she lived in Australia but came back to Antrim.

“She sadly passed away recently.

“People really take you into their confidence when they go to visit the hairdressers, they confide in you.

“I would never tell a soul anything that was said to me through all those years.”

After many decades in the industry, she has also seen many fads come and go.

“Technology has really improved. When I worked in Belfast I remember the roller machines, they all had to be wired up to your head.

“The people in Belfast liked the latest fashions and styles and some of the children could barely hold their heads up with the weight of the rollers.

“I’ve seen lots of styles and fashions come and go. I went to London and Switzerland and lots of other places to learn all the different techniques.

“When I started there were very few hairdressers, now there is one in every nook and corner.

“I do remember Norman Frederick, but he has gone now. Peter Mark came into the Castle Mall shopping centre and they went too.

“Back in those days everyone worked six days a week, then it went down to five and a half, then five.

“The older people would still want their perms, the younger ones are looking for much simpler styles.

“And I can always tell when a young one has been to visit certain barbers!”

Margaret has seen many changes in Antrim over her years operating a business in the town.

“Back then you could buy anything you wanted in the town. There was Hall’s, the Massereene Arms, the Bluebird Cafe, everything,” she said.

Behind the building is Clarke Court, now a housing development, which used to be one house owned by the Clarke family, with its own wartime shelter underneath, on top of which a car park now stands.

“They used to bring Mrs Clarke out for a walk every day, no matter what the weather. If it was cold they just wrapped her up in blankets.

“There was Gracey’s, Palmer’s, George Patterson’s, Mrs Lowry, Ivan Gillespie and John Wilson in the Co-Op.

“When I was a girl, my mother would ride her bike into town two or three times a week to get the messages.

“Then there were two bread men, and the milkmen started doing their rounds and they would bring messages for you if you wanted, that made life a bit easier!

“When you drive into Antrim you think you are going into a massive big town and when you get here there is just one street - but I wouldn’t have it any other way, I love the town.

“I remember very clearly the first time I drove into the town and it had been closed off with no through route.

“I was shocked and I still don’t know why they did it.”

But despite that, Margaret cannot see herself living anywhere else.

“No matter where I go, I always look forward to getting home and I am never happier than when I am back in Antrim!

“I take a walk around the town twice a day, I think it is very important to keep active.

“I’ve seen a lot of faces come and go, but hopefully I’ll be here for a long time yet.”