Bereavement Friendship Group offers support for those struggling with loss 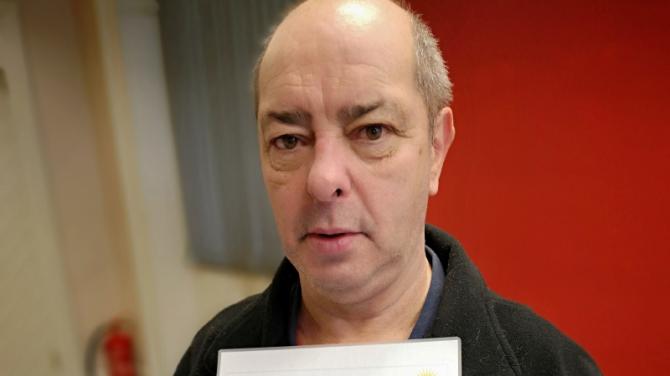 THIS may have been the most wonderful time of the year, but for some people, it can be one of the hardest times.

For those coping with grief and bereavement, the Christmas and New Year period can make their loss seem even more unbearable.

While lights were twinkling and friends and families rang in 2019 together, others were anxious and heartbroken as they faced a new year without their lost loved ones.

But one group of local people are determined to prove that with the right support, you can find a way through your grief.

The Bereavement Friendship Group is entering its second year and offers a space for those suffering to share with others who have experiences a similar kind of loss.

The group may still be in its infancy, but its dedicated founders are steadfast in their vision as they plug what they feel is a gaping hole in local provision.

Tommy Riddell, who has been helping to steer the group since its inception understands all too well the impact the loss of a loved one has on your life.

“It was my wife Helen’s fourth anniversary on December 22,” he told the Antrim Guardian.

“I did that myself for years but unfortunately, it reaches a point where you have to bring in carers.

“She died on her 54th birthday in hospital.

“I miss her everyday and it hurts that she never had the chance to see our two beautiful granddaughters grow up.”

Tommy dealt with his loss in his own way for some time but he soon realised that there was very little in the way of support for people in a similar situation.

He and his co-founder, Pauline Kelly met with Cruse Bereavement Care in a coffee shop in Ballymena to discuss how they could plug this gap.

“Six months later, we held our first meeting at the Dunsilly Hotel and since then, we have moved to the Safe Space to be Me premises on Bridge Street in Antrim,” Tommy said.

“We have people from Antrim, Toome, Magherafelt and even someone from Belfast.

“You very quickly realise that there are so many other people who have a sad story.

“Everybody has been through the loss of a loved one, whether it’s their husband or wife, a parent or someone else very close to them.”

Since the group started out, there is now currently a core group of around 10 people who meet every month.

“It’s not just sitting around talking about death, though,” Tommy explained.

“A girl from Cruse comes along and she helps with craft work so we’re always doing something.

“We made memory boxes about our loved ones and I was able to do that for my grandaughters, Cora and Aoife.

“We’ve made other things like salt jars and lovely memory glasses.

“There’s the social side of things too.

“We all pay a small amount each month and that’s put away so that come April, we can maybe go out for a wee tea together and in December, we have a wee Christmas do.

“It means that nobody has to struggle to find the money for these things at the last minute.”

Tea, coffee and buns - along with chat and carry-on - are a constant across the meetings and while the group is always keen to welcome any newcomers, there is no pressure.

“We introduce you and if all you feel like saying is your name and telling us the person who you’ve lost, then that’s fine,” Tommy said.

“There’s no pressure at all but if you want to tell us all about that person then we’re here to listen.

“You can talk as little or as much as you want and you know that you’re talking to people who genuinely understand what you’re going through.

“If you come along and it feels too much or too raw, then that’s okay too but the door is always open for whenever you feel ready to come back.”

Tommy is also keen to look into extending the group to welcome people who have been at a crisis point, for example, those who have taken an overdose.

He would like to be able to welcome people in this position along with their families to benefit from the support before things get any worse.

“It’s about building a support network,” he said.

And offering support for others is something that the kind-hearted gent is very familiar with.

When he’s not helping to mind his two granddaughters, Tommy spends his days helping out some of the local senior citizens.

“I can get them their shopping or cut their grass or do a bit of cleaning.

“It’s all about friendship and that’s what this bereavement group is all about too.

“We want to let people who have lost loved ones know that they are not alone.

“We want to welcome them to the group.

“This grief, it’s like there’s a bond and those who have been bereaved don’t need to hide away.

“We’re all like a family now and our door is always open.”

The next meeting of the group will be held on January 8 from 7.15-9pm.