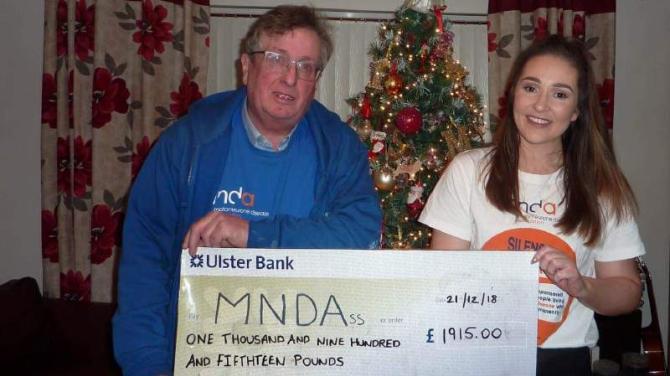 A RANDALSTOWN woman who lost her father to Motor Neurone Disease has proven that silence really does speak after she raised almost £2000 for charity following a 24-hour sponsored silence.

Maeve Cassidy and her family were heartbroken when her dad Patrick - known as Paddy - lost his battle with the cruel illness in August 2016.

Paddy ‘fought the good fight’ for two and a half years and while his loss is immeasurable for his wife and four children, they have turned something terrible into something good as they rally to raise awareness and much needed funds for the condition which stole him from them.

From the viral ice-bucket challenge and taking part in the marathon, ‘Paddy’s Army’ is no stranger to channeling their grief in his memory and now Maeve has raised yet more money with her sponsored silence.

“With Motor Neurone Disease, it can be upper or lower and Daddy’s was upper so he lost his speech,” she explained.

“I had been thinking about just how difficult that must have been for him and that’s when I knew I wanted to take part in the ‘Silence Speaks’ event.

“When Daddy couldn’t talk to us, he used to point to letters to let us know what he wanted or needed and to lose your speech, it just seems like one of the worst things in the world.”

With her mind firmly made up, Maeve began to make the arrangements and timed the silence to run from 3am until 3pm, ending just before she boarded a flight to celebrate her sister’s graduation in Edinburgh.

She started off with a squash game with her brother and was surprised that she was able to remain quiet even when her game let her down!

“It wasn’t easy when you were out in a shop and people asked could they help you and I was pointing to the sign I had to try to explain,” she continued.

“The hardest part was when I was at home in the evening and not being able just to talk to Mummy or Patrick.

“Through that time, all I could think about was Daddy and just how hard it had been for him.”

Maeve powered through the emotional maelstrom for the full 24 hours before completing the challenge during one of her university lectures.

Just weeks after the fundraiser, she has handed a cheque for £1915 to Stephen Thompson from the MND NI Branch.

While initially hoping to raise £50 to £100 for the charity, Maeve was amazed as the money began to snowball.

“The money will all stay here in Northern Ireland, that was very important to me,” she explained.

“The people who work for MND here, they are volunteers and they’re just amazing.

“People have been so generous and I’m touched that they’ve donated so much in Daddy’s name.

“In the pack I have, it explains that £550 can buy an electronic specialist pad to help people to communicate.

“I couldn’t believe that I even first of all reached the £1650 mark to pay for three of these but to get to £1915 really blew me away.

“I’m so full of emotion and it’s a wonderful time of year to hand over the money to help others in need.

“This charity will always stay close to my heart and this is only the beginning of many fundraising adventures.

“Daddy has inspired me so much in my life and will continue to fight in honour of his legacy.

“I also want to say thanks to Stephen Thompson from the MND branch NI for coming to receive all the donations and thanks to the MND NI Association for all their continued support since Daddy’s passing in 2016.”