Return to the town I loved so well 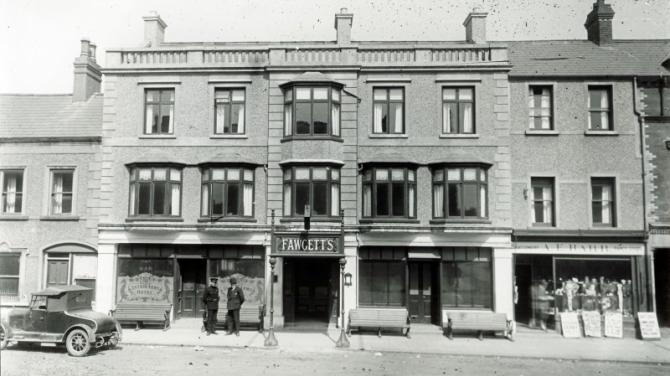 WHILE it’s undoubtedly true that distance does make the heart grow fonder, it can also be a source of profound sadness.

Nothing stays the same, but change often occurs at a glacial pace so that it goes virtually unnoticed.

Not so for John Fawcett and his sister Mildred. Infrequent visitors to Antrim, for them the differences can be stark - and shocking.

They spent their formative years in the town but moved away as children following the death of their beloved mother in 1950.

After a spell living with family in Clones, they moved to England where they have remained ever since.

But the roots had been laid, and down the years they have periodically travelled back to the town they loved so well.

Indeed, they have just returned to Nottingham from a 10-day trip ‘home’ - during which they marvelled at some changes, and lamented others.

“We all used to go in there when we were kids to muck around in the tunnels. It was a fantastic playground - though you had to be careful not to get caught!” said John.

“The Antrim Show was also a big event back then and the crowds were huge.

“The field in the Castle Gardens with the huge hedges was the show ring and it was quite a sight to behold.

“Quite a lot has changed - well, the castle’s gone for starters which is a bit of a shame - but they have done a terrific job restoring what is left.

“We met up with Mr McGuinness during our visit and he was very helpful. He’s a gentleman and he helped us with our research into our family.”

And it turns out that the Fawcetts were a rather remarkable bunch.

Readers of a certain age will need no introduction to the clan.

John’s great uncle Bob was a ‘great hockey player’ and ‘Antrim through and through’ - but it is perhaps his grandfather Samuel who did most to make the family a household name.

He was one of 13 children born into a family of modest means, but he was determined to find his way in the world.

He joined the Royal Horse Artillery and served with distinction before turning his attention to the world of business.

Tapping into the tourist potential of Antrim, he went into the hotel trade. It may have been called the Antrim Arms, but it was the Fawcett name in big letters above the door.

It proved a hit with working-class folk who sailed over from England, mainly Lancashire mill workers, to sample the beauty of the north coast - and some good old-fashioned Antrim hospitality.

The venture proved to be a huge success and Samuel ploughed money back into the business creating ‘the largest dining room in town’ - seating 100 people!

Sadly the hotel perished in a devastating fire in 1938.

But by then the family had established themselves among the town’s nouveau riche.

In 1927 Major GF Cavandish-Clarke, a former staff officer of the 108th Infantry Brigade, put his fine house on the market - but it would be beyond the reach of most.

To sweeten the deal, he threw in a few acres of glorious gardens and a round tower!

Samuel Fawcett, who already owned ‘Northlands’ at the top of Fountain Street before it passed into the ownership of the Catherwoods, did not have to be asked twice.

John fondly remembers staying in the grand house as a boy - particularly one striking feature.

“There was a huge staircase and we spent many happy hours sliding down it!” he said.

“Back then there were stairs into the round tower too, so we able to clamber in there to play as well. It was idyllic, it really was.”

John has been back since, after it became the council offices, and though the grandeur had faded he was pleased that the building was still in use.

During his recent visit he contacted the council to enquire if he and his sister could have another peek inside - but this time top brass said no.

“They said something about health and safety, which was disappointing, but we went to have a look around the building anyway,” said John.

“It was in a pretty sorry state, I have to say. It’s deteriorating fast.

“It was really sad to see the Steeple in that condition.

“Thankfully some of the old buildings are still standing, but Antrim as a whole is a very different place than it was back then.

“When I was a lad it was all trees and green fields, now it’s all housing developments.

“The town has grown but that’s a bit of a mixed blessing, I suppose.

“When I think back to the simple things, like climbing trees or going for a stroll in the bluebell wood near Firfields, that for me is my Antrim. That’s the town that will always have a place in my heart.

“It’s changed a heck of a lot. Back then everyone knew everyone. Postman Billy McKee delivered the letters, as well as the gossip! It was great.”

Progress marches on, of course, but John said one thing never changes - ‘the kindness and generosity of the people of Antrim’.

“We met some wonderful people during our trip. It was great to talk about the good old days.

“Nothing stands still and unfortunately we are all getting a bit older, but nothing can tarnish those happy memories.

“We still have family in the area, and we had a great time catching up with the McKee family and our old friends.

“We had a good chat with Anna McCabe, who never seems to change, and the lovely people at All Saints’ Church who helped us find documents and records.

“Everyone was so warm. It really did our hearts good.

“We would like to thank each and every one of you for all your help.”

Undoubtedly they will be back, but for now they are back in Nottingham where John lives in a street named in honour of moon landing hero Buzz Aldrin.

Turns out too he has corresponded with the great man and a signed photograph takes pride of place in his home.

So how did a man born in Antrim in 1943 become acquainted to one of the legends who took part in the first moon landing?