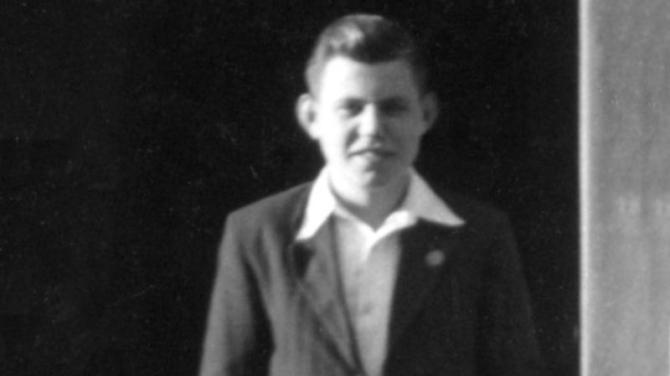 SAM Dunlop, like many from Antrim, began life in Ballymena - but we won’t hold that against him!

A former pupil of Guy’s school and ‘the Model’, he left at 14 to enrol in ‘the University of Life’, getting a job at an off-licence on Mill Street, owned by Albert McClelland, who was chair of Ballymena United FC and also a solicitor.

He worked for a time at the Electricity Board, where he sustained an injury whilst hoisting poles into the boggy ground around the Frosses - long before the days of Health and Safety legislation was in place.

Whilst many of his chums ended up working in Enkalon, Sam himself went to London and ended up in Southampton working in the shipyards.

He fitted out the Canberra, as well as ‘Mary’ and ‘Elizabeth’.

Years later, during one of his two stints as Mayor, he met the Duke of Edinburgh.

Sam told the Queen’s husband how he remembered him from those days.

In typical caustic style, Prince Philip replied: “I can remember the Canberra, but I can’t remember you!”

Sam, himself known for a sharp wit, shot back: “That’s funny, how did I remember you and you can’t remember me?”

When he was approached a short time later by a member of the Royal security detail, Sam was convinced he was about to be incarcerated in the Tower of London.

“He asked me what I had said to the Duke, and when I told him, he said ‘that’s the first time he’s smiled all week!’”

Other workplaces included construction, driving and a stint at Thorer UK in Muckamore until it closed in the early 1990s.

The pair had two children, Sharon and Paul, who is following his father into local politics, and four grandchildren.

Losing Violet four years ago to cancer was a huge wrench.

The couple were married in Doagh in 1969.

“Anyone who has gone through it will tell you, it’s miserable.” he said.

“It’s like losing your left and your right arm.

“The children have their own lives to live but they do come and visit every day.

“But you never get used to it. I would still look over to her chair to keep her going about what’s going on with Coronation Street.

“One day I heard her voice, as clear as day, saying ‘are you going to lie there all day?

“I’m just glad that it is me left on my own and not her.”

He went into politics, joining the DUP in 1970.

At the same time he joined the residents association in Newpark and still adores his home estate.

“We both watched TV, but we never needed to,” he said.

“There has always been so many comings and goings here, cars and people, up and down, all day.

“We never really had any bother either, there always seemed to be something for the young ones to do in this end of the town.

“I remember the estate agent Tom Evans telling me that he could sell a house in Newpark every week, and one in our row every day.

“We used to have a best kept garden competition and Violet loved her plants and flowers, the place looked fantastic.”

Sam also joined Muckamore Choral Society and performed in pantomimes and other musical events all over the borough.

He is also a keen bowler, helping to set up four clubs, in Muckamore, Antrim town, Randalstown and Rathenraw.

The Muckamore club is celebrating its 40th anniversary this year.

However Sam’s struggle with neuropathy, which causes nerve damage and numbness in his legs and feet, means that he prefers to watch as a spectator these days.

He also was on two Boards of Governors - at Parkhall and Ballycraigy Primaries and continues to worship weekly at First Donegore Presbyterian Church.

And he is an avid follower of football, including Ballymena, Liverpool and Rangers.

His faithful dalmation, who he lost aged 13, was even called ‘Coist’ - after Ally McCoist, the former Rangers manager and record goalscorer for the club.

Sam credits walking the dog three times daily for helping to cure his back problems.

His approach to canvassing took him all over Antrim, but he had an unusual approach.

“I was at one time the only DUP councillor in Antrim and I topped the poll nine times,” he said.

“But I never asked anyone to vote for me.

“Strange as it seems, but if you ask someone if they will vote for you, rather than get into a row with you, they will usually say yes, and you will never know if they voted for you or not.

“So I never asked. I never knocked a door either.

“I would have put a leaflet through a door, and if someone opened the door and said ‘c’mere, I want a word with you’, I would go back and speak to them, but I never saw the point of bothering people.

“People ask me if I miss my council and I say, yes, I did miss it, for about ten minutes afterwards!

“All joking aside, I really enjoyed the camaraderie, we were on great terms with all the staff members in Antrim and it was great to be able to make a difference to people’s lives.

“I would go out to the football or to the shop and I never got there as so many people would be stopping me to talk about one issue or another.

“I do remember one time that I was playing bowls at Allen Park on a Saturday and it had been raining all day, it was even getting through the wet gear.

“The team we were playing were from down the country, about 50 miles away, they were soaked too.

“I got home eventually and my wife said there was a women down the road who was worried about flooding so I said I would get in and have a shower and then I would go and see.

“So I went down and this woman’s yard was on a slope and the water was almost coming in her door.

“She said that no one else was helping her and I made a few calls and everyone was up to their necks so I went home again and grabbed two big buckets and started collecting the water and emptying it out on the street.

“This was working very well for about two hours until someone else shouted over and I realised that all the water I was emptying out onto the street was running into someone else’s garden.

“I think I finally got back home again at about 10.30pm that night.

“A lot of people don’t understand what council’s responsibilities are but if I was able to ring someone in the DOE or the Housing Executive and help get something sorted, I would.

Like many Antrim residents, he has seen a lot of changes in the town and laments the fact that there is nowhere to get ‘a good pair of shoes!’.

“I like to buy very good shoes,” he said, they are good for your feet and they last you longer, but I have to go to Ballymena or Coleraine now.

He blames the advent of online shopping and the lack of free parking for the decline in town centre retail, adding: “The same people who complain that there are no shops left are the same ones who will buy everything off the internet!

“You even find people will go to a shop, try something on or look at it, and then go and order it online for cheaper.

“It’s no wonder our town centres are going downhill.”

Similarly, Sam resists the incessant push to put everything on the internet.

“I don’t want it, I’m not interested, you want to find something out now and it’s all ‘dot this’ and ‘dash that’!

“All people want to know is what day their bins go out or if there are any functions they can go to in the town of an evening, they don’t want to go having to open up a computer to find out.

He remembers dark days in Antrim - the Wayside Halt murders of 1974 are etched in his memory, while he was also victim of an attempted armed robbery in the grounds of Moylena House, where the cricket club used to be situated.

“They forced us out of the car at gunpoint and they were chasing Davy Craig around the carpark threatening to shoot him if he didn’t give them the keys.” said Sam.

“He said ‘shoot me if you like, there will be thousands at my funeral’.

“Once they realised the cash all went down a chute and into a safe and that they weren’t getting anything off us, they legged it.

“I haven’t drunk for years but we let ourselves back in that night and pushed the brandy optics a few times.

“When I got home, my wife told me that some fellas had run up past our house.

“There was a car burnt out at the bottom of the road.

“We put two and two together, they had really badly disguised Cockney accents and at the time there were soldiers living in Caulside.

“I’m sitting here laughing about it now, but it was very scary at the time.”

Despite exiting the Civic Centre in Antrim in 2014, he keeps a keen eye on local politics and is particularly pleased to see the first sod cut on the building of the new Gateway Centre at Antrim Lough Shore.

“That was one of my projects and I am pleased to finally see it starting to take shape,” he said.

“As I said at the time, visitors to Lough Neagh in Antrim are faced with a 16th Century toilets and an 18th Century cafe - it is good to finally see some progress.”