'My guide dog has changed my life' 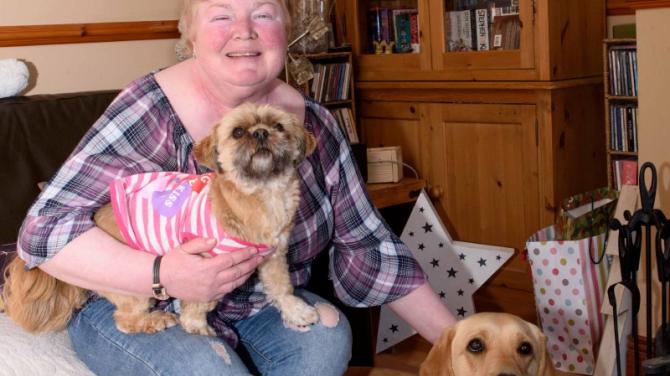 DANDERING down to the shop for a few treats, reading your favourite book or magazine or exploring a new town on a day out, these are all things most of us take for granted every single day.

For Randalstown woman Debbie Shaw, these have been just some of the difficulties she has faced for her entire life.

Born with albinism, Debbie really didn’t think much about her eyesight, admitting that even now, she doesn’t know what ‘normal eyesight’ is.

She attended Randalstown Central Primary School and Randalstown High but struggled with bullying, particularly as she tried to balance her education with her sight loss.

She had to run up and down to the blackboard and eventually received special glasses with magnifiers but admits it was ‘too embarrassing’ to wear them.

“It was hard, I suppose it did leave me depressed but I put a mask on as best I could,” Debbie said.

“In PE, I was very much excluded, you were always going to be the last one picked for any team and I just refused to do ball sports after a while but then I was offered gymnastics and found something I could excel at which was lovely.”

Debbie’s mum bought her a magnifying glass and with that and her own determination, she performed well in her exams and went on to Ballymena Tech to study a family and community caring course.

Debbie had found her vocation and received an award for her ability, refusing to be deterred - even cycling four miles there and back for a placement!

After completing the course, Debbie was delighted when she was offered a temporary post as a carer at Antrim Day Centre.

“I was on buses with the clients, helped wash and feed them and things like that.”

Debbie earned a full-time permanent post and was thrilled to be able to contribute financially to the home where she lived with her mum.

A clear asset to the day centre, Debbie was asked to step up to cover a colleague’s maternity leave and with the help of her sensory support worker, she gave it her all - even ensuring all her paperwork was completely up to date.

“It took me longer to do it than everybody else but I did it,” she laughed.

Debbie was responsible for care packages, activities and outings and says that she had a smile on her face every day when going to work.

In 1998, she decided the time was right to get her own house and she purchased the home in The Oaks where she still lives today.

Sadly, Debbie’s mother passed away suddenly three months later and, in her own words, everything began to crumble.

“We were so close and now I couldn’t lift the phone and talk to her,” she recalled.

“My life at that point just didn’t matter.

“I stopped eating, I became anorexic, I self-harmed and ended up in hospital on a number of occasions with overdoses.

“I was coming home alone and it was horrendous.

“I was sent to occupational health in work and they weighed me at under six stone.”

Debbie spent seven months in Tobernaveen, along with other shorter spells and said eventually, something just ‘clicked’.

“I just thought what am I doing to myself?” she said.

“I knew my mum wouldn’t have wanted to see me like that and that I had to start to move on.

“It took a huge amount of strength because I was devastated at having to leave the job I loved.

“I started to build myself up again but I was scared to leave the house in case people were talking about me.”

Debbie received a phonecall from Blind Disability Sport NI and someone came to speak to her about blind golf which she then began to play at Allen Park.

Her sensory support worker set up a meeting for Debbie and three other local ladies with sight loss and to this day, they are still close friends.

Debbie also joined South Antrim Community Transport to enable her to get out and about without the expense of taxis.

Debbie was then contacted about blind tennis and she plucked up the courage to attend the taster sessions in Belfast and has never look back.

“It was amazing,” she smiled.

“You’re categorised according to your sight and I was B2, so the second worst after B1.”

Debbie excelled and last year, she even qualified for the world championships.

“Me, that said she would never do a ball game again,” she laughed.

She has also now started to take part in the Antrim park run with the help of a guide.

Over the years, Debbie’s sensory support worker had mentioned the possibility of a guide dog to her a few times.

“I’ve always had small dogs, I didn’t know if I could cope and I was worried about people’s perceptions of me because I would have to do the long cane training first.

“Something clicked one day and a few years ago when my eyesight did deteriorate further I just realised that I was ready and before I knew it, Guide Dogs had given me a start date for my long cane training.

“It was a whirlwind but it was great because it stopped me walking into people or tripping over things in shops.”

Debbie progressed well and about five months later, she was astounded to receive a call telling her that they may have matched her with a suitable dog.

“I know there’s a long waiting list and I was sort of resigned to the fact that it could be a couple of years so I couldn’t believe it,” Debbie continued.

“I was becoming quite adventurous with the cane, going to Belfast and so on.”

Guide Dogs NI came out to Debbie’s home with two dogs and after a few checks on her walking speed, Frizz was produced.

“We had a quick walk around the estate and later that day they phoned to ask if I would like her to be my guide dog.

“I was delighted, I just had this feeling with her and when we introduced her to Rosie, my Shih-Tzu they got on great.

“We started training then and it really was intense, every day for a month.

“Guide dogs work on straight lines for the way they walk and go up or down kerbs or round corners.

“There were commands to learn and it was mentally exhausting.

“She even has her food specifically weighed out and responds to a whistle.

“I also had to ensure she didn’t look for food if we were out and I had to boost my confidence to say to people not to pet her as it can be dangerous for her to get distracted while working.”

Debbie is passionate about Guide Dogs and believes that everyone should be educated about what they do.

“I can’t believe how our politicians are allowing funding to be lost.

“The post at Blind Disability Sport is gone, benefits are not going up in line with inflation, South Antrim Community Transport is not getting the same funding as before.

“These people are lining their own pockets while the rest of us, people with disabilities or mental health problems, are suffering.

“Having Frizz has been a life changer for me.

“I can go down to the supermarket now and get what I need and the staff there will also help me and they will deliver my shopping later.

“I’m nervous of slipping in the shower and every morning, she lies on the landing waiting on me, it’s like she’s watching over me.

“I’d like to thank everyone at Guide Dogs for all the wonderful hard work they do.

“I’d encourage everyone to support them in any way they can.

“They are helping to change the lives of people like me.”