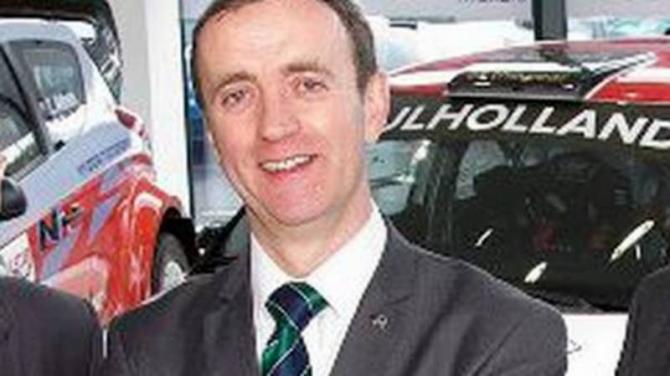 RANDALSTOWN car dealer and rally fanatic John Mulholland will be buried in his racing overalls, his family has revealed, after he passed away at home over the weekend.

The 55-year-old died on Saturday morning following a diagnosis of kidney cancer 14 months ago. He had spent several months in hospital prior to his death.

Mr Mulholland is survived by his wife Alicia, daughters Alicia, Shona and Anna and son Johnnie.

He started rally driving at the age of 19 and will be buried in his favourite racing overalls. Johnnie (21) is also a rally driver.

Following his diagnosis, Mr Mulholland spearheaded a major fundraising drive through his company, which has showrooms in Randalstown and Campsie, with a plan to donate £40,000 by the end of 2019 to the Friends of the Cancer Centre charity.

It is understood that the family will continue to fundraise in his memory with hopes that they will well exceed the initial target.

Announcing the local man’s death on the company’s social media pages, a spokesperson for John Mulholland Motors described Mr Mulholland as ‘A gentleman. A husband. A Father.’