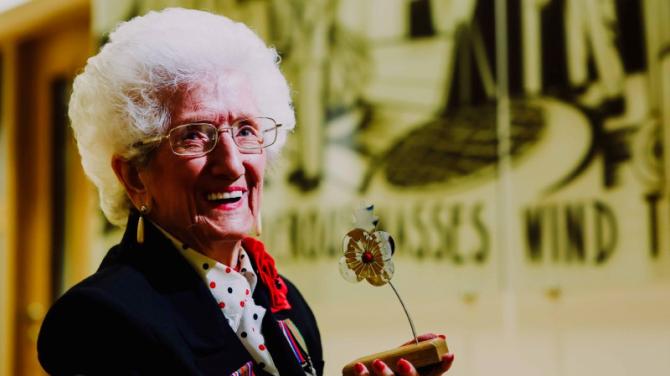 ANTRIM’S surviving World War Two veterans have been honoured at a special ceremony in the borough, where they were presented with specially-commissioned silver poppies.

Three months ago, a Notice of Motion on the subject was brought before a full meeting of Antrim and Newtownabbey Borough Council.

Proposed by DUP councillor Paul Dunlop and seconded by party colleague Alison Bennington, the Motion called for all surviving veterans of WW2, including those in the Merchant Navy, resident in the Borough to be presented with a commemorative Poppy of Remembrance to ‘mark their service in the fight against Fascism and Nazism’.

At Mossley Mill last week, current serving members of the Army, Navy and Air Force and representatives of the Royal British Legion were present at a special ceremony, which also featured the Courtyard Community Choir and an afternoon tea.

Watched on by their families, seven World War Two Veterans were each presented with a specially commissioned Poppy of Remembrance as a token of the council’s thanks for their contribution in achieving Victory in Europe and restoring peace across many countries.

David McCorkell, Lord Lieutenant of County Antrim and Mayor John Smyth welcomed all the visitors and dignitaries to the ceremony.

Mr McCorkell noted that in Northern Ireland, there was no conscription, and therefore all veterans for the region had given their service voluntarily.

Alderman Smyth said that honouring such heroes was important, so that people of all ages had a better understanding of historical events in which local people had played an active part.

He also praised the ‘selfless sacrifice and bravery’ of those who had fallen.

“It is my honour to present this special Poppy to each one of you but as I do so, I am also remembering all of those from our Borough and beyond who were lost in the War, and who are not here with us today,” he said.

“I know each one of you will have memories of fallen comrades and friends and I can assure you - We Will Remember Them both today and in the future.”

The specially commissioned poppies were made by County Down goldsmith Diane Lyness.

One of the biggest cheers of the evening went to Antrim woman Lil Tweedale, who told her story to the Antrim Guardian in 2015.

Lil, who turns 97 in the New Year, played a vital role in the conflict by assisting the RAF’s Photographic Reconnaissance Unit.

“I tried to joined the The Women's Auxiliary Air Force (WAAF) when 1 was 16 but was not allowed,” she said.

“When the war broke out, I knew that when Britain was in trouble, I wanted to help.

“Back in those days, women couldn't have a trade, you had to be a batwoman or go into clerical work. I looked after officers, I polished their shoes and shined their buttons and brought them cups of tea.But I knew I wanted to do more.

“Once we were allowed to have a trade, because I was always interested in pictures and photography, I applied to be a photographer.

“It wasn’t just taking photographs, we had to mix our own chemicals and do all the development work.

“It was hard work. The cameras now are tiny, people even have cameras on their phones, but these were big box cameras on tripods.

“I travelled all over England and Scotland and different camps and I was also in London at the time of the Blitz.

“There was no such thing as Heathrow or Stansted, you flew into Croydon in a Dakota.

“The destruction in London was hard to believe. If you were caught in the Tube during an air raid, you had to stay there.

“There were beds on the platforms and the Women’s Voluntary Service were on hand with tea and coffee.

“Sometimes you had to stay down there for hours. The damage that was cause was desperate.”

As war started to escalate, Lil found that her talents were required by the RAF Aerial Reconnaissance Unit.

“My jobs included loading and unloading films for the cameras. I would bring the magazines to the planes and take out the used and load new ones. Other planes would flying over cities like Berlin or Frankfurt.

“There were about 50 to 100 on every film and once they were developed and dried I had to title each one with numbers. Then they went off and people would use them to identify bombing targets. I didn't really know what I was looking at.”

Despite not being at the coalface fighting, Lil was not shielded from the horrors of war.

Among the other locations where she worked was Belgium, and she told of how she once stood on a train platform in Brussels, watching a train full of Jewish refugees being shunted thrugh to a concentration camp.

“They were clamouring to get out, the train was overcrowded, it was awful to learn what actually happened,” she aid. I often thought of what had happened to hose poor people I saw.”

Her father was a veteran of World War One and she also lost her brother, aged just 45, during the Second world War.

But, like many who witnessed that era, Lil speaks fondly of the camaraderie she enjoyed and the friendships she forged during World War 11.

And of course, she met her late husband.

“Edward was from Huddersfield and he was a sergeant in the photographic section and 1 was a LACW or Leading Air Craft Woman,” she said.

“I worked with girls from the Republic of Ireland and at the end of the week, those who still had money left would help to tide over those who had not.

“I still used to get Christmas cards from those girls until very recently.

“Religion never came into it, we were all there together, added Lil, who was also presented with a special bouquet on the evening.

Another veteran who was honoured at last week’s ceremony was William McGowan, of Castle Park in Antrim.

Originally from Blackburn in Lancashire, William was an Engine Room Artificer, with an in-depth knowledge of all ships engineering equipment.

He worked aboard HMS Belfast and HMS Caroline and enjoyed working aboard American frigates.

“The ship beside Caroline was called the Pegasus and I worked on her too,” he said.

“My mother-in-law didn’t understand a word I said and she was asked where I was working and she said ‘I don’t know, it’s HMS Bejaysus or something like that!”

In 2014 Ex-Royal Navy commander Philip Ball OBE received not only an Arctic Star, but a medal from Russia, the Ushakov Medal, for his service on the Arctic Convoys.

His ship, HMS Victorius, was among those which helped keep supply lines open to the beleaguered Soviet Union.

Those who took part in the maritime missions - which Winston Churchill said were the most dangerous of the war - battled storms, bombers and U-boats to ferry war supplies to Russia as they were fighting the Nazis.

Her family are originally from Nutts Corner and the couple moved to Northern Ireland from England to see out their years.

Speaking of the ceremony, Philip said: “It was a lovely occasion and your mind does flip back to those friends who you made over the years who have passed away or who didn’t make it back.”

Of his wartime memories, one thing that has stayed with Philip is the cold!

“We spent a lot of time on board ships but we made up for it in port, not just boozing, but we saw a lot of amazing places and shared some great times.”

He also spent time in Eglinton as part of the Fleet Air Arm, where he worked on the main carriers for squadron aircraft.

Mr Ball pointed out that the vast majority of surviving veterans in the borough had served in the Navy.

“It’s the fresh air and the rum!” he laughed.