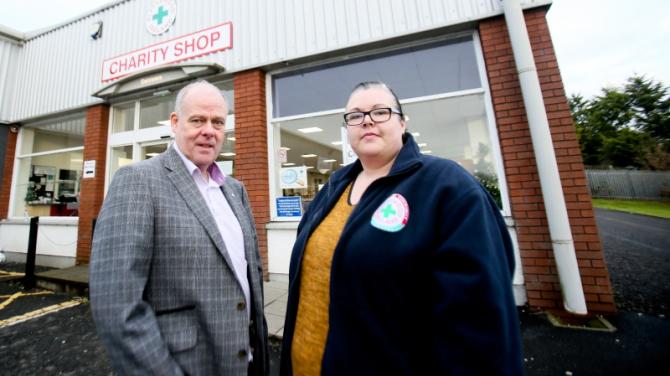 A CHRISTIAN charity shop that helps disadvantaged people in Northern Ireland and Eastern Europe has launched an appeal against a planning decision by Antrim and Newtownabbey Borough Council that would force it to shut down.

The future of the Blythswood Ireland Charity shop on the Greystone Road in Antrim, which sells affordable second-hand furniture to the public and provides vital aid to people in poverty-stricken Eastern Europe, is in jeopardy after the council refused retrospective planning permission for a change of use.

Gary Anderson, CEO of Blythswood Ireland, said the board had unanimously decided to appeal the decision as they were determined to remain open for business to serve the community.

He said: “Our hope is that the Planning Appeals Commission reverse this bitterly disappointing decision.

“We believe passionately that we have a location that works for the local community, works for our charitable aims and works for the council in re-using and recycling preloved furniture and other items.

“We are providing a service of affordable furniture to local people and this centre facilitates the storage and distribution of our annual shoebox appeal which distributes 15,000 shoeboxes full of essential items to people in devastatingly poor areas of Eastern Europe.”

Blythswood Ireland’s store has been serving the Antrim community since January 2017 but on November 13 the council decided to refuse permission for a change of use from the previous business, a car sales showroom which means that the shop will be forced to close down on its present site.

“Our business model is to locate in a position that facilitates easy car parking for the dropping off and picking up of furniture and bulky items and this works successfully in many of our locations including Antrim,” he said.

“We also require a sizeable storage facility beside the shop to restore the furniture and place it for sale.”

The CEO added that the charity was helping the council by recycling thousands of tonnes of material that could have ended up in its civic amenity facility, which is opposite the Blythswood site.

This was one of the reasons why the charity chose this location.

He was speaking as members of Blythswood logistics team was loading up more than 7,700 shoeboxes to be shipped out to Moldova in time for Christmas.

A similar load will be going out to Ukraine later this month.

Since opening in January 2017, the charity has worked in partnership with other local companies such as Dennison’s Engineering which has lent it the use of a forklift truck and additional manpower to help with its annual appeal.

Mr Anderson added: “Our bid to overturn this decision has received a lot of support from local political representatives and from members of the public.

“We would like to tell everyone that we are still open for business and fighting this decision every inch of the way.”