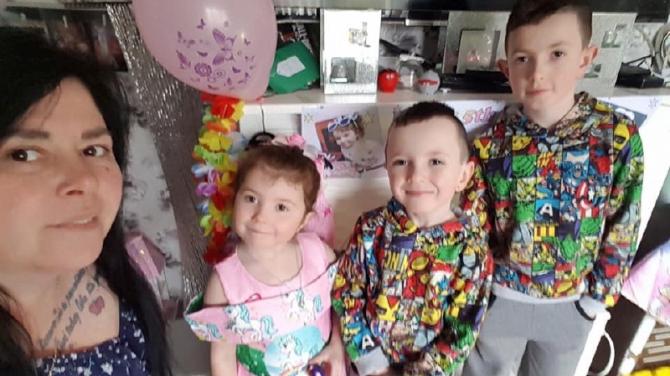 OVER £3,000 has been raised in memory of a young Antrim mum of three who passed away last week just a month before Christmas.

Tragically, her death came just three years after her late husband Stephen passed away, which means their children Corey James, Keegan and Joni are now orphaned.

Devastated by her husband’s death, Sandra (pictured right with her children) moved out of the Springfarm area earlier this year,

Now friends and family have rallied around and have already smashed through the £1,000 barrier set to help raise funds for the three children, with over £3,200 having been raised at the time the Antrim Guardian went to press last night.

“Anyone who knew her loved the bones of her.

“Unfortunately, and to much devastation, Sandra has passed away.

“Her three young children have also been left as orphans as their father has also passed away.

“Anyone who knew her knew she just lived for her kids.

“A small donation would be greatly appreciated to help them through the next stage of their little lives.”

Writing on the Go Fund Me page, Elaine added: “When someone passes, we only hear great stories about the deceased but in Sandra’s case there only were great stories.

“Selfless to a fault, she never put herself second - always fifth or sixth. If her friends needed someone, Sandra was the first there and the last to leave.

“Sandra never got it easy but your problems were always more important to her. Widowed with three young children, she fought tirelessly to provide more love than even two parents could hope to give their children.

“Sadly and suddenly Sandra passed on the 28th November leaving her family and friends numb to the massive space that she has left behind but to her three young children, who are now orphaned, life will never be the same.

“This page has been set up to give a little back to three young children who find themselves without both parents and their little worlds shattered. Just a small donation would be greatly appreciated to help care for them coming up to the festive season.”

Sandra will be laid to rest in Belmont Cemetery in Antrim this Wednesday following a service at Roselawn Crematorium in Belfast.