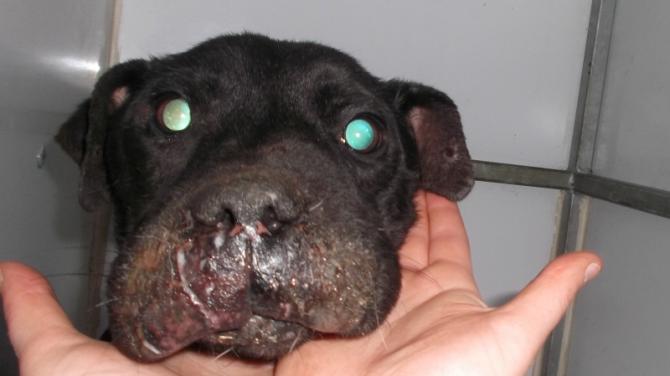 AN Antrim man has been handed a four-month suspended prison sentence after a judge blasted the ‘suffering’ endured by dogs under his care.

He was further charged with failing to comply with an improvement notice on the same date and failing to take reasonable steps to ensure the needs of four hound-type dogs were met but the finding was deemed ‘not applicable’ on the latter of these charges.

Milliken was also ordered to pay costs of £349 and was disqualified from keeping animals for 10 years.

Legal counsel for Antrim and Newtownabbey Borough Council confirmed that a complaint had been received about dog fighting and living conditions relating to the animals at Ballyutoag Hill in Crumlin.

When a visit was made to the property, 13 dogs were found across three pens.

In one of them, she said there was a terrier type dog with a ‘wound to its lip’ while a second pen, which contained seven dogs who were ‘okay’, was ‘dirty with faeces’.

In the third pen, there was a terrier and four hounds which were ‘underweight’ and one had a ‘swollen muzzle with blood on it’.

The court heard that a vet attended and determined that the two terriers and two of the hounds should be seized.

She said that when a return visit was made to the property, a notice which had been attached to the door had been removed.

“On a third visit, there was a strong smell of urine and two dogs were running loose,” she said, explaining that one of them was ‘pot bellied with swollen glands’ while the other was underweight.

NO WATER OR FOOD

“There was no water or food available to them and when they were given water, one of them drank so much that it vomited.”

The dogs were seized, she said, adding that Milliken provided no response to follow-up questions which were sent to him.

Addressing what was being sought by the Council she outlined that there were ’substantial vet and kennelling costs’ as well as legal and court costs, which altogether came to almost £5,900.

“A disqualification order is being sought under all the headings,” she continued, providing a draft copy to the court and adding that the length of the ban would be at the ‘discretion of the court’.

“The Council would seek a lengthy disqualification as this is a very serious matter.

“The third order would be an order for deprivation. There are seven other dogs which have been seized but have not been voluntarily disposed of by the defendant.”

Defence Counsel for Milliken accepted that he had a previous conviction for a separate matter in Antrim Crown Court dating from 2009, however, he declined to refer to the exact nature of this in open court.

He did, however, confirm that it was a matter which his client had pleaded guilty to and received a ‘swingeing’ sentence of three years in prison and three years on Probation.

“He served 18 months and was subject to Probation on his release,” defence clarified. “During those three years he did not come to the attention of police.

“Given the offence for which he pleaded guilty, one could wonder how he maintained a relationship with his wife, but he did.

“They have three children, one of whom was conceived after his release but that relationship has now ended. The stability in his life was his wife and kids.

“He has always had a keen interest in dogs and he says himself that he is disgusted by these offences.”

Interjecting, District Judge Oonagh Mullan described photos of the animals which were presented to the court as ‘horrendous’ before she lamented the ‘suffering they must have undergone and the conditions they were living with’.

Accepting what she had said, the defence conceded that it was ‘maybe good fortune more than anything’ that the animals had not required to be euthanised.

He went on to explain that his client had kept dogs for many years and stressed the loss of stability in his life after the breakdown of his marriage.

“He told Probation he had been bingeing on drugs,” the lawyer said. “It is evident that he is very forthright in his disclosures with Probation.

“He is not making excuses. The courts, now more than ever, are horrified by neglect of animals but this a different case to positive cruelty like dog fighting or wilfully choosing not to feed or care for them.”

Interrupting again, District Judge Mullan fumed: “How can the state they were found in be anything other than wilful neglect?”

The defence emphasised his belief that ‘context is everything’, stressing that Milliken had been an animal lover for years.

“His personal circumstances collapsed around him and the last thing he was thinking about was the care of the animals,” he said.

“I know that the court may be considering a custodial disposal but the thought of going back to prison terrifies him.

“It is accepted that there has to be a ban on keeping animals but I take issue with a lifetime ban.

“There may be further proceedings regarding the seven other dogs seized.

“As for the phenomenal costs, he is a trained butcher but has found it difficult to get employment and the court may have to be wary of imposing a fine that is effectively imprisonment through the back door if it is not in keeping with his means.”

The defence also accepted that a previous suspended sentence ‘may well be an issue’ but reiterated that Milliken had not breached his previous Probation.

“Given his current personal circumstances, there is a strong push for assistance,” defence continued.

“A ban on keeping animals would ensure that this would not happen again.

“This was not positive abuse or a case where he just turned a blind eye. The dogs were penned away from his home address.”

District Judge Mullan countered this by stating that he would have ‘seen it every day’ and stressed that the ‘obligation was on him to attend with them’.

“I’m not convinced about Probation or community service,” she continued. “This was in 2017, two and a half years ago now.

“If there are difficulties in his life because of his marriage then there are other services he can avail of to address those.

“I am struggling not to impose immediate custody,” she warned.

After rising to consider her options, District Judge Mullan suspended the operation of the four-month sentences for three years and imposed the ban and order for costs.