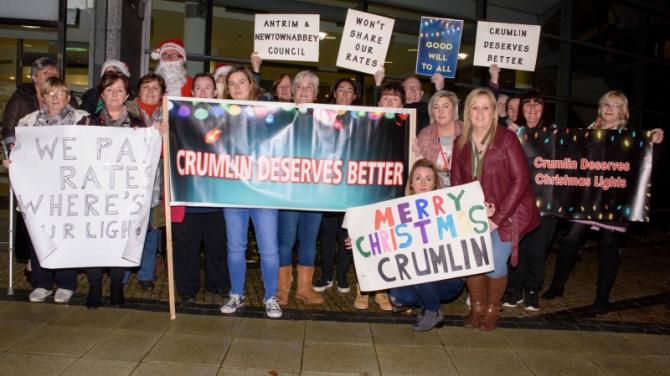 CRUMLIN reps were last week accused of being ‘asleep at the wheel’ in not securing Christmas street lighting for the town in good time.

The debate was sparked following a full monthly council meeting of Antrim and Newtownabbey Borough Council, when Sinn Fein councillor Anne Marie Logue moved: “That this Council authorises the appropriate officers to source, on loan from other councils, sufficient Christmas Lights to ensure that the Main Street in Crumlin is decorated for Christmas 2019.

“Officers are also authorised to extend the relevant contract for installation to include Crumlin.”

This was backed by her party colleague Michael Goodman.

The row erupted - again - several weeks ago when Crumlin residents, who believed that Christmas lights had been reinstated to the area after a long-running battle with the council, noticed that none had been erected, just weeks before an official ‘switch-on’ event.

There was more anger later when a living tree was planted in the town, which residents branded ‘too small’, although it has since been embellished with a decorated frame.

A packed - and passionate - meeting was held in Crumlin two weeks ago, where only Sinn Féin’s Anne Marie Logue, the Deputy Mayor, was in attendance, out of the ward’s five councillors.

She said that she had been told by council officers that no extra lights were now available.

There was uproar in November 2017, when council agreed to reduce the future budget for Christmas provision from £460,000 to £230,000, which slashed the number of Christmas Tree Switch On Ceremonies across the borough from 22 to four.

2018 events were held in Antrim, Randalstown, Glengormley and Ballyclare, described as the main ‘towns’ in the borough.

Angry residents, keen to point out census figures which showed that Crumlin was also designated as a town, soon mobilised and the Crumlin Deserves Better Committee was formed by a group of local women.

Children got into the act too, sending letters and pictures to local councillors demanding to know why Christmas had been ‘cancelled’.

That in turn led to extraordinary scenes in the council chamber with Alliance councillor Tom Campbell publicly condemning what he called the ‘nefarious campaign’.

The row rapidly escalated, with some residents suggesting that the decision to plunge Crumlin into darkness was motivated by religion - something the council has consistently rejected.

There seemed to be light at the end of the tunnel, when, in June 2019 the Council agreed to increase the number of Christmas trees and switch-on events across the Borough from four to seven to ensure that every District Electoral Area is included.

A report to the council, following ‘feedback’ and in a bid to address the concerns of residents, proposed that one Christmas tree be located in each District Electoral Area, with trees located within the grounds of the Dunanney Centre and Crumlin Leisure Centre together with switch-on ceremonies.

It was also proposed that a switch-on ceremony be held at Mossley Mill to facilitate the Threemilewater DEA.

In addition to the provision of a tree and lighting at each location, it was agreed that a ceremony should take place at the three sites at a cost of around £10,000 per area.

However, council officers have since noted that no further discussion in relation to additional festive lighting took place at this meeting.

It was noted that Crumlin was a location that had previously had festive lighting linked to connection boxes.

However, the council has clarified that no decision was made regarding further investment in festive street lighting by those in attendance.

At the meeting last week, which was preceded by a picket by Crumlin residents, with one dressed as Santa and another as an elf, Councillor Logue said that traders and residents paid rates and should be treated the same as residents in other towns.

She said that she had been initially told that the lights were in storage, then unavailable, by council officers.

Councillor Logue read a letter from a constituent with two young children, one a survivor of Leukemia, who said that his five-year-old daughter, who finished her treatment in August, had been looking forward to spending her first Christmas at home in three years with her family.

The father said that ‘a tree and lights switch-on’ had left the child ‘so excited’ and would help draw a line under the trauma that the family had suffered.”

The man asked councillors to ‘set aside political, religious and personal differences’ to ensure that Crumlin could be lit up.

Councillor Logue added that the council-funded Town Team were also working with traders to address the situation, saying that some had reported a drop in trade due to a lack of festive lighting.

Her party colleague Michael Goodman said that residents were ‘upset’ and said that he hoped that the situation was ‘an oversight’ and had not been intentional.

UUP rep Danny Kinahan said that he was happy to support the motion, but his party colleague Robert Foster said that Councillors Logue and Goodman ‘must have been asleep at the wheel’ by not realising that lights were not included in the new provision, and waiting until November to take action, as he put it ‘in the mouth of Christmas’.

“I don’t understand it!” he exclaimed.

Alderman Tom Campbell said that his party colleague Victoria McCauley had assured him that the motion was ‘one worthy of supporting’ and asked for clarity on what had been provided for the town in June, which was again reiterated by council Chief Executive Jacqui Dixon.

Crumlin rep Thomas Burns made an impassioned plea to members, acknowledging that there had been a misunderstanding and that many thought that the provision for the seven DEAs meant that all would have street lighting as well as a tree and family event.

“We thought there would be town lights as well, but we now know that’s not really the case.”

He again asked what the criteria was in removing Crumlin from the list of main towns in the borough.

“We have a Town Team, a Leisure Centre, a big Tesco and all the other things you have in a town.

“It is left for us (councillors) to explain to residents why we are not accepted as a town and others are, and it is difficult to have to try and explain this.”

Adding that Christmas was ‘a magical’ time of year for families and communities, he said: “No one wants a whole fight about lights and the Crumlin people being up in arms, we should all be enjoying Christmas together.”

UUP group leader Mark Cosgrove said he took issue with a call to ‘put politics to one side’.

He said that he had backed a previous proposal for additional council support for Crumlin over Christmas, which had lost by one vote.

Alderman Cosgrove stressed that the decision to cut Christmas funding was not political or sectarian, but had been taken in a bid to reduce the original sum of £500,000 to a lower figure.

He said that he particularly wanted to stress this point to Crumlin residents and to ‘keep politics out of the chamber’.

This was echoed by DUP group leader Phillip Brett, who said he was also happy to support the motion.

He said that Sinn Féin reps had misled their constituents in claiming ‘a great victory’ and encouraging a slogan of ‘Antrim and Newtownabbey Borough Council having stolen Christmas’.

He added that any attempts to blame members or council officers was ‘disgraceful’ and that a phone-call ‘the first time round’ could have alleviated the situation.

Mr Brett said that Alderman Burns’ comments ‘bore no relevance to the debate’ and that certain elements had ‘whipped up’ false claims of discrimination and sectarianism.

“It didn’t have to get to this stage,” he said.

Rosie Kinnear of Sinn Fein proposed an amendment, which was backed, adding that in future, Crumlin be considered as one of the main towns in the borough and treated in the same fashion as Antrim, Randalstown, Ballyclare and Glengormley.

The motion was carried, unanimously and Crumlin residents in the public gallery (pictured below protesting ahead of the meeting) thanked the members.