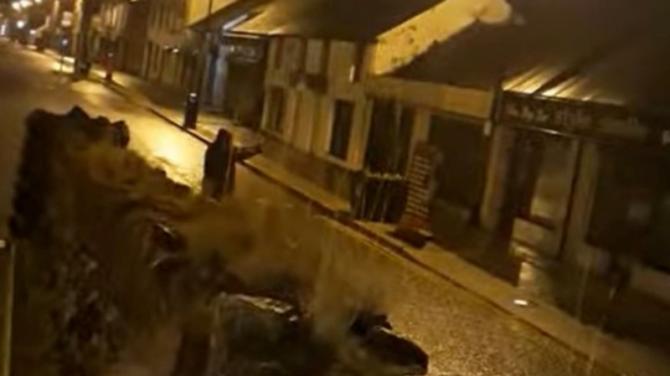 SINISTER footage has emerged of the gun attack in Crumlin in the early hours of last Tuesday morning (November 26).

The brief 16-second clip appeared on YouTube on Thursday and by last night (Monday) it had been watched over 32,000 times.

The footage shows a man wearing a dark jacket and light trousers, his features covered by a white mask, walking close to the town’s famous clock tower.

It was 1.40am and a light drizzle was falling as he strides confidently down the middle of the road.

He approaches the Style & Smile salon on Main Street before pausing and looking back towards the camera surveying the road for oncoming traffic.

When he realises the coast is clear, a handgun is produced and he opens fire.

Ten loud shots then ring out in quick succession before the disturbing footage abruptly ends.

The film was posted by ‘Irish Revolution’, who have 42 subscribers on the online platform - and it appears to be the only file they have shared.

By Monday it had accumulated 61 likes and 18 dislikes.

It makes a specific allegation about why the shooting took place, though that has been rejected by one viewer who said those responsible should be ‘ashamed’.

Detectives leading the investigation confirmed that there were no reports of any injuries.

“Enquiries are under way to establish a motive for the incident and anyone with any information which could assist detectives is asked to contact police at Antrim on 101 quoting reference number 79 26/11/19,” said a spokesperson.

“Alternatively, information can also be provided to the independent charity Crimestoppers on 0800 555 111 which is 100 per cent anonymous and gives people the power to speak up and stop crime.”

Alliance MLA John Blair said the incident will be ‘worrying’ for traders and residents.

“This shooting incident will cause concern to local traders who are working hard in the run-up to Christmas providing jobs and supporting the local economy,” Mr Blair said.

“Crumlin residents are angry that guns have been brought on to the streets and I would condemn whoever was responsible in the strongest possible terms.

“I would urge anyone with information to pass it to the police.”

Sinn Fein Assemblyman Declan Kearney said the residents of Crumlin were ‘in shock’.

“Whilst no one was injured during the incident, it has been met with shock and disbelief by the local community,” he said.

“I unreservedly condemn the use of firearms on our streets.

“This incident has served only to instill fear in the local community and has caused disruption to residents during the follow-up police operation.

“I appeal to anyone with information concerning this incident to assist the PSNI in their investigation.”