'Unsung hero' honoured for 26 years of caring for others 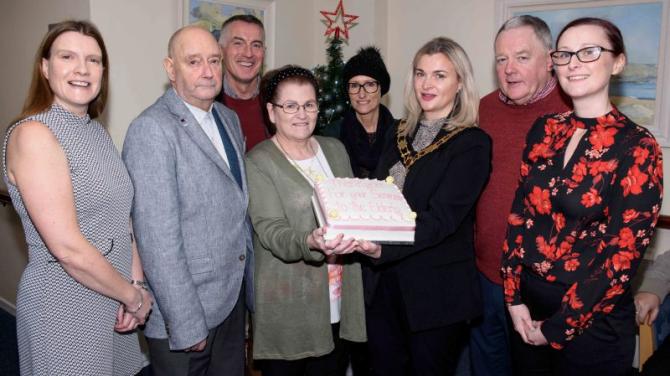 A SELFLESS Crumlin woman has been honoured for more than 25 years of service to the local community.

Shirley Fyffe-McFadden is scheme manager at The Whins in the town and has been working at the facility for more than a quarter of a century.

The scheme, run by Alpha housing, currently has 36 tenants in flats and 15 in bungalows, just off the Lurgan Road.

Belfast-born Shirley was inspired to become a nurse following a visit to hospital as a young teenager and she got her first role as a nursing assistant in 1969.

A special day of celebration was held in The Whins last week - a complete surprise to Shirley- and among the wellwishers were her very first tenants in The Whins.

Shirley helps organise many events for the residents, including coffee mornings, craft groups, cinema nights and even regular fish and chip takeaways!

She is also a big animal lover, with a Golden Retriever at home and several cats, and she and her daughter are both volunteers at the Mid Antrim Animal Sanctuary.

Councillor Logue said: “I was delighted to have had the opportunity as Deputy Mayor to host and recognise over 25 years of dedicated service by Shirley McFadden the manager at the Whins.

“Shirley goes over and above her role to care for residents at the Whins.

“I’ve heard so many heart warming stories about Shirley so this was a great opportunity for all of us and especially the residents to acknowledge her dedication.

“Shirley is an unsung hero and a very special lady

“It was a wonderful surprise for Shirley and we all had a brilliant day.

“Last but not least all the fantastic residents at the Whins, who kept the surprise very quiet for the past few months!”

Just a week later, Alpha’s Christmas Fayre took place in the Whins, with over £1,800 raised for Air Ambulance NI.

Tenants, scheme staff and friends of Alpha travelled from far and wide to support the event.