Make it Magical with Women's Aid 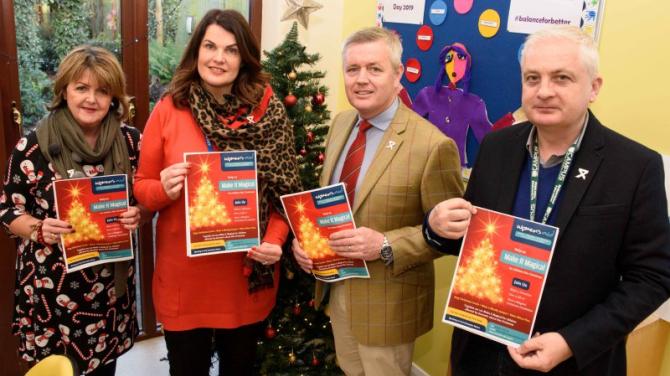 LOCAL people have been asked to show their support for Women’s Aid ABCLN this Christmas as the charity launched its new appeal last week.

Make it Magical builds on the ongoing Make it Better appeal which focuses on working with children in The Cornerstone at Women’s Aid’s Fountain Street facility in Antrim.

The charity firmly believes that every child deserves a magical Christmas and is encouraging everybody to make a donation, give a gift or host a fundraising event to show their support.

Startling figures reveal that one in four women will experience domestic abuse in their lifetime and that police respond to one incident of domestic abuse every 17 minutes across Northern Ireland.

Terrifyingly, in 90 per cent of incidents, children or young people are in the same or next room.

With this in mind, Arlene Creighton (Communications, events and fundraising for Women’s Aid ABCLN) and the team were delighted to be successful in their entry to win pro bono help from Creative Media to work on this new campaign.

Arlene was new to her role last Christmas and while Women’s Aid was thrilled to receive gifts to distribute through Mission Christmas, she felt they could start to build their own mission in house.

Working with students from Ulster University and Queen’s, the idea was mooted to film how Christmas would appear through the eyes of a child affected by domestic violence.

The short video was filmed here in Antrim and shows a mother and daughter decorating the tree before the young girl writes her Christmas list and enjoys hot chocolate.

This happy, festive scene is shattered, however, as suddenly, an advent calendar is stamped on the floor and a shadowy figure tumbles the tree while the child cowers behind a cushion in her room.

Women’s Aid brings the young girl the much-wished for unicorn toy that was in her letter to Santa, showing that assistance from the charity really can be the only hope some children have of keeping the magic of Christmas alive in the darkest of circumstances.

“It was an incredible experience to film this and we are so grateful to Conor Johnston from Creative Media, the students and everyone who helped us put this together,” Arlene Creighton told the Antrim Guardian at the launch.

“The video shows that secondary violence which also exists.

“In it, the advent calendar is stamped on and the tree is knocked over but there’s the unspoken threat of what else could happen.

“He has the control to destroy everything about Christmas and while it was those objects which were broken, it is clear that the woman is next.

“We are issuing a number of calls to action in asking people to make a donation, give a gift or organise a magical fundraiser.

“We also have raffle tickets available to purchase or that people can sell on our behalf.

“On top of this, we would ask that everyone please share this across social media and really help get this campaign out there.”