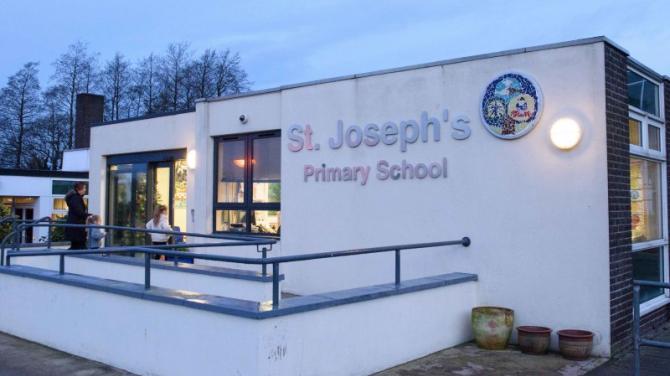 FESTIVE spirit has won out at St Joseph’s Primary School in Antrim despite a break in which saw cabling cut and stolen.

It is understood that entry was gained to the school grounds and roof between 8.30pm and 11pm on December 14.

During the break in, the cabling for the electrics, computer systems, phones CCTV and alarms was cut.

Notifying parents of what had happened, Principal, Mrs Treacy praised the efforts of the Education Authority in working to repair the damage.

In the wake of the sickening crime, she said: “They have managed to get some lights on in P1 and the office and have been able to get the canteen up and running.

At that point, however, it appeared that given the earliest date new cable would arrive for the rest of the school and the time needed by the electrical team to do the connections, the school would have to remain closed until Friday past.

“This is as disappointing for us, as it is for you but we will not let these people ruin Christmas for our children,” Mrs Treacy continued.

Plans were put in place for the school’s carol service to go ahead as planned in the church last Tuesday and the big breakfast event also went ahead last Wednesday in the school canteen.

New arrangements have also been put in place for the flu vaccination to be completed on Tuesday, January 7 after the children return in the New Year.

Mrs Treacy thanked parents, carers and friends of the school for their support and attendance at the different events.

Welcoming everyone in the community who offered their support, she said: “It was an important time to pull together as a school community and to give our children the best experiences for this special season.

Police have also appealed for information about the incident.

Describing it as a ‘sophisticated attack’, PSNI Constable Jack said: “The cabling will cost a substantial amount to replace and has also caused major disruption to the running of the school as classes have had to be cancelled for at least four days.

“I would ask anyone who noticed any suspicious activity in the area at this time to contact officers in Antrim.