Half a century in the 'Farmer's Lodge' 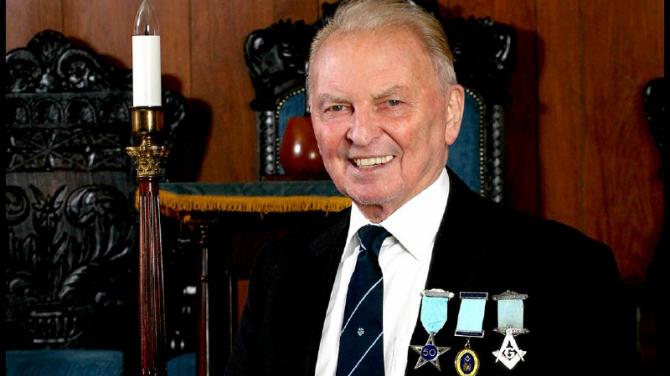 He was recently presented with the Jewel to mark 50 years of membership.

He is also a member of Polytechnic Masonic Lodge 756, City of Belfast, in the province of Down.

When Bobby joined Lodge 56 it was known as ‘The Farmer’s Lodge’ owing to the number of its members who worked the land.

Its warrant was issued in 1842 - ironically when the famine in Ireland was at its height.

Polytechnic 756 has also its own claim to an extra title - ‘The Technical Teachers’ Lodge’.

That is something close to Bobby’s heart. After serving on the high seas, he shared his knowledge in the classroom lecturing on engineering.

Latterly, he has written about that passion - as well as his love for travel and ‘old Antrim’ - in a series of excellent books

Polytechnic was formed in 1952 by teachers from that great citadel of Engineering knowledge, the College of Technology in Belfast.

Among those early members was one David H Alexander, later to become Rt Wor Bro Alexander, principal there from 1935 until his retirement in 1967.

Bobby is ‘immensely proud’ of his long Masonic journey - and has fond memories of the many people he met along the way.

“It has been amazing the number of brethren I have met, many of them abroad during my travels to far away places with sweet sounding names!” he said.

“Recently I met two American brethren - a father and a son - at an informal meeting of Free Masons in the States.

“The son worked for a United Nations initiative at the South Pole and he told me that his ambition was to see a Masonic Lodge founded there.”

Bobby added that he was keen to challenge preconceptions about the Masons.

“A common mistake among critics of the Order comes when they become hopelessly confused in the mistaken belief that it has something to do with one’s religion,” he said.

“Nothing could be further from the truth.

“We are a charitable organisation based on morality.

“I often think it is a pity that some of our leaders in government are, it would seem, outside the thinking of the Fraternity of the Masonic Order.”