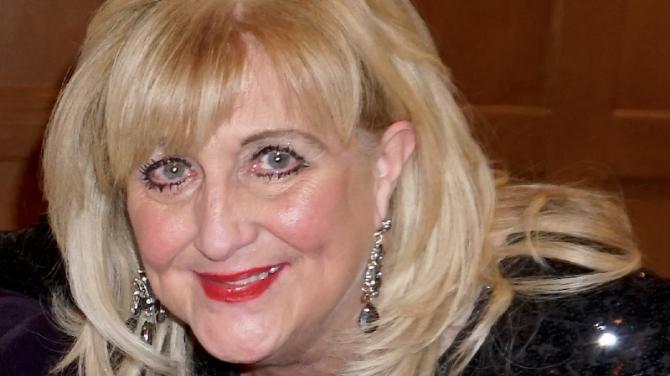 SHE’S probably best known for her work with the Rotary Club of Antrim and as a staff member at the Northern Bank in the town for many years, but Heather Montgomery (née Johnston) is a country girl at heart.

Now living near the village of Connor, she was brought up in Ballylinney on the outskirts of Ballyclare.

The family had arable and livestock farming interests at Four Mile Burn and Posy Hill Road near Doagh.

With three sisters and two brothers, things were never quiet in the Johnston household!

“At the time, I didn’t realise what a perfect and innocent childhood we were enjoying,” said Heather.

“We had no worries at all, money was never mentioned, my father was probably the most chilled out man alive and my mother baked and cooked every day, she was very big on getting us all educated.

“Car loads full of children would arrive unannounced, there was always a pot of stew on.

“We played rounders, hid in the hayshed, and danced on the top of the wall of the cattle crush, pretending we were ballerinas - there was no health and safety in those days.”

On the farm there were ‘pigs, sheep, cattle, crops, potatoes, barley and hay to see to’.

Heather added: “We all worked as a team.

“When it was time for the potato picking, people from Muckamore Hospital would come down to help.

“The craic and the money were great and we all used to have a big dinner together.

The local woman showed off her entrepreneurial spirit from a young age.

“If there was lamb that was delicate or not doing well, if you reared it, you got to keep it,” she explained.

“Then I would sell it and buy two more lambs!

“We all milked the cows, we didn’t get a machine until the late 70s or early 80s.

“We also had goats and I loved getting the homework done, getting out of my school clothes and milking the goats.”

“He loved his horses, he rode since he was five, and we all followed on, there were no formal riding lessons, you just got up and got on with it,” she told the Guardian.

“He had a pony and trap and there was a donkey we would halter up and ride up and down the lane.”

Her father’s mother, Heather’s paternal grandmother, was also a huge source of inspiration.

“She was a feisty lady,” the former bank official recalled.

“Her mother, father and two sisters died and she ran a farm on her own.

“She ended up marrying one of her farm workers.

“She would take a pony and trap into Belfast on her own, for violin lessons or trips to the market.”

According to Heather, her grandmother was ‘definitely ahead of her time and very into women’s rights’.

“My mother would say ‘you deal with your own battles, I don’t have time to do it for you’, and ‘you fall down seven times, you get up eight’.

“And of course, treat other people the way you wish to be treated.”

There is little doubt that life has changed beyond all recognition since those times.

Heather continued: “We had about ten turkeys at Christmas and we would all sit around the table plucking them.

“My sister still runs one of the farms, and the other was sold.

“We had no mobile phones, if something happened on the farm no one was coming for you.

“But everyone pitched in, when it was time to gather in the hay there was about 20 of us and we’d all have a big game of rounders once the field was cleared.

“Now it’s all done by machinery, every second counts, time is money.

“People would just call by the house and tell a story or get a fiddle out and start playing.

“The TV was never on, it was black and white and had two channels.

“The fire was always on and it was a big old cold farmhouse, the minute you moved away from the fire it was like being in the Arctic!

“If anyone on any of the neighbouring farms was sick, we all did their work for them and vice versa.

“My mother would send food round all the neighbours too.

“If someone was getting married we would tie up the gates and tie them to a tree or a lorry and drive them around!”

“School was okay, but it was just a means to an end for me,” she said.

“I went on to Antrim Tech and did business, it felt like I spent my whole life doing exams.

“I worked as a ground hostess for British Airways, for Northern Bank on the cash desk in Antrim and then for corporate clients in Carrickfergus, and later in life I was lucky enough to be able to re-train as a teacher for teenagers with special education needs.”

Heather met her husband - ‘a real townie’ - at a Christmas party and the couple have two daughters.

One lives in Canada and her other daughter who lives closer to home, also works as a special needs teacher and has inherited her mother’s love of the country life.

“I dragged my husband out to the sticks,” Heather laughed.

“He’s used to it now, we are very rural and live down a lane with no neighbours.

“I also have a granddaughter, who I love to spend time with.”

Heather got into Antrim Rotary Club after it was recommended to her by a physiotherapist.

“I’d been 20 years in the bank and my physio thought it would suit me down to the ground,” she explained.

“People think that Rotary is for rich old men, but it’s not like that at all.

“We are not a charity but we are a service and we deliver thousands of pounds locally.

“In recent weeks we have handed out money to Lough Neagh Rescue and Home-Start, two causes which are very close to our hearts.

“Yes, we do support charities overseas, but supporting local good causes is also very important to us.

“I had such a great upbringing. Home-Start does brilliant work for families who are finding things tough.

“Equally, in my work with young people with special needs, some of the stories are heartbreaking.

“There are lots of people locally who are really in need and it is great to be able to help them as well as supporting people abroad as well.

“Rotary is a great organisation to be a part of.”

With that Heather, who is currently President-Elect and will be President in 2020, ably assisted by local undertaker Geoff Irons as her deputy, was off to the annual Christmas lunch.

“There was no such thing as being bored in my day, so I think that’s why I’m always keeping busy,” she laughed.