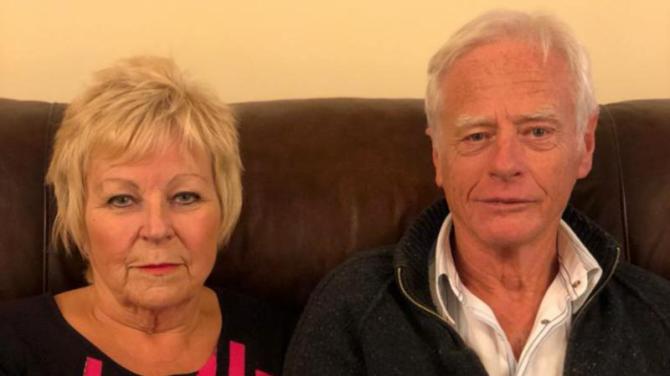 THE family of murdered Crumlin teacher Robert Flowerday have paid tribute to their brother, as it emerged that they plan to challenge sentencing laws in the wake of his death.

Retired property developer, Alan Flowerday has vowed to do what he possibly can in order to see killer Michael Gerard Owens spend the rest of his natural life in prison.

At Belfast Crown Court the judge passed down a 16 and a half year sentence to the 35-year-old Glenavy man, a sentence which the Flowerday family and friends feel was ‘simply just too lenient.’

Robert was killed in a frenzied attack which lasted several hours at his home on January 28, 2018.

Alan, who had last seen Robert on Boxing Day, said his brother was ‘in great form’ playing on the floor with Alan’s grandchildren.

On January 29, Alan received a call from a friend from Crumlin to say they had seen police tape across the gate at Robert’s house.

He made calls to the rest of the family as he and his wife drove to Crumlin, to determine if their siblings Fred, Pat or Edward knew anything.

No one had any information.

When Alan and his wife, Heather arrived at the farmhouse known as ‘Glenside’ on the Mill Road, they were met with the shocking words from the police officer: “This is a crime scene, you cannot enter and all I can tell you is that Mr Flowerday is deceased.’

But that was only the beginning of their nightmare.

It was ten days before they were even allowed into the 200-year-old house when they were met with ‘a scene from a horror film’.

“We were told even the police said they had never seen anything quite like it,” Alan said.

“There was blood splattered and smears all over the walls in the hall and kitchen.

“Robert would go down to the Glen and cut up fallen trees to give as firewood to ‘the needy’ but leave tools like a hatchet, axe and claw hammer in the conservatory - which Owens used to kill him.”

“He was a teacher at Antrim Grammar for 15 years and laterally not particularly happy teaching in a school situation.” he said.

“He felt frustrated with school life and found greater satisfaction tutoring on a one to one basis.

“It was a big step for him to leave teaching at the school and tutor because he did not deal well with change.

“He lived in the family home all his life, he rarely changed his car.

“Some thought him odd but those who knew him saw him as the kind, thoughtful, caring individual he was.”

“He did not like squandering money but he would have given more away.

“He liked to give away fruit and flowers from his garden.

“Money to him was to be saved and most certainly not spent foolishly on himself.”

“I suppose we all kind of made fun of him a little. He, himself had a great sense of humour.

“Robert had a wonderful ability to mimic accents and people!

“He would often mimic Alan’s wife and did a great impersonation of Colombo.”

Owens had broken into Robert’s house just weeks before the murder and stole £100.

“We were totally unaware of that,” said Alan.

“I knew later that Robert lodged quite a lot of money in the bank after that break in.

“I don’t believe Robert was in the house when it was robbed before but Owens felt there was more money there when he saw all the filing cabinets.”

“Robert had amassed an enormous amount of tutoring material over the years and it was all methodically filed.”

“We heard that Owens supposedly had a list of vulnerable people living on their own and he would target them and rob them in their homes.”

Alan said that Owens had only apologised for his actions through his legal team 20 months after the crime but the family believe that he was never sorry for what he had done.

“We have never been given any real apologies by Owens so I feel he was never sorry for what he did, not truly” he said .

“There was no excuse at the brutality of Robert’s murder,” he said.

“Owens could have spent hours killing Robert. He seemed to have so much hatred for Robert.

“The viciousness of the attack looked as if he really despised him. Maybe Robert was such an easy touch.

“Robert, though tall and lean was a strong man.

“He must have fought hard for his life but with the severe head wounds he sustained he had no chance.

“The sheer brutality in which he was killed is just awful.

“Robert had been taken by surprise and had been clubbed over the head first to stun him.

“Every kitchen cabinet door was pulled off. There was blood everywhere.

“Owens eventually dragged the body into the dining room, dumped him into an armchair and threw a duvet and cushion over him.

It looked as though it was a massive struggle.

“As far as we know Owens came to the door, he did not break in.

“Robert had an alarm buzzer at the door so he would have known the door had been opened.

“His skull was fractured in five places and due to the force of the blows his head was almost severed.”

Robert lived in the family home alone and quite a character around the town.

Many would see him cycling around the town in a reflective jacket.

Alan went on: “I feel the whole system is wrong.

“Life should mean life. To think that Owens could be out in 16 years…that would make him 50 years old.

“If he took a life then he should remain in prison for life. It is the legal system that we want to challenge. We know the judges hands are tied.

“It is a disgrace such a sentence was handed down. The law is not there to protect the victims.”

Alan described the sentencing as an insult.

“I know the judges hands are tied but there is something wrong that this man killed my brother in the brutal way in which he did only to be let out after 16 years,” said Alan.

“ I know the judge considered this for some weeks so I know that it was not his fault. It is not justice. How can anyone call this justice. So many people are not being looked after by the legal system.

“We know that residents in Crumlin were living in fear of Owens. He had broken into houses before and stolen money.

Alan’s wife, Heather described Owens as a ‘moron’ and a ‘monster.’

“The viciousness in which he killed Robert,” she said. “It is only right that he should get life.

“Robert would not have given up easily and the scene of his house showed that.

“He was such a good kind person and it is in sharp contrast how he died. All he ever wanted to do was help people.

Alan said, that Owens took the very clothes Robert wore and put them in the river - they were never found.

“Owens stripped Robert and all he had on was his sock and underpants. He killed Robert and then goes and gets himself a Chinese.

The attack was only stopped when the parents of a child Robert tutored, called at the house.

It was so out of character for Robert not to arrive on time for his session that they were concerned and after many unanswered phone calls, decided to act.

“They did not even know where Robert lived and they asked about Crumlin,” said Alan.

“They saw someone inside when they called to the door but Owens placed an axe at the door to lock it.

“They went to the door and Owens climbed out the dining room window.”

Alan said that the family are only now getting the chance to mourn.

“This is just a waste of a life and it should not have been allowed to happen.

“We will try to get over this the best we can and do what we can to get justice for Robert.”