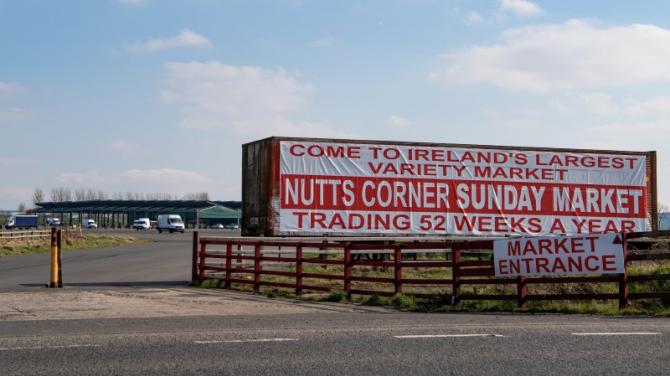 NUTTS Corner Market has closed to the public until further notice after a storm of outrage when it continued to run as normal on Sunday - despite Government advice about social gatherings during the coronavirus pandemic.

Thousands of people took to social media over the weekend to vent their anger that the partially open-air market was continuing to trade.

However supporters of the market said that self-employed traders would now be out of a job because of the backlash, and that attending the weekly pitches was ‘no different to going to Tesco or Asda’.

Others pointed out that the market was selling essentials including fresh fruit and vegetables, meat, fish and toiletries.

South Antrim DUP MLA Pam Cameron aid it was ‘disappointing’ that organisers had continued to go ahead with the Nutts Corner Sunday Market, which routinely attracts thousands of visitors.

“Now is not the time for complacency.” she said.

“Our NHS, families and whole society rely on us all taking the right steps now.”

Her party colleague, Airport councillor Matthew Magill said: “I have been contacted repeatedly this evening in relation to the news that market organisers intend to hold the market on Sunday March 22.

“Having consulted with council staff, I wish to clarify that the market is a privately run enterprise on private land.

“Antrim and Newtownabbey Borough Council have no legislative power in which to take any action in relation to its closure.

“I have attempted to contact organisers to no avail.

“I would appeal to the organisers to rethink their decision and cancel the market in the interests of us all.

“At a time when Government is pleading with the public to stay at home, it is utterly reckless of Nutt’s Corner Sunday Market to remain open.

“I trust common sense will prevail. Stay at home - Protect the NHS - Save Lives.”

UUP Alderman Mark Cosgrove added: “I’ve been advised that despite the advice of every medical professional and the selfless actions of thousands of our senior citizens and most ‘at risk’ people that Nutts Corner market is opening on Sunday.

“Irresponsible is an under statement.

“Council have no jurisdiction over this event but I would appeal for anyone to share this message widely and urge people who would normally go to the market to think of the potential implications of such a mass gathering at a time when families and communities are showing such discipline.

His party leader and South Antrim MLA Steve Aiken said it was ‘unbelievable’ and ‘gross irresponsibility’ for the market to open.

A number of members of the public threatened to use vehicles to block the entrance to the facility.

As it was, there was a low number of stallholders and visitors and the market was closed in the afternoon with a notice to say that it would not reopen until further notice.

In response to criticism on its' Facebook page, the market organisers said it was a ‘bit unfair’ for them to be ‘targeted’.

“Nutts Corner Sunday Market took as many precautions to help keep people safe, it has over 150 traders who depend on it for their living, take a look at any supermarket people fighting to get in,” they said, pointing out that beaches and parks were ‘packed like a summer’s day’.

“We followed the government and council guidelines to the letter and no one told us to close.”