(All) Saints alive! Taking a closer look at one of Antrim's most iconic buildings 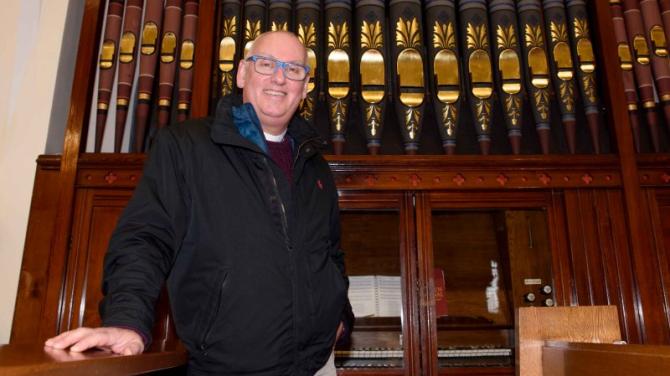 “This isn’t a museum, it’s a living, working church”.

So speaks The Venerable Dr Stephen McBride, Vicar of Antrim for over 20 years and Archdeacon of the Diocese of Connor.

It’s rare to see someone so enthused about the building in which they work, but All Saints isn’t just any old building, and Rev McBride isn’t any old clergyman.

All Saints has been described as one of the finest examples of Gothic and Elizabethan architecture in Ireland.

And the Vicar would know - he read architecture at the Queen’s University of Belfast and theology at Trinity College and was awarded the Doctor of Philosophy title in 1995 for research into 19th century church architecture!

He’s unlikely to lose the key of the church - it’s pretty hefty - but as he turns it, he pauses to remind us that the massive door he is opening is not ‘THE’ door.

In the Battle of Antrim in 1798, the churchyard was the scene of a fierce skirmish and the original oak door of the church received bullet marks and one bullet embedded in it.

The door was later removed from the church, presumably in 1816 when a new main entrance was built in the tower, and installed in the 'oak room' in Antrim Castle - where was later destroyed in the destruction of the castle in the fire of 1922.

It’s a big old church and it’s chilly - Rev McBride says he doesn’t like to think about how much it costs to heat - with the pilot light flickering into life at 5.30am every Sunday morning.

“We had over 400 people in on Sunday for a series of baptisms and some of the young ladies didn’t bring coats and they were freezing!” he said.

“The problem in a building like this is that all the heat goes up.”

The church’s original portion, dated 1596, is still clearly identifiable and the tower and spire of 1816, provides the town with its most dominant architectural landmark.

The original church was burnt, along with most of the town, in 1649 during a Royalist assault against the then Cromwellian force holding Antrim Castle.

The church is reputedly the fourth oldest in which the Protestant religion is celebrated in Ireland.

The church has major links to the Clotworthy family of Antrim Castle, and two rare examples of old European stained glass re-used in an Irish church are evident.

Stained glass windows include works by Aldam Heaton of London, Shrigley and Hunt of Lancaster and London, and two small scenes, including one of the beheading of St John the Baptist, incorporated in a window in the ‘Massereene transept’, reputedly brought from the continent by the 8th Viscount Massereene who died in 1816.

The transept was originally only for private family use, but is now open for special celebrations.

“They would have found these on their travels and incorporated them into their family church,” said Rev McBride.

“Not a lot of people in Antrim were able to travel back then, so the Massereene’s essentially brought a bit of the world back here.”

Sculptured wall memorials to the family dynasty include works by John Flaxman, J.R. Kirk of Dublin, one of the foremost monumental sculptors of his day, and Harry Hems & Sons of Exeter.

“The detail is amazing,” said the Archdeacon.

“Even things like the hands and knees of the sculpted figures, they look so realistic, they would have employed only the very best.”

Another memorial features a beautiful and delicate alabaster violin, with a deliberately broken string ‘so no one could ever play it again’.

Ardeacon McBride said: “The family motto is Per angusta as augusta.

“One of our former Mayors and also a parishioner, Paddy Marks translated it as ‘come to Antrim for your holidays in August’.

“It really means Per angusta through difficulties, through trials, through trying times - ad augusta comes honours, or greatness – augusta coming from the Latin root augustus which means exalted.”

Nothing about the upkeep of such an old building is cheap.

As well as the generosity of the Massereenes and other patrons, All Saints is also the beneficiary of heritage grants.

Anyone living or working with the town will be familiar with the church clock marking the hours - the process is now electrified.

But not everything has been modernised, like the clock in the Elizabeth Tower in Westminster, the pendulum of the church clock is so delicate that it is kept right by the addition or removal of copper coins!

The main stained glass window, completed by an English artist, is a sight to behold, but has required a lot of restoration over the years.

Cleaning can take months and requires a five-figure sum.

“Back in the days of the Troubles, people put up perspex or double glazing to protect stained glass from bomb damage.

“However some of the windows were tightly sealed and when the sun shone, the glass inside expanded and the lead bowed, meaning a lot of repairs were needed.

“Now we leave gaps at the top and bottom.”

Another window, replete with the eponymous saints, still fascinates the Archdeacon - he literally never gets tired of looking at it.

“The faces in particular are just amazing” he said.

The church is surveyed every five years, and when repairs or refurbishment is required, All Saints normally calls upon Consarc Conservation, led by Everest conqueror Dawson Stelfox, with whom Stephen studied.

The firm has worked on Queen’s University, the Albert Clock, Crumlin Road Gaol and Derry’s Guildhall.

“They bring together the best conservation architects in Northern Ireland.” says Rev McBride.

A recent kind gift from a parishioner enabled the organ pipes to be re-gilded, by Ruth Bothwell, who recently worked on the restoration of Hillsborough Castle, who was reportedly fascinated by the history of the church.

Her company, Decowell, has also worked in the Netherlands, the Kremlin Palace in Moscow and the Royal Palace, Kuwait.

There is also a plain marble plaque in the south wall of the nave to the memory of 'George Victor Du Noyer 1817-1869 Artist Geologist Antiquary'.

“It’s certainly not the most elaborate memorial in the church but I love it, it’s really elegant and understated, a piece of Irish stone.”

Du Noyer was born in Dublin in 1817 to French speaking parents of Hugenot descent and from a young age he showed precocious flair as an artist.

He was known for his work with the Geological Survey and became perhaps the most prolific Irish artist of the 19th century, producing hundreds of images which are still used as reference points today.

He and his wife Frances and their five children moved to Antrim in 1867, and the artist was ‘very taken’ by the County Town and his family thrived.

They took up residence in an address next to the old RIC Barracks at Castle Street and from that day on it became known as ‘The Frenchman’s House’ - ironic given that the man of the house was Irish through and through and spent his life celebrating it for future generations.

The house has since been demolished.

They were buried together on January 4.

The memorial was donated by Petra Coffery, a member of the Royal Society of Antiquaries in Ireland.

In 1997 she visited Antrim for the first time to see Du Noyer’s final resting place and to unveil the plaque in his honour.

There is plenty to see outside the church building too - dotted around the sides are ‘leper holes’ - a leper colony is understood to have existed in the town and the holes would have allowed them to hear religious services without getting to close to the healthy faithful inside.

As Reverend McBride explained, the ringing of the bell - now often associated with illness or uncleanliness - would have signalled that the most sacred part of the service was underway, to those gathered outside.

While no burials have taken place in the church grounds, elevated over High Street and Riverside for many years, there are some fascinating gravestones, many which have suffered erosion over the years.

One of the monuments is dedicated to writer Alexander Irvine, who’s ashes are interred beneath.

He became world famous for his book My Lady of the Chimney Corner, a love letter to his mother and Antrim town.

Growing up impoverished at Pogue’s Entry, he went off to study at Oxfod and Yale, was ordained a minister and returned an American hero after making his fortune.

“The church has such an amazing history, it might be old, but there have been many modernisations - including our very high-tech screen!

“We still have a vibrant and thriving congregation who love this place very much and I thank them for their care and appreciation of this very special building.”