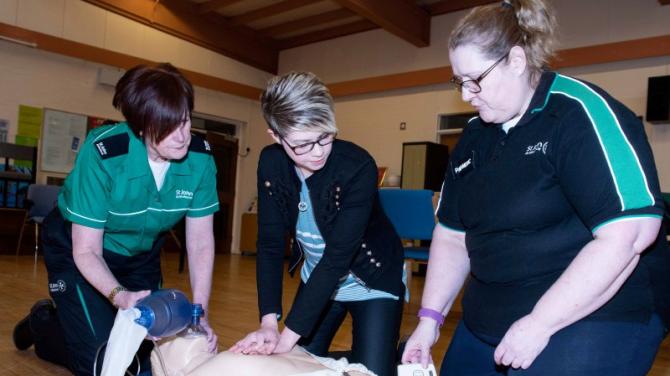 WE’VE all seen the unmistakable uniforms of the volunteers from St John Ambulance.

Whether it’s been as they keep a watchful eye at different events or while out fundraising to ensure they can continue to deliver their priceless service, there’s a certain comfort from knowing that these skilled individuals are there to help should they be needed.

The Antrim unit of the millennium old Order was established in October 1951 and is now approaching its 70th birthday.

Since its beginnings in the town, more than 250 volunteers have donned the iconic uniform and 2019 was their most impressive year to date with more than 9,420 volunteer hours recorded.

And these aren’t just recorded here in Antrim, with the 1,139 hours at ‘events’ including not only local sporting fixtures and the Enchanted Garden but also seeing volunteers travel to Twickenham, the Aviva, the Trroping of the Colour and New Year’s Eve in London among others.

Unit Manager for Antrim Ambulance Unit, Alan McClean was driven to get involved after the loss of his friend’s grandfather when he was younger.

He was staying overnight at the house when the man suddenly passed away and was involved in administering first aid for 40 minutes.

“Being involved has changed my life,” he said.

“I was a chef and this led me down a different career altogether.

“On top of the events where you sort of see us standing in a field, we supply non-emergency patient transport.

“Antrim is quite unique with a hospital on the doorstep and we’ve recently restarted the transfer service.

“When a patient has completed their hospital journey, we can take them home and sometimes the crew stay on a bit, make them a cuppa, deliver that social aspect.

“We also repatriate people, we’ve done that from Dublin and we would be involved in a major incident response, particularly given our key location for Belfast International Airport.

“There is the emergency side of course where we supply the ambulance to pre-planned events.

“We are equipped with the same skills as paramedics and the ambulance is stocked like a NIAS one so we deliver high quality care.”

Volunteers meet weekly where training and development is ongoing and they also take part in scenarios where major incidents are mimicked and play their role in fundraising, where they can often be seen at The Junction.

With their current ambulance now 12 years old, sourcing a replacement is a priority but the cost for this would be in excess of £60,000.

And Alan explained that first aid really can cover a vast number of things.

“You would be trained to deal with bleeding, bandages and slings, burns, choking, broken bones, drowning, strokes, allergic reactions, fits asthma attacks and much more,” he said.

“It can be patting someone, offering that reassurance after an accident for instance or in a panic attack, there’s that human aspect too.

“One in 10 of the volunteers in this unit will do CPR at some point in their lifetime so we can see how vital it is.

“Knowing to tilt someone’s head back can be enough to clear their airway.

“Becoming a St John volunteers gives you the knowledge and power to save people and to give them a second chance at life.”

Local councillor, Noreen McClelland was immensely impressed when she first attended a display put on by the Antrim Unit two years ago.

As a cadet in her youth who received her Grand Prior, she truly appreciated the service they provided.

When she was contacted mere weeks later to ask if she would consider becoming their President, she was thrilled to accept.

“I said I would do the first aid course as I wanted to be fully involved and it’s lovely that many of the volunteers I did that with are still here too,” she said.

“These are volunteers who are coming every week on top of a full time job and are making themselves available for the events and things that need covered.

“The sense of professionalism you see is truly inspiring and there’s a real family atmosphere about the unit too.

“Their enthusiasm is incredible and I couldn’t encourage anyone enough to consider doing the training and becoming a volunteer.

“I had this fear at the start about being able to react and deliver first aid but you gain such a confidence along with the skill set and you go into an autopilot mode.

“I was so aware before doing the training that I couldn’t do CPR if something were to happen and that’s ridiculous, it’s a skill we should all learn.

“You would underestimate how hard you need to do the compressions without the training.

“You learn and you’re assessed so you know you are confident in what you’re doing.”

While there are currently around 50 volunteers in Antrim, the unit is always delighted to welcome more and courses are run throughout the year.

Anybody interested can get in touch via social media or email for further information, or you can visit the new St John Ambulance website.

You can also donate money in person at The Junction or by contacting the St John Ambulance head office.

If you quote ‘AANTA’ the money you donate will remain in the Antrim area.

“Any donations will be gratefully received,” Alan continued.

“We need to replace the vehicle and we’ve had huge support from Randox but urgently need our own premises.

“There’s also all the equipment and supplies which need maintained and replaced.

“We are at the heart of the community and we care about the community we serve, without them, we couldn’t continue what we’re doing.

“We really are there 24 hours, day or night.

“If someone needs help then we will do everything we can to assist them.

“There really is no doubt that being involved is life-changing.”