Hats off to the Antrim milliner 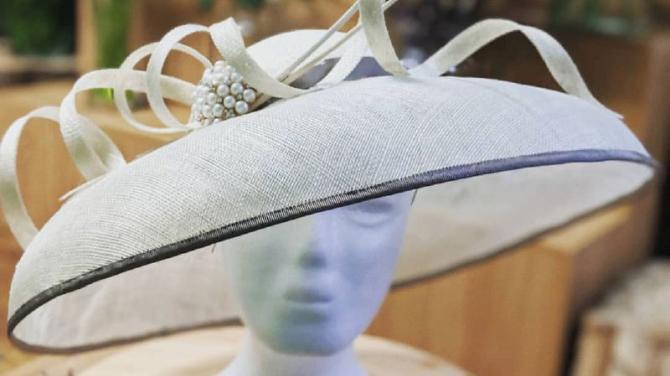 BY DAY, Ceara Fennelly, originally from Brantwood Gardens, is an aircraft dispatcher at Belfast International Airport.

In the evenings, her head remains firmly in the clouds with her hobby of millinery.

One of her proudest moments was seeing the face of popular local woman Jacqui Kirkwood Hamill, after she had asked Ceara to redesign a hat owned by her beloved late sister Beverly Parker, to be worn to a Royal garden party in Buckingham Palace.

“It was a real privilege when Jacqui asked me to work on the piece - I knew both sisters for years and I knew what a lovely woman Beverly was.

“Jacqui really wanted to wear that hat at the palace and felt it would be like taking Beverly with her, she would have been so proud.

“Jacqui burst into tears when she saw it and so did I, it was that emotion, the sparking of something in another person, which made me want to do something for other people too.”

Ceara lost her dad several years ago and credits working in Ivy Lane Floral Design Studio in Church Street with helping her mother overcome her grief.

Owner Helen Faulkner then invited Ceara to start displaying her work in the artisan area at the back of the shop.

A former activity and art therapist, Helen saw for herself the therapeutic and transformative effect of plants and flowers and decided to retrain and start her own business.

And it’s a match made in heaven, as both women are now making plans to run workshops in their field of expertise to help those suffering from loneliness, mental health problems and dementia.

A former pupil of St Malachy’s, Ceara said that she was always artistic, but that her desire to help other women to ‘look like a million dollars’ lead her down the road of millinery.

The family had always enjoyed days out at the races and as a child, Ceara was fascinated by the glitz and glamour of the well-dressed ladies.

Working in aviation also gave her a glimpse at what fashion-forward women were wearing to big events - from people flying out to Royal events or celebs jetting in to the likes of the MTV Europe Music Awards in Belfast.

“Arts, flowers and floristry definitely runs in the family, and with my mum working at Ivy Lane and me being in there all the time, I saw how floristry and milliery could work hand in hand.” she said.

Ceara attended a number of courses the length and breadth of Ireland, seeking the tutelage of top stylists and makers like the world famous Grainne Mather, Fee McToal and Niav Reilly.

“I definitely wanted to find my own style - I love Audrey Hepburn, I like the understated, classic look, nothing too off the wall!

“I start with an idea in my head and am led by the client.

“They will come to me and we can work through some sketches and work from there, and co-ordinating with the outfit is also very important, I love doing jewelled headpieces, or the more traditional mother of the bride hat.

“If it’s a wedding I work with the colour of the bridesmaids’ dresses and get a nice co-ordinated look and try to collaborate with the wedding party as much as I can.

“My childhood obsession with the race days also became a huge inspiration.”

Ceara only started up less than a year ago as ‘Four Seasons Millinery’ and credits the power of social media with her early success.

Whilst still a hobby, Ceara puts her heart and soul into her projects, which often take a week each or longer to complete, with everything made by hand.

She particularly loves working with felt and crystals and other items from a range of suppliers, including Belfast firm Abacus Beads and the late lamented Craftworld.

“I am naturally quite a shy person but I began working with Michelle Irvine in personal development, she is very much a believer in ‘what is for you, won’t pass you’.

“She encouraged me to just get myself out there and ‘live my best life’.

“I now believe that everything happens for a reason.

“So I began to put my work out there and try and set myself some goals.

“I caught the attention of bloggers and influencers, which helped get people talking.

“Someone would wear a hat or headpiece and put it on their pages and that will get hundreds of people looking at it.”

Among her clients in recent months have been Charlotte Tilbury models and make-up artists, who wore Four Seasons items to Down Royal, and other pieces have been worn at the world famous Galway Races.

Perhaps Ceara’s biggest endorsement by far has been from Derry Girls star Nicola Coughlan - most recently seen putting audiences in stitches during a Great British Bake Off apperance over the festive season.

“We were friends on social media and I messaged her asking if she would be interested in some items,” said Ceara.

“She couldn’t have been nicer and was very keen to support a local artist.

“I sent her two headpieces, one of which she wore during an appearance on Drag Race on TV, and then at her birthday party, which saw a headpiece that I made all over Twitter, Facebook and Instagram.

“She was so lovely to deal with and she looked fabulous.”

While social media has been a big boost for both women, both Ceara and Helen know that the personal touch and good customer service are the most important factor.

In Helen’s line of work, she sees families at their best and at their worst, at the happiest and saddest moments in their lives - for weddings, Valentines Day and Mother’s Day - and for funerals and anniversaries.

Her farthest flung customer orders flowers for his late wife from Australia and she feels a sense of pride knowing that people entrust such important work to her.

“Like Ceara, I have always been into arts and crafts.” said the former Antrim Primary, Ballyclare High and Antrim Grammar student.

“That’s why, as well as the floristry, I wanted an area where people who make things by hand can display their products too, it’s important that we in the creative industries can all support each other.

“I worked from home originally before opening Ivy Lane on Church Street.

“Online is important to boost your profile, but there is nothing like the customer being able to see and touch things and look at the size and scale.

“We laugh, we cry and we hug our customers.

“We see people at their most vulnerable and in moments of excitement and joy and we have loyal repeat customers because we have the personal touch.

“I train all my staff personally and I want to have the best people here to provide a real community service.

“If we get something wrong in an arrangement, we can fix it, but we can’t fix a broken relationship.

“When you walk in the door, you won’t be judged here, for me, customer care is very important.

“Even if someone doesn’t want to buy something, they can take someone’s card and contact them for a bespoke piece.”

Being part of the Church Street community is also important for Ceara and Helen.

Ivy Lane once houses a charity shop, solicitor, and a famous local sweet shop, as well as a family home.

It’s next door to Third Day Coffee, which was once the well known McCabe’s butchers.

Despite the tough times facing the retail sector, the ladies say that business is booming.

“I grew up on Fountain Street in a big old family home,” said Helen.

“Neither of us can remember Church Street being this vibrant while we were growing up.

“The public realm works have really brightened the whole place up and all the businesses support each other.

“We buy coffee and even have meetings with clients in Third Day, we eat out of Pizza Time, we get beauty treatments from Anita, wine frin The Vintage, Harman’s buy their flowers off us.

“And if there are flowers getting past their best, we give them to the salons or other businesses.

“We all help each other out and it’s great to see these great old buildings which are part of the town’s history, being used.

“There’s also the social side, we’re all popping in and out and we all have our regular customers.”

Helen is also able to utilise suppliers from all over the world, but working with such delicate products means that the business is sensitive to disease, drought, floods and other environmental factors.

“It can be hard to explain to a customer why something happening in Florida means that their bouquet might be delayed a little, but mostly people are very understanding.

“At peak times like Valentines Day or Christmas, or if there are weather issues, demand and prices sadly go up and when we are busy it’s all hands to the pump, I feel like a chef in a kitchen some days roaring out orders - my team is amazing.

“But we have a great relationship with all our suppliers, whether they be in Belfast, Lisburn or the Netherlands.”

In her previous life working with people with dementia and other illnesses, Helen saw for herself how the natural world brough great joy to people.

“There’s something about plants and gardening, the sights, smells, sounds, the tactfulness, that really seems to help people,” she said.

“I’ve seen people who can’t remember their friends and family’s names, recall the name of a plant from their childhood, patients loved to get out there and get their hands dirty and dig around in the soil and it gave them a real sense of accomplishment to plant things and watch them grow.”

Ceara agreed adding: “I think plants are good for the soul.

“When we lost my Dad, I think working with flowers really did help my Mum get through it, she had so much support and it was lovely to see her smile again.”

To that end, Helen is a keen supporter of the Lonely Bouquet movement, where free floral sprays are left at locations to brighten someone’s day.

The women are also both considering community workshops for local people, so that they too can have a go at floral arrangements or making a small hairpiece.

“Loneliness is discussed over the Christmas period but it doesn’t go away.

“We do have people who come in here and we might be the only people they may have spoken to all day.

“In terms of mental health, no one knows what others are going through.

“Giving and receiving flowers is one of the most positive things we can do and finding a bouquet might put a massive smile on the face of someone who is having a really bad time.

“We would both love to host something where people can come and meet new friends, talk to someone and learn a new skill and keep their brains active and occupied.

“The arts and making can be so therapeutic and we both have first hand experience of how it can change peoples’ lives for the better and we’d like to share that to the wider community.”

Both Ivy Lane Floral Design and Four Seasons Millinery can be found on Facebook and Instagram and the shop is based at 31 Church Street.