How light was shed on Antrim's 'black chapel' - and other stories! 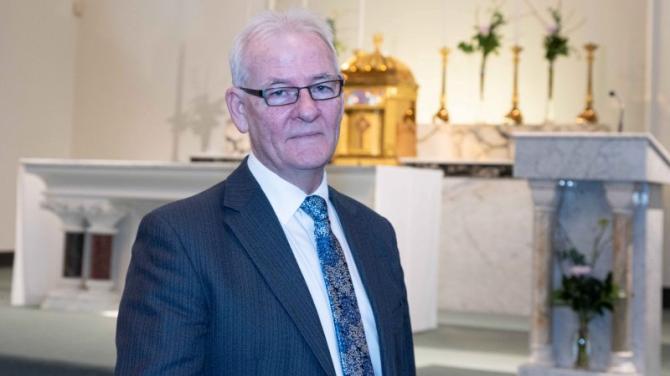 THE first thing that might strike many longer-standing residents about St Comgall’s in Antrim is that the building known as ‘the black chapel’, definitely isn’t as black as it used to be.

And the reason for the change in colour of the structure that for so long has dominated one of the main entrances to the town is...linseed oil, or lack of it.

But, more on that later.

Taking us on a tour of the church is the inimitable Brendan Smyth, Sacristan of the church and keen amateur historian, researcher and photographer.

His love of the building and the local area has been detailed in his book, Silent Night, Holy Night, ‘200 years of a Catholic Church in Antrim’ and there’s not much he doesn’t know about St Comgall’s.

At the start of the 19th century, the nearest Catholic church was in Randalstown, or Drummaul, as it was known.

The foundation stone was laid in 1818 and by 1820 it was complete and consecrated.

It accommodated 600 people with 60-80 ‘seat holders’, who paid for their heightened position.

Lord Massereene is said to have purchased seats for the servants at Antrim Castle.

However the congregation was growing and Father Henry O’Loughlin took over the project of building a new church.

The present building was constructed - by a team of just seven men - around of the old church, to allow services to continue, and when the new structure was complete, the inner sanctum was demolished and removed out of the front door.

Those men were Henry Madden from Randalstown and James Loughlan from Antrim, who worked with sculptor Samuel Percy from Kells and carpenters James Kennedy and John Fergus from Randalstown.

Completing the team were labourers Carlton and Hopkins, from Dunsilly and Duneane

A statue of the Virgin Mary which once stood at the entrance of the old church is now positioned on the south facing gable overlooking the graveyard.

Speaking of the front door - Brendan points out that we are actually standing on someone’s grave - but not quite.

“Father O’Loughlin lived in the sacristy and this church was a real labour of love for him,” he said.

“He even had a crypt built below the front porch here where we are standing.

“We knew nothing about it and found it during renovations in the 1970s, it is still there, lined with brick, but Father O’Loughlin is not in it.”

That’s because he had a disagreement with the Bishop, who wanted to divert some of the money being spent on the church to other projects, and Father O’Loughlin strongly disagreed - and he was chased off to Boston.”

Sadly the cleric died in America, after his project had been completed and consecrated in 1870, and never got to achieve his wish of lying at rest beneath St Comgall’s.

But he is definitely still here in spirit.

The distinctive black basalt stones were hewn from Hart’s Quarry at Magheralane and each piece was personally inspected by Father O’Loughlin.

Brendan says that those which did not meet his approval were removed, and local rumours have always persisted that those left over were ‘recycled’ and used to build the Protestant Hall on Railway Street - one can’t deny the stones are very similar!

Now, back to the colour of the stones.

No older resident in Antrim will be unfamiliar with the legend that was Father Vincent Davey, patrolling the town on his bicycle.

“Someone told him during the 1960s that linseed oil would help protect the building as the stones were porous,” he said.

“And men were sent up with paintbrushes to cover the whole church with the oil.

“What no one realised was, that the oil acted so well as a sealant, that the building could not breathe.

“The condensation inside was terrible, all the timbers in the roof rotted, there was water running down the walls and the floor.

“So during the big renovation in the 70s, up the men had to go again and spray it all off - it was a painstaking job and that is why the church looks a lot lighter now, between the removal of the oil and the weathering since then.”

Father Davey’s good friend was Revered Blackstock from First Antrim Presbyterian Church and the pair would meet up most mornings and keep a close eye on the local goings on, with local children straightening themselves up and looking on their best behaviour should one of the clergymen pass by.

The two men, alongside the local JP John Kerr and other notable Antrim personalities, were known to indulge in an inter-denominational poker school of an evening in the sacristy, which acted as a school by day.

Bicycles were discretely parked at the side of the chapel and smoke was often seen coming from a now-removed chimney in the room, late into the evenings.

At full capacity, the church can now hold 525 worshippers.

Whilst the interior is now stripped back and minimalistic in style, compared to the previous ornate decoration before renovation, there are still strong echoes of the past.

The beautiful ceiling cornicing would not look out of place in a National Trust stately home.

This detail also once ran along the walls, but the damp put paid to that.

12 columns once bore the faces of the apostles.

Four still remain, with one that is alleged to look very like Father Davey!

The altar table is stripped back and modern compared to its predecessor, but the beautiful tabernacle, the heart of any Catholic church, still takes pride of place.

Above on the balcony is the impressive organ, made by Evans and Barr of Belfast.

“You would not believe how many people have wanted to come here and play the organ,” said Brendan.

“We have had musicians from America, Germany, Denmark, Australia and Sweden.

“Apparently, it is one of the top ten in the organ world that people really want to play.

“One guy came recently, he flew from Sweden to Heathrow to Belfast and came straight here in a taxi and played for three hours, he set up a couple of recording devices.

“When he left, he said ‘that’s another one of the ten ticked off!

“It was last overhauled by a specialist company in Belfast about five years ago and the company were going straight to another job in Westminster!

“The acoustics in the building are amazing, everyone comments on it.”

Up in the sacristy - if only walls could talk - Brendan shows us a large aerial photograph of the church, which he says has a sad tale behind it.

However, it’s also worthy of a giggle, depending on how you look at it.

“There was a lady in the congregation who worked up at RAF Aldergrove who was getting married and she asked as a wedding present, could her colleagues fly the helicopter over the church and take a photo of the wedding party.

“As you can see, the gates are open, but the door is shut - they came an hour late and everyone had left.

“She gave the picture to me and I hang it up here.”

Behind the church is a former residential property where the curates now live - and of course, there’s a story behind what is now known as ‘the house of the bells’.

“As people will know, we have one big bell, the rope used to hang down into the porch, but it now works via a ‘solenoid’.

“A few years back, the parishioners were saving up for chiming bells and had raised a fund.

“However when the house came on the market, Father Davey only had the parochial house and he wanted to put the curates somewhere else, so he used the money to buy the house, the chiming bells never were bought and that is why the building is known as ‘the house of the bells’.

Another little known fact is that Father Davey would also take the bodies of patients at Holywell and Muckamore who died without any family, and bury them himself in the churchyard.

Before the days of motorcars, the priests used to have their own horses and carts.

The old stable building is now used as a store, and also a filming location!

“I was minding my own business one day and came around the corner and found a German soldier from the Second World War in full uniform standing with a gun.

“There was all sorts of activity in the yard.

“I climbed up the ladder into the hay loft to see what was going on and all I could hear was ‘cut! cut!’.”

A production company had turned the loft into a film set and a large wooden trunk where a young actor pretended to be hiding from the Nazis is still in situ.

The current Parish Priest is Father Sean Emerson, who has been in the role since 2009.

And what of the eponymous St Comgall?

He was the founder of the Abbey at Bangor but in 822 when the Danes plundered the majestic building the relics of the Saint were transferred to Antrim - a move he foretold before his death.

Comgall wrote a Rule for his monks which was quite severe, but its kernel is said to have been: “Love Christ and hate wealth”.

Comgall himself ate only once a day.

Miracles claimed for Comgall concern the sense of sight: he once healed a blind man by smearing saliva on his eyes and another time he caused blindness to fall on some thieves.