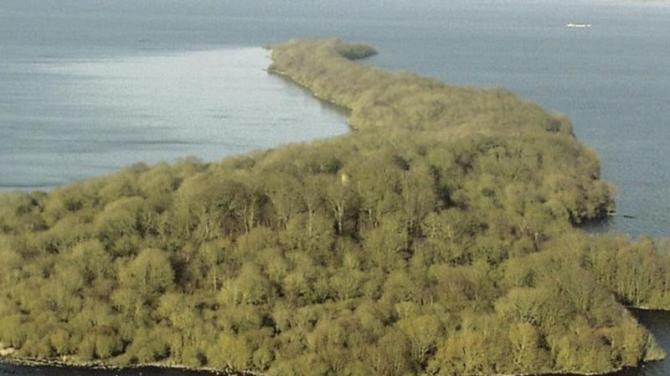 WELL, hands up - have you ever set foot on Ram’s Island?

I’ve yet to meet anyone who has, despite the fact that this six acre slab of green just a short boat ride from Sandy Bay is steeped in history.

It’s difficult to conceal an island one mile long by half mile wide, but for decades this often over-looked gem has been there - hiding in plain sight.

Many may not realise that it is home to a round tower and an ancient monastic settlement dating back to the ninth century. Unlike its big brother at the Steeple, the tower was destroyed during the time of the Viking raids, but it still stands 40 foot tall and remains a monument to the ingenuity of the people who somehow managed to get the stones to that remote and wild landscape a millennium ago.

Down the centuries many people have claimed ownership of what was then known as Innis Island.

For many years it was an elderly fisherman who saw it as a base to work the waterway. How he landed it in the first place is less clear, but he claimed it nonetheless ‘by prescriptive right’ - but every man has his price.

Conway MacNeice knew that all too well, and his was 100 guineas.

But it seems it was not to his liking and it soon changed hands once again to a chap by the name of Whittle, who acquired it in exchange for a farm.

And this was when the renaissance of Ram’s Island really began.

Whittle was a man with a plan and he set about clearing large swathes of the heavily wooded landscape and ‘did much to beautify it’.

The Glenavy man planted orchards and formal gardens, as well as hundreds of roses.

With the heavy lifting done, it was not long before word spread of just what he had achieved. And soon Lord O’Neill of Shane’s Castle came-a-knocking.

He made the local man an offer he simply could not refuse, and it has remained in the family ever since.

The good Lord added some modifications of his own too. He built a luxurious 19th century lodge in the shadow of the round tower and the parties held there were the stuff of legend.

Filled with fine wines and armed with rather large guns, his regular hunting parties were such a success that the island frequently had to be re-stocked because everything that once flew or scampered had paid a visit to the trophy room.

Rumour has it there were romantic liaisons too. Among them were Glenavy girl and courtesan Laura Bell (pictured below), who was said to be Lord O’Neill’s mistress for a time. He was in good company too, for she was also linked to Napoleon III and Prime Minister William Gladstone.

But with the great and the good - and possibly not so good at all - converging on his island paradise far from prying eyes, Lord O’Neill needed some hired help to keep the place spick and span.

And he did not have to look too far for just the sort of discreet workers to keep Ram’s Island ticking over.

The Cardwell family have a history going back generations. Indeed, their descendants still fish the waters off Sandy Bay.

They were a tolerant bunch too, even in those days of political upheaval across Ireland.

Take Henry Cardwell, for example. He was a Protestant and acted as land steward on Ram’s Island. He married Mary Ann Brankin, a Catholic.

Their son Robert was raised Catholic, but he married Jane Farr, a Protestant. History repeated itself when their son Thomas, who practices the Protestant faith married a Catholic, Isabella Crossey.

It was Jane and Robert who were to central to the history of the island, as they were to make it home for half a century making them the last permanent residents.

And both lived lives in wonderful seclusion. The land and water provided well for them. They feasted on trout in the summer and perch and pollan in the winter.

They kept a pig, geese, goats and gun dogs, which helped provide them with ducks and rabbits. There was a cow too, which provided milk which they churned to make butter.

Life could be hard, particularly in the bleak mid-winter, but it was good.

Jane meticulously cleaned the O’Neill summer house too, though she always maintained she had some special help. She claimed that two elves regularly dropped by to help her polish it to perfection. It was true. She had seen them with her own two eyes.

She would undoubtedly be delighted to know that the island today is dotted with carved statues of little people to honour their contribution to the household chores!

Jane out-lived her husband but joined him in 1933 when she died at the grand old age of 99. A cortege of eight fishing boats guided ‘The Queen of the Island’ back home to Sandy Bay and onto Glenavy where she now rests with Robert.

In the Second World War, the island was used as base for the Allied flying boats, its bays providing shelter. The location also made it a favourite for romantic trysts for soldiers camped at nearby Langford Lodge. Indeed to this day trees still bear the names of couples who dropped by in the 1940s!

One particular visit proved to be memorable for all the wrong reasons. A squad of American GIs stumbled upon the grand old summer house and decided to investigate.

Forcing their way into the dusty cellar they found, to their delight, that Lord O’Neill had generously left some of his fine vintage wines. They raised several glasses to their good fortune and ended up roaring drunk.

At some point the lodge caught fire and, sadly, was destroyed. Now only a bit of wall near the tower survives, but if those stones could talk...

With the house in ruins and the war over, the trips soon stopped and nature began to reclaim the island. Fishermen reported that ‘rats as big as cats’ were frequently seen on patrol from the tangle of dense foliage.

This jewel in the lough had lost it sparkle.

Or had it? By the late 1990s earnest attempts were made to restore Ram’s Island once again and show why it had, for a time, been considered a playground for the rich and famous.

That work was supported by the River Bann and Lough Neagh Association, who leased the island from Lord O’Neill in 2005 for the princely sum of £1 per year.

In time ‘The Island Warrior’ was put into service, ferrying people from Sandy Bay.

Picnic areas were cleared. Camp sites were created. Ram’s Island was back in business.

One of the principle players in the project was Michael Savage, skipper of the Warrior.

“The island was completely overgrown back then and the old pier had collapsed,” said the local man.

“We had a big job to do, clearing and creating paths. We had to get rid of the sycamore trees – they’re a weed – before they took over the island, and plant more silver birch, oak, ash and willows, and we wanted to replace the Spanish bluebells that were once planted here inadvertently, with indigenous ones.

“The problem was that after the Second World War, people would come out to the island and take the wild plants, such as snowdrops and azaleas, and sell them at Nutts Corner market and so on.

“We’re trying to restore it to its former glory and that also meant bringing in a ratcatcher for 18 months to rid the place of vermin, which had feasted on the eggs laid by birds along the shore.

“She did a great job – we got rid of the foxes that were killing the fowl too. They’d come over from the mainland on the ice when the lough froze over.”

Since then everyone from day-trippers to ghost hunters have made a bee-line to Ram’s Island.

Fancy joining them? Join the queue!

For details on sailings visit www.ramsisland.org