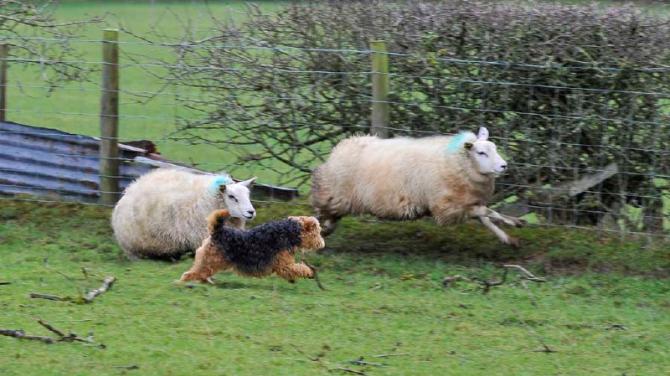 NFU Mutual and the Ulster Farmers’ Union are urging dog walkers to keep their pets under control while exercising on farmland following a series of attacks on sheep in recent days.

Following reports from farmers across the UK, the leading rural insurer is concerned that walkers taking dogs unfamiliar with farm animals into the countryside may not be aware that their pets could follow their instincts to hunt and attack sheep and lambs.

Recent attacks have included sheep killed and others injured across the UK, at a time when ewes and their new-born lambs are particularly vulnerable.

Rebecca Davidson, NFU Mutual Rural Affairs Specialist, said: “These horrific attacks have left a trail of dead and seriously-injured sheep and new-born lambs so we are urging dog walkers to keep their pets on the lead at all times when exercising them in countryside where livestock are reared.

“Walking dogs on a lead also ensures people can safely keep two metres away from others.

“Livestock worrying causes appalling suffering to sheep and lambs – and during the coronavirus crisis the threat of attacks it is adding to farmers’ anxiety when they are already under immense pressure. Even if a dog doesn’t make contact, the distress and exhaustion of the chase can cause a sheep to die. Many walkers are also failing to clear up after their dog, which can spread disease to livestock.

“Some farming areas are experiencing increased numbers of walkers with dogs, with farmers having to spend additional time patrolling flocks to try and prevent attacks which is hindering them from getting on with the vital task of producing food for the nation.

“There are real concerns that high numbers of people using farmland footpaths for exercise are putting older farmers in particular at risk.

“Together with the farmers’ unions, we are urging people to maintain social distancing of two metres apart and not put others, including farmers, their families and other rural dwellers at risk.”

UFU deputy president, Victor Chestnutt, said: “The issue of livestock worrying has not gone away and is a constant concern for farmers. During the Easter holiday season the number of dogs that will be on rural roads and country areas with their owners will increase and we urge everyone to make sure they have their dog under control at all times.

“It is not acceptable for any dog owner to allow their pet to roam freely through the countryside, especially where livestock reside.

“All dogs regardless of breed or size, pose a threat to livestock especially at this time of year when ewes are heavily pregnant and any chase by dogs no matter how small can result in a ewe aborting her unborn lambs.

“If owners lack control when in close proximity to livestock, the situation could escalate very quickly resulting in the death of one or more animals, causing serious financial loss and stress for the farmer.

“Dog owners must ensure that their pet is always on a lead when they visit the countryside. If they live in a rural area or near farms, it is their responsibility to make sure that the correct measures have been taken so their dog cannot escape from their home and engage in a livestock worrying attack.”

NFU Mutual’s claims figures show that livestock worth £1.2m were attacked by dogs last year. A survey of over 1,300 dog owners commissioned by NFU Mutual also revealed that 63% of dog owners let their pets roam free in the countryside, despite half admitting their dog doesn’t always come back when called.