A family at war 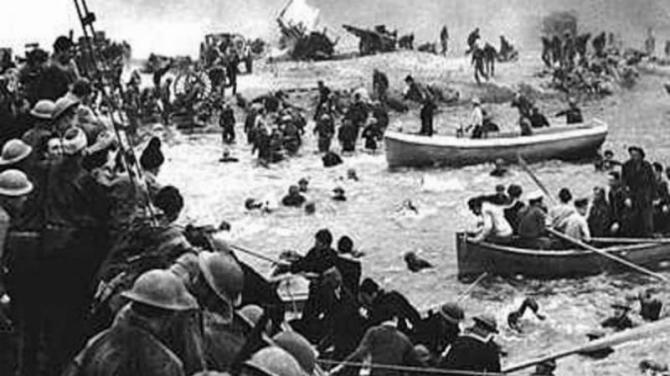 FORMER South Antrim MP Danny Kinahan has said that the VE Day 75th Anniversary will provide local people with an opportunity to ‘remember and give thanks for those that stood up to fight fascism and secure the freedoms that we enjoy to this day’.

The UUP man, who served in the military himself including a memorable stint on the Falkland Islands, has family who took part in some of the defining moments of the Second World War.

He believes their experiences, along with the heroics of their brothers in arms, stand as a warning from history - and their courage an enduring inspiration.

And while many of the greatest generation are no longer with us, their towering contribution must never be forgotten.

“As I stand in remembrance on this 75th anniversary of the Allies remarkable Victory in Europe Day, I will be remembering a generation or should I say generations,” said Mr Kinahan.

“This was a generation that brought me up, and from my own relations and their friends I learned stories of bravery, heroism and daring.

“It was these very same stories and their high standards that were so much of my early education of life as they knew it.

“My father, Robin Kinahan joined the 8th Belfast (anti aircraft) Regiment of the Royal Artillery and was sent with the British Expeditionary Force to France at the outbreak of the Second World War.

“Their individual batteries were sent to different parts of the battlefield, and so when the retreat to Dunkirk was ordered they had to destroy their guns - a task I know my father had no idea how to complete - and then head for Cherbourg and escape from there, as reaching Dunkirk was no longer possible.

“Once home their next major role was to sail round the bottom of Africa via Durban, to India and thence to Burma to help defeat the Japanese, as part of Field-Marshall Slim’s forgotten army.

“Indeed as Adjutant my father had to announce the terrific news of VE day to all his Regiment, and yet, we must remember that that stunning piece of news to them was tempered by the knowledge that they still had to fight on and defeat the Japanese.”

At the same time the Kinahans were anxiously waiting news about another member of the family languishing in a Japanese camp.

“My uncle Charles was a rubber plantation manager in Malaya at the outbreak of the war and joined the Malayan Defence Force only to be captured by the Japanese and forced to spend his war on the River Kwai, at the Emperor’s pleasure.

“He was very reticent to speak about it and yet his story is even more remarkable. It is very similar to that of the film ‘The Railwayman’.

“Uncle Charles spoke Malay and was allowed to trade with the local Thai villages for food and especially fruit and vegetables.

“However he also risked torture and death daily as he carried radio parts back into the prison camp hidden around his body.

“These radios were one of the very few means of keeping up morale in those appalling conditions.

“Uncle Charles even visited the camp after the war and met again with his captors.”

Quite a gesture after the horrors he and his comrades had endured.

Their stories left an indelible mark on a young Danny Kinahan.

“These are the people that we were brought up by, many of whom were reluctant to speak about their experiences wither because of the memories they brought back, or out of modesty,” he said.

“Sadly the funerals of so many of them and their colleagues over the past years have meant we lost their guidance but we can remember their bravery through their stories.

“A great friend of my father’s who was a fellow officer in the 8th Belfast and who later was also my father’s Best Man, fought through 20 miles of the German lines to show my father how to destroy his guns as the Germans advanced.

“In Burma the same friend won the Military Cross for holding off a Japanese infantry attack using those very same anti aircraft guns by firing them parallel to the ground at their attackers.

“Another friend, a Swordfish pilot, won a DFC for being the plane that critically damaged with its one torpedo the largest Italian battleship and as such took it out of the war.

“Another friend of my father’s lost his leg or rather part of his leg and was badly gassed at Monte Cassino and yet never complained about it.

“And another in the Royal Navy had to wait deep down in the engine room of his destroyer for the order to ‘reverse thrust’ as the captain on the bridge took urgent action to avoid the deadly dive-bombing of attacking German Stukas.

“Ashamedly when I was younger I took all this for granted.

“Could we have held our nerve as hordes of screaming Japanese infantry charged? Could we have flown 400 metres in a straight line without deviating whilst all the guns from a battleship we are firing at us and still drop that critical torpedo on target?

“Could we have ignored the injuries and agonies throughout our lives without complaint? Could we have waited calmly in the belly of the ship waiting for that order knowing that one well-placed bomb was going to sink our ship and drown our colleagues?

“These are the heroes of a generation we all salute this week.”

He added that his family’s service was no means unique.

“There will be so many families with similar stories of heroism whether in the Royal Navy, the Army and the Royal Air Force or in some other key defence role, not to forget those who served on the Home Front.

“Whatever their rank or role, this was a generation that we should never forget because they came together to defend our freedom and the freedom of the nations of Europe.

“We will remember them.”