Growing up in Antrim 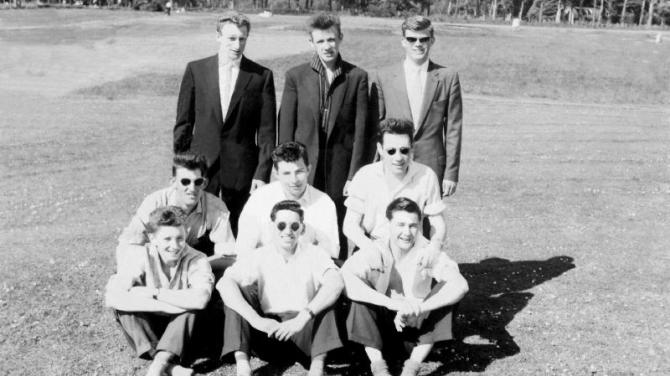 THOUGH I am not now living in my ‘home’ town I kindly received a copy of the Antrim Guardian recently from a good friend.

I appeared in a photograph of Antrim youths on Massereene golf course. The unknown youth in the picture was a visitor from Randalstown. From memory he was a cousin of William Creighton - and a cousin of John, who is also in the photograph.

The mystery of ‘no shoes’ is easily solved! We wrongly played played football with a tennis ball on the greens, often chased by irate members - even though, as irresponsible youths, we played in our sock soles to avoid damage.

There was also an inlet of the Lough which golfers often sliced their balls into. We often waded in and waited for a payment of sixpence for their safe return. The entrepreneurial spirit was alive and well!

I cannot leave Massereene, however, without mentioning an Antrim institution - the late Jimmy Hannan who had a sixth sense for finding lost balls.

He always had a pocket of golf balls for sale. In those days of austerity - now back again - he was popular with the golfers and earned a tidy sum. He diligently searched with a ‘magic stick’ in all weathers. I’d doubt if a police sniffer dog would be in the same league.

The piece in the Guardian reminded me of this Sunday ritual, but there were others.

The young, dapper Muckamore men walked into Antrim on a Sunday with their best suits on for show. They stood outside the Castle Cafe and eyed the ladies going past. In these politically correct times they would probably be called females.

I remember in those days the girls linked arms or held hands. It was perfectly innocent, of course, but it would raise a few eyebrows today.

To prove one’s manhood in Antrim there were two tests of passage.

Firstly, one had to swim across the freezing Cutts where the Sixmilewater turned into the Lough.

Lough Neagh is the largest fresh water lake in the British Isles and second only in Europe - by a few buckets full - to Lake Geneva, Ironically, it would have been first only for the farmers who got it lowered to increase their land boundaries.

Secondly, we had to ‘graduate’ from the Protestant Hall to Hall’s Hotel.

After the dance we, the ‘young uns’, had our mandatory bowl of home-made soup (thanks to Alice Fleming, my cousin) before heading home. It was always excellent.

I remember vividly that we sat in the walk through lounge in chairs none of us had at home - soft and plush.

Now, two loads of girls came down to Hall’s Hotel from Belfast on a Saturday night. Dare I say it, but some were married, some were divorced, some were separated, some were of more than average age, others did not enter for Miss Northern Ireland.

Despite this they were all escorted to their buses via the Market Yard. To this day we wonder why. Probably just good manners by our elder Antrim colleagues.

I was born beside Pogue’s Entry and as a child I witnessed the funeral procession of Dr Alexander Irvine, who went from absolute poverty and nettle soup in Antrim to become a much-loved church man in the United States - and world fame as author of ‘My Lady of the Chimney Corner’ written about his beloved mother.

He was from a mixed marriage. His mother was, by the standards of the time, a relatively well-to-do farmer’s daughter from the Lough shore. She was also a Catholic.

His father was a poor Protestant cobbler. There were desperately hard times but, as he wrote in his masterpiece, ‘love is enough’.

Irvine died in the United States but his ashes were brought home after the end of the Second World War to be buried with his parents in the grounds of All Saints’ Church.

I was there and saw them carrying his remains in a small casket. I shouted: ‘Mammy, mammy, the smallest man in the world is being buried’. It made sense to me at that age.

Such was his fame I recall American tourists visiting the grave and Pogue’s Entry. It was a dump then, but it is much better today.

Looking back those were happy days to be growing up in Antrim.

Herbie McCabe’s cows coming up High Street and Church Street from the Lough Road, dashing between a stream of lorries to get to Maggie Ann Jamison’s shop, being served an unwrapped loaf and two Paris buns by the beautiful Annie Miller (only for them to be pinched by an English tourist who was based at Hall’s Hotel) and, of course, chips from Billy Adams’ cafe.

Antrim was a much smaller but much happier and friendlier place.

There were no drugs (except aspirins from FT Smiths’ little chemist shop), little crime (assured by Constable Paddy Fox), no vandalism, no anti-social behaviour, little traffic, no parking problems, no paramilitaries and most definitely no sectarianism.

It was a model town for community relations.

This was due, in no small measure, to the late esteemed Father Vincent Davey. He was priest at St Comgall’s Church but he was popular with everyone. In fact some knew him as the Protestant Priest. He visited everyone in hospital, regardless of creed. A remarkable man.

The local police, doctors, teachers, bank staff, postmen and shop staff tended to stay in their posts for many years and were true pillars of the community. Unlike today, they were all well known and widely respected.

Antrim, the town I loved so well.

Those were certainly the days my friends!