The loss of the Lusitania 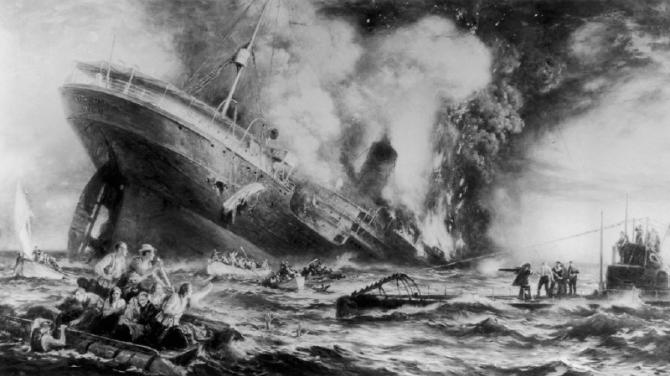 IT was the end of a busy book tour, as local man Archibald McIlroy prepared to board the RMS Lusitania from New York City, back to green isles of Ireland.

The date was May 1 1915 as commuters prepared to board the huge ocean liner, with its lavish surroundings and nine passenger decks.

Archibald McIlroy was looking forward to some well-earned rest after a successful business trip.

The RMS Lusitania was revered as somewhat of a marvel of the Atlantic.

Construction of the boat began in 1903 in Clydebank, Scotland, with the understanding that it would be the fastest cruise liner in the world.

She was also the largest passenger ship for a whole three years after her construction until her sister ship Mauretania was built in 1906.

Following a successful maiden voyage in September 1907, the Lusitania developed a gleaming reputation as ‘The Greyhound of the Seas’.

She held the Blue Riband appellation for the fastest Atlantic crossing, and had been decked out with a myriad of high tech wonders - including lifts, electric lights and cordless phones, with the on ship capacity for 2,198 passengers with 850 crew.

Yet, war hung heavy in the air and come 1915 she would slip beneath the waves she had sped across on her 202nd trans Atlantic crossing.

As early as autumn 1914, the entire North Atlantic had been declared a war zone.

By May 1 1915, German sub-aquatic warfare was intensifying. The waters around the United Kingdom had became a perilous field of battle - as RMS Lusitania set sail for Britain.

The cruise liner, it would appear, had become of increasing interest to German aquatic forces - because the RMS Lusitania had actually been modified from as early as 1913 in preparation for naval war.

Whilst dry docked in Liverpool, the liner had been fit with equipment to supplement warfare, which included munitions, ammunition, and gun mounts on the deck which were concealed under deck waiting for the addition of guns when needed.

Germany felt this, alongside the fact the watercraft flew no flags, rendered the ship a legitimate target.

The fact the cruiser was primed for alternative usage was hidden from the public - although, allegedly, printed fliers had emanated from the German Embassy in America highlighting the danger in traveling aboard the RMS Lusitania.

On May 7, the Lusitania was sunk by the German U Boat U-20 11 miles off the southern coast of Ireland, just off the Old Head of Kinsale. The initial torpedo, paired with a second internal explosion within the ship, caused the titan of the sea, to sink in a mere 18 minutes claiming the lives of 1,198 passengers and crew.

The explosions had been so devastating that only six of the 48 lifeboats were deployed. Just 761 souls were saved with the heroic help of passing boats.

Archibald McIlroy had not been one of the lucky few. Despite his many achievements in life, he is perhaps now best known for his tragic death.

The epic loss of life became a monument to senseless loss. It also undoubtedly nudged the Americans to join the war effort two years later.

Born in 1859 to a farming family, Archie McIlroy had always been eager to learn something new, and try his hand at different jobs.

After attending National School, his sights centred on Belfast, to study at the Mercantile Academy, and then the Royal Belfast Academical Institution.

A very talented and clever young man, he was met with quite the predicament as to whether to pursue training to become part of the Presbyterian Ministry, or enter work at the Ulster Bank. He resolved upon the latter, and Mr McIlroy served as a clerk for a decade.

After marrying a clergyman’s daughter, the restless McIlroy decided to put his financial acumen to good use by branching out into the world of business.

Ever eager to switch up careers, he became a Justice of the Peace and an active member of his local County Council, where he became an avid voice for the cause of land reform in late Victorian Ireland.

Deep down, however, Archibald McIlroy had a hidden talent for story telling - a talent which was heavily encouraged by his youngest son, who demanded tall tale after tall tale come bedtime.

His first book, ‘When Lint was in the Bell’ (1897) consisted of assorted sketches and recollections of his youth in Ballyclare - and it was met with praise.

Heartened, McIlroy released ‘The Auld Meetin’ Hoose Green’ the following year, a comedic reworking of stories his mother and Antrim locals had bestowed him with, all lovingly recounted in an Ulster Scots dialect.

The second book was even more popular than the first, praised on both sides of the Atlantic - and published even as far as Toronto.

Between 1900 and 1910, the Ulster man published five more books, and became an acclaimed lecturer.

Indeed, the success of his work encouraged him to travel far and wide for book readings, appearances and lectures which took a toll upon his health - which sadly got in the way of his pursuit in becoming an MP, yet not in the way of him working for a Presbyterian Church in Canada come 1912.

Archibald McIlroy had cemented himself as one of the most prominent Irish writers of the period, and was loved especially across the British Isles.

Due to his success, it was not of great surprise to family and friends that McIlroy was encouraged by American publishers to sail across to New York to meet with the Irish contingency, and regale them with tales of old Ireland.

McIlroy did just that - even traveling for several months around the States to a very warm reception.

By May 1, Archibald McIlroy was ready for home after a productive trip - where he somehow found time to complete the manuscript for his very last book which he was to deliver to his publishers in London once docked back in Britain.

Tragically, this manuscript was never to be read, and has been lost to the Lusitania.

McIlroy, alongside over a thousand other individuals, perished in the name of war.

Yet the people of his home town refuse to allow him to be lost as a statistic to tragedy.

In 2011 an Ulster History Circle Plaque was officially unveiled in Ballyclare town in memory of Mr McIlroy.

The turn out was more vibrant than the weather, as people celebrated the legacy of a father turned writer amidst music and exhibitions dedicated to the life of the local hero.

Within the Town Hall, Ronnie Hassard, then principle of Ballymena Academy and McIlroy’s biographer, dedicated an emotional speech to the memory of Archibald McIlroy, which was followed by Jeanette McKendry of the Ballyclare Historical Society performing a reading of excerpts from ‘The Auld Meetin-Hoose Green’.

Poignantly, at the unveiling, Martin McDonald, a member of the Heritage Lottery Fund NI Committee, said they were pleased to resurrect the name of an often overlooked literary hero.

“We are delighted to support the unveiling of this plaque to honour the life and works of Archibald McIlroy and of his connections to Ballyclare,” he said.

“The blue plaque is a wonderful way to raise awareness of the achievements of these local heroes, men and women whose contribution to the fields of the arts, science, academia and politics have helped to shape our society today.”

The sinking of the RMS Lusitania was a national tragedy, but behind the dramatic images of the vast vessel being dragged down were hundreds of individual tragedies.

When we remember what happened that afternoon in May, let us think less of the loss of the majestic ‘greyhound of the seas’, but more of the 1,198 promising lives all snuffed out too soon on a summer’s day.