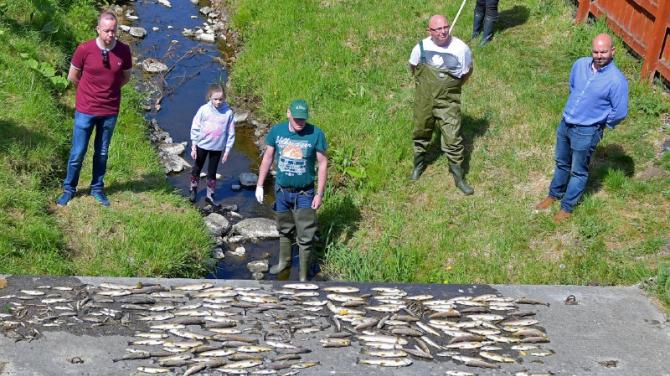 ANOTHER local river has been ravaged by a devastating fish kill.

On Friday morning (May 8) a member of the public alerted members of the Glenavy Conservation and Angling club to the fact that they had witnessed fish in the river showing signs of ‘extreme distress’.

A video showed one fish swimming in such a fashion as to be seemingly gasping for air and trying to escape the water altogether.

That alarming reaction has grim echoes to a huge fish kill on the Six Mile back in June 2008 when fish were observed throwing themselves out onto the bank. On that occasion it is estimated that 35,000 fish died.

As the morning progressed into afternoon the news became ‘increasingly distressing’.

“It was plain to see evidence of a major fish kill in the river,” said a spokesman for the Glenavy Conservation and Angling Club.

A member of the Angling club went with a fisheries inspector to try to ascertain the source of the pollution and if possible, the offender.

The source of the pollution was suspected to be in an area in Glenavy itself.

Above the site of the fish kill there was no signs of fish in distress and indeed fish were witnessed rising in a pool above the start of the upper limits of the kill.

“This in itself would appear to be a good indicator of where the incident stemmed from.

“The fisheries inspector told myself that the fish kill would run into the hundreds.

“The species of fish killed were Brown Trout, not stocked fish but wild trout.

“This does not take in to account of the numbers of other smaller fish killed as a result of this incident. Species such as Stone loach, an important fish that helps to maintain the cleanliness of the river bed by keeping unwanted harmful invertebrates in check.

“There were hundreds possibly thousands, of these little fish wiped out as well.”

Sadly it was not a one off.

“I feel that this river has suffered enough in the recent and not so recent past,” said the Club spokesman.

“There incidents have a depressing regularity.

“Every three to five years some form of a pollution incident is witnessed in this river.

“The residents of Glenavy and further afield are only too aware of the amount of conservation work that goes on in this river. They have always told us how much pleasure they take knowing that the river is clean, healthy and that it enriches their live immensely.

“These same people came out on Sunday morning to witness and show solidarity to the club, as they removed of hundreds of dead fish from a small stretch of the river in the actual village.

“Their anger was palpable they were rightfully aggrieved that one enterprise could inflict such damage to that which belongs to the whole community.

“The general feeling in the village is that this must stop once and for all.

“The past thirty years has not been kind to this river - be it from agri pollution or other commercial enterprises along the river corridor.

“But a history of mediocre response in respect of fines levied, prosecutions and punishments handed down have done little to deter these offenders.

“The club does not in any way want to stymie or discourage commercial enterprise in our community, nor does it want to see businesses closed down.

“However, it also wants the agri and commercial interests behave in a responsible non-selfish manner that respects and protects the environment as well as respecting the rights of the local community to live in a pollution free society.

“In closing I would like to thank the following persons for their help in responding to this incident, the local community of Glenavy, the Glenavy residents Group, our own group Glenavy Conservation and Angling Club, the inland fisheries inspectors, the NIEA, and local MLAs.

“Lastly thanks to Bert Trowlen for taking the time to bring this to the attention of the press.”